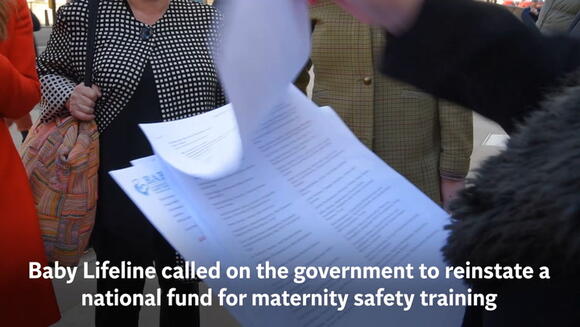 An image of a woman working while taking care of her newborn has horrified people online.

The photo has circulated on many social media platforms, including the antiwork Reddit forum.

“The other day, I was in BP and I saw this lady. She was the cashier. And she was taking care of her baby so patiently, so well, and so lovingly. All while working,” read the caption of the person who first posted the photo.

She added that the woman was still able to do her job well and “quick” despite having her child with her. 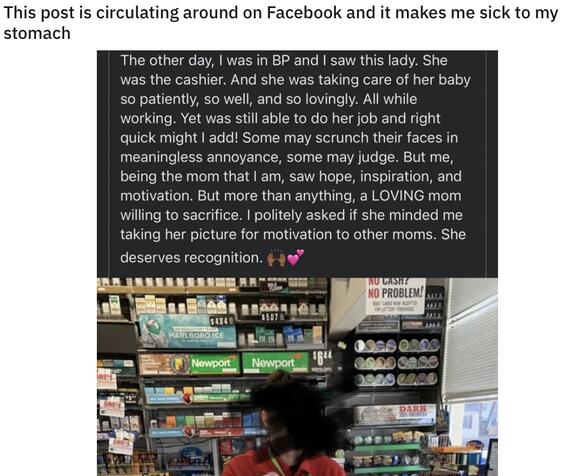 “Some may scrunch their faces in meaningless annoyance, some may judge. But me, being the mom that I am, saw hope, inspiration, and motivation. But more than anything, a LOVING mom willing to sacrifice,” the original poster continued.

The caption concluded by saying they had asked permission to take the photo as they wanted to have it for “motivation for other moms” and “she deserves recognition.”

In the image, you can see the woman working the cashier while carrying the child who has a baby bottle with them.

In the comments, people found the image anything but motivating, and instead deeply infuriating.

Many took issue with the fact that the woman was forced to work despite her circumstances.

“I feel so bad for that woman. I can’t imagine how hard her life must be,” wrote one person.

People also pointed out the toxicity of work culture.

“Nothing says motivational like framing the failures of capitalism as a feel good story. Hope the employee doesn't get in trouble as this spreads,” remarked a Reddit user.

Others called out the poster for taking a picture of the woman in the first place and referring to it as “motivation.”

One argued, “This isn’t motivation. This is not being paid enough to afford child care.”

“I also wanted to add the end kills me. “Taking a picture for motivation to other moms” This should not be a flex, or the norm,” read a follow up comment from the person who shared the image on Reddit.

Why are so many people judging this person? Do you know her circumstances? Maybe this is an isolated incident, maybe her babysitter was a no show. Maybe another employee was a no show and her boss ask her to come in for a couple hours until they could get someone else there to fill in and bring the baby if you need to. people are doing a lot of assuming here. Did anyone go to the source?

This is America. Money first, people last. Healthcare? Only if you can pay through the nose for it. No money, go home and die. We are hardly the best country in world anymore. Love of money is cancer to a society.

i was much like this mom with all 4 of my kids. They never got sick and are happy healthy kids who still rarely get sick. sometimes people have to take their kids to work. i did it many times while I was doing in home care giving. many of my clients actually enjoyed seeing the kids because they never had family that cared enough to visit them. I wish people would stop being judgemental. i know many people who own their own buissness and bring their kids. why shouldn't they be able to work and care for their kids.

"Not only was that so disgusting but she was also starving your child," one user commented.
FAMILY RELATIONSHIPS・20 DAYS AGO
People

Megan Fox wants her kids to express themselves however they please. In a wide-ranging interview with Glamour U.K. for their April cover story, the 35-year-old actress opens up about how she teaches her children, Journey River, 5, Bodhi Ransom, 8, and Noah Shannon, 9, about gender identity and encourages them to be confident in who they are.
FAMILY RELATIONSHIPS・20 DAYS AGO
Newsweek

#Newborn Baby#Internet#Bp
The US Sun

WHEN a young mom shared the rules she has in place for her toddler son, she expected backlash – especially because she doesn't allow others to give her child sugar and won't force him to share. Thousands of people weighed in on the mom's parenting choices, with some labeling...
FAMILY RELATIONSHIPS・20 DAYS AGO
Davenport Journal

Unfortunately, the 27-year-old mother and the 31-year-old father say their baby daughter has months to live. The 1-year-old child is suffering from a rare condition which was caused by a gene defect both parents carry. The parents knew something was wrong with their child when the baby started to go off her food at six weeks. The baby also started to lose weight, the couple said. The condition was confirmed with genetic testing and the doctors said it affects her ability to absorb the nutrients she needs from food. The condition is so rare it is thought to only occur in one in 79,000,000 people, the doctors said.
WEIGHT LOSS・21 DAYS AGO
KNX 1070 News Radio

A Dollar Tree manager in Bremen, Indiana was fired from their job after posting a controversial sign outside of the store last week. The sign apologized for the store being closed, and then called out the teenage workers at the store.
BREMEN, IN・21 DAYS AGO
American Songwriter

Gene Simmons of Kiss and several other musicians are beginning to react to the news of Elon Musk’s purchase of Twitter for $44 billion, questioning Musk’s desire for more “free speech” and how it may impact the spread of more hate and misinformation. “Fantastic news, at...
BUSINESS・21 DAYS AGO

Whether you frequent an upscale salon or a local barber shop, you might feel uncertain about how much to tip – and it’s no wonder. Tipping can feel arbitrary, and you might be unsure about your understanding of tipping etiquette. For instance, are there hard and fast rules around tipping, or is it up to your discretion? Is there a going rate? Do barbers and stylists expect a certain percentage? Is cash best? Do you tip salon assistants?
SCOTTSDALE, AZ・21 DAYS AGO
Grazia

Gender reveals have firmly become part of the 21st-century parenting journey. While once you had simply to decide whether to wait until your due date to know the sex of your baby, now you have the option of whether to shower your nearest and dearest with pink or blue fireworks, balloons, confetti, or cake to announce the big boy or girl baby news.
FAMILY RELATIONSHIPS・26 DAYS AGO
Upworthy

He's a regular gold retriever.
ANIMALS・20 DAYS AGO
The US Sun

A WOMAN has claimed she got very creative when it came to getting revenge on her ex who cheated on her. TikTok user @kykynicolee uploaded a video saying how she posed as a recruiter and put her love rat partner through a gruelling month-long job interview - before rejecting him.
RELATIONSHIP ADVICE・26 DAYS AGO
Newsweek

Bodycam footage captured the snake slithering around the room as an officer attempted to capture it.
BOYNTON BEACH, FL・21 DAYS AGO
The Independent

A wedding caterer has been praised for turning down all events where the bride and groom are asking their guests to pay for their own meals.In a recent post shared on the discussion-based site Mumsnet, a user explained that they run a “wedding catering company” that is “based on a food truck” and works for “less formal weddings”.They then revealed that some couples who have reached out to them about catering have been expecting their guests to purchase their own dinners at their weddings, a concept that the caterer said they have been “turning down” because they believe it is...
RELATIONSHIP ADVICE・22 DAYS AGO
Entrepreneur

Dorsey, who was CEO of the company until November 2021, took to the platform to pen his thoughts on the new changes.
BUSINESS・20 DAYS AGO
US News and World Report

It’s a story many have heard before. COVID-19 enters a household whether through a spouse, parent, sibling or caretaker – but despite extensive exposure, not everyone gets sick. [. SEE:. Latest Coronavirus and Vaccine News ]. And it could be a more common occurrence than some think. The...
PUBLIC HEALTH・25 DAYS AGO
Daily Mail

Walking at a brisk pace for just 75 minutes every week could cut your risk of depression, a new study finds. The World Health Organization recommends everyone should exercise for at least two-and-a-half hours every seven days. But researchers at Cambridge University, England, found adults who got half as much...
FITNESS・21 DAYS AGO
Newsweek

"I can't imagine how infuriating this must be for you," said one commenter.
PUBLIC SAFETY・20 HOURS AGO
Shreveport Magazine

According to the boy’s mothers, a teacher at the charter school decided to cut their son’s hair while he was in distress, instead of calling them for help. Now, the mothers claim that this will not go unnoticed until everyone is held accountable. The boy’s parents were reportedly upset that the teacher didn’t find a more effective way to help their son aside from cutting his hair. The boy’s mothers also said that their son was proud of the afro he was growing. “What made her think that this is OK? if you were going to help my child why wouldn’t you do it the proper way, common sense way, the helpful way? By getting him some real help?” one of the mothers said.
MINNESOTA STATE・20 DAYS AGO
Newsweek

The poster offered a solution for what someone should do should they see someone in the restroom they don't think matches the sign on the door.
RELIGION・21 DAYS AGO