BOSTON (CBS) — Brad Marchand’s star power was on full display last week, as the Bruins winger recorded at least two points in all four of Boston’s games. On Monday, the NHL honored him as the league’s First Star of the Week.

Marchand dominated the ice last week, leading the NHL with six goals and 10 points in his four games — all Boston victories. The highlight of his week came in Boston’s 5-1 win over the Montreal Canadiens last Wednesday, when Marchand tallied his fifth career hat trick in the victory.

Before that game, Marchand had a two-goal effort in a 7-3 Boston win over the Washington Capitals last Monday. Those two goals came after Marchand suffered a broken nose thanks to a stick to the face by Capitals center Nic Dowd. Marchand was stitched up to close the gash on his face and returned a short time later, finishing the win with two goals and an assist. 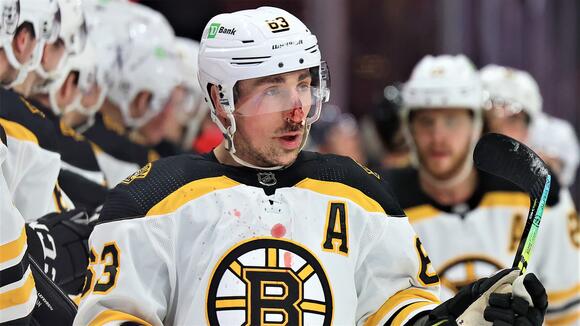 Brad Marchand shows off his fresh in the Bruins-Capitals game. (Photo by John McCreary/NHLI via Getty Images)

For the season, Marchand leads the Bruins with 20 goals and 23 assists for 43 points. He has points in 25 of his 30 games, including 13 multi-point games, but was not named an NHL All-Star when rosters were announced last week.

Hurricanes eliminate Bruins in first round, beating Boston 3-2 in Game 7

RALEIGH, N.C. (CBS) — The Bruins played well at home throughout their first-round playoff series against the Carolina Hurricanes, but they could never find an answer in Raleigh. And now, their season has come to an end. The Hurricanes defeated Boston 3-2 in Game 7 of their first-round matchup Saturday at PNC Arena. The B’s, despite winning all three of their games at TD Garden during the best-of-seven series, fall in the first round of the Stanley Cup playoffs for the first time since 2017. The Canes took the early lead with under 1:30 left in the first period. Teuvo Teravainen scored...
BOSTON, MA・2 DAYS AGO
CBS Boston

BOSTON (CBS) — The Bruins made their first move of the offseason on Monday. Two days after the team was knocked out of the NHL Playoffs, Boston signed defenseman Jakub Zboril to a two-year contract extension. The deal will have an annual cap hit of $1,137,500, GM Don Sweeney announced Monday. The 25-year-old blueliner missed the majority of the 2021-22 season after he suffered a torn ACL in December. He was limited to just 10 games with the Bruins, tallying three assists to go with 24 hits while averaging 15:44 of ice time. But Boston has not yet lost faith in Zboril, who was drafted by the Bruins with the 13th overall pick in 2015. He’s played in just 54 games for Boston over three seasons, dishing out 12 assists. Zboril has spent the bulk of his career in Providence, where he scored 11 goals to go with 46 assists and was a plus-35 over 182 games. With this new contract, he should figure into the Bruins’ defensive corps in the 2022-23 season.
BOSTON, MA・19 HOURS AGO
CBS Boston

BOSTON (CBS) — It’s only fitting that Celtics-Bucks is coming down to a Game 7. There was some doubt their second-round series would get there after Boston blew Game 5 at home, but the Celtics bounced back with authority in Friday night’s Game 6 in Milwaukee. Now this incredibly evenly matched series will come down to one final game at TD Garden for all the marbles — or at least a trip to the Eastern Conference Finals against the Miami Heat. Both teams are going to leave it all on the floor and both head coaches will do anything and everything...
BOSTON, MA・1 DAY AGO
CBS Boston

BOSTON (CBS) — The Celtics are moving on to the Eastern Conference Finals. Boston pummeled the Milwaukee Bucks in a deciding Game 7 at TD Garden on Sunday, 109-81, to finish off a classic second-round matchup between the two teams. Game 4 of the series belonged to Al Horford, while Jayson Tatum had his career game for Boston in Game 6. Tatum was still a star in Game 7, but Sunday belonged to Grant Williams. Williams had the game of his life, setting a new career-high with 27 points. The Bucks dared him to shoot and he did, hitting seven of his...
BOSTON, MA・1 DAY AGO

BOSTON (CBS) — Marcus Smart took a beating during Boston’s seven-game series win over the Milwaukee Bucks. Trying to guard Giannis Antetokounmpo does that to most players. The Celtics don’t have a lot of time to recover from that grueling series, either, with their Eastern Conference showdown with the Miami Heat tipping off Tuesday night in South Beach. After Smart took a huge fall in Sunday’s Game 7 victory over the Bucks, he’ll be bringing some bumps and bruises into Boston’s next series. Celtics head coach Ime Udoka revealed Monday that Smart suffered a right mid-foot sprain during Game 7, and will...
BOSTON, MA・16 HOURS AGO
CBS Boston

Robert Williams won’t start but is available for Celtics in Game 7 vs. Bucks

BOSTON (CBS) — The Celtics are getting Robert Williams back for Sunday’s deciding Game 7 against the Milwaukee Bucks at TD Garden. Or at least a little bit of Robert Williams back. The center is available to play in the winner-takes-all tilt in Boston, but he won’t start against the Bucks, Celtics head coach Ime Udoka announced in his pre-game press conference. Williams, who missed the last three games of the series with left knee soreness, will be used “as needed” on Sunday. “He hasn’t done a whole lot of basketball activity the last week. He’s been managing the pain. Structurally he’s...
BOSTON, MA・1 DAY AGO
CBS Boston

BOSTON (CBS) — Even after the Celtics ripped off an incredible stretch of basketball in the second half of the regular season, they still had their doubters. Sure, Boston was one of the best teams in the league after the new year, but lots of folks questioned if they had what it took to keep that going in the playoffs. So far this postseason, they’ve risen to every challenge thrown their way. A first-round sweep of the Nets was impressive, but their seven-game series win over the Bucks outdid that performance. Beating Giannis Antetokounmpo and the defending champs is exactly what...
BOSTON, MA・1 DAY AGO
CBS Boston

BOSTON (CBS) — When the Red Sox and Xander Bogaerts failed to agree on a contract extension ahead of the season, the shortstop said that he was done negotiating until the winter. He may be changing his tune a bit. Bogaerts’ future in Boston is one of the great unknowns at the moment. He can opt out of his deal at the end of the season, and while he continues to say that he would like to finish out his career with the only team that he’s ever played for, the Red Sox may not be too eager to give him...
BOSTON, MA・21 HOURS AGO