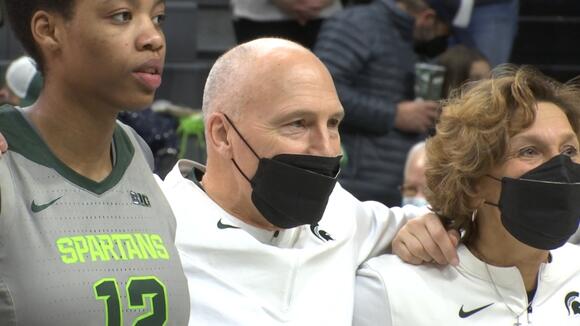 EAST LANSING, Mich. ( WLNS ) — It was Saturday morning when Michigan State women’s basketball coach Suzy Merchant found out she tested positive for COVID-19. It was then announced Sunday that Merchant would be unavailable for the home game against Northwestern.

That meant MSU associate head coach Dean Lockwood would serve as acting head coach until Merchant is cleared to return.

Lockwood has 40 years of coaching to his name, which includes winning two national championships (2007, 2008) as an assistant coach at Tennessee, plus six years as the Saginaw Valley State men’s basketball head coach.

The Spartans came out with a purpose against the Wildcats and turned it into a 65-46 win.

Nia Clouden led the way for MSU with a game-high 19 points, and right behind her was freshman Matilda Ekh, who scored 18 points on 6-10 shooting from behind the arc.

Michigan State has dealt with a lot of adversity this season due to injuries, COVID-19 and the transfer portal, so not having its head coach was just another thing to brush off the shoulder. It’s why this win called for a Lockwood water bottle shower after the game.

“It was heaven on Earth. For a win, you’ll take anything. Have them dump garbage on me, have them dump water on me. I don’t care. It was beautiful. The spirit of this team today was tremendous,” Lockwood said. “The sign of a great leader is you can remove the leader, temporarily, and the team still functions at a high level. And that’s a credit to Suzy.”

“We talked about, before the game, being tough today. Play tough, play for each other and play for Suzy,” Ekh said.

“There was a lot of motivation heading in because we knew (Suzy) would scratch, nail, and crawl her way into the game if she could,” Clouden said. “We called her at the end of the game and she was so emotional and proud of us.”

Maryland quarterback Taulia Tagovailoa had a lot on his mind this week. That was only natural after his brother Tua was stretchered off with a head injury while playing for the Miami Dolphins.
EAST LANSING, MI・2 DAYS AGO
WOOD TV8

Hurricane Ian had a Grand Rapids couple canceling their destination wedding in Florida just days before it was supposed to happen.
KENTWOOD, MI・3 DAYS AGO
WOOD TV8

A scheme to kidnap Michigan's governor in 2020 will get yet another airing in a different court when three men face trial Monday, just weeks before voters consider whether to reelect Gretchen Whitmer to a second term.
MICHIGAN STATE・1 DAY AGO
WOOD TV8

A 13-year-old girl from the Grand Rapids area who was believed to have left home with a man from New York has been found, deputies say.
GRAND RAPIDS, MI・14 HOURS AGO
WOOD TV8

The city of Battle Creek has hired a new fire chief.
BATTLE CREEK, MI・17 HOURS AGO

Man gets life for 2021 killing near Kentwood

A man will spend the rest of his life in prison for shooting and killing another man near Kentwood in early 2021.
KENTWOOD, MI・13 HOURS AGO
WOOD TV8

“To The Point” episode for the weekend of Oct. 1.
KENT COUNTY, MI・2 DAYS AGO
WOOD TV8

No injuries when airsoft gun fired into crowd at Woodland Mall

Someone used an airsoft gun to shoot at a crowd of people outside Woodland Mall over the weekend, police say.
KENTWOOD, MI・16 HOURS AGO
WOOD TV8

People will gather on the Blue Bridge in Grand Rapids this evening to honor those killed in domestic violence cases.
KENT COUNTY, MI・12 HOURS AGO

Firefighters responded to a gas leak in Hastings on Sunday.
HASTINGS, MI・1 DAY AGO
WOOD TV8

A $500 reward is being offered for the return of two stolen walrus skulls, according to the Ionia County Sheriff’s Office.
IONIA COUNTY, MI・3 DAYS AGO
WOOD TV8

A Battle Creek man has been arrested after attempting to break into a United States Postal Service Office and vehicle in Ceresco Saturday morning.
CERESCO, MI・2 DAYS AGO

An 18-year-old man was arrested Saturday in Bushnell Township after allegedly assaulting his girlfriend before firing a shotgun at her family.
MONTCALM COUNTY, MI・14 HOURS AGO