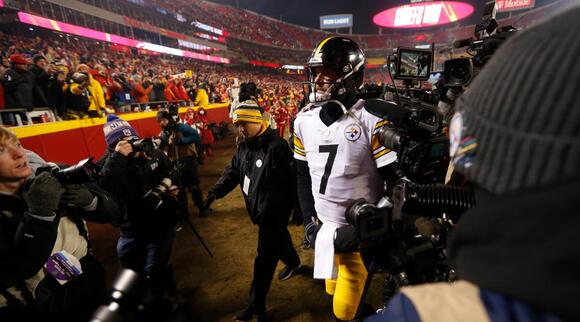 Ben Roethlisberger and Patrick Mahomes showed on Sunday that even Super Bowl winners can be fans of each other—even moments after one eliminated the other from the playoffs.

After the Chiefs' 42–21 wild-card win over the Steelers on Sunday, the NFL's cameras caught the two Pro Bowl quarterbacks planning a jersey exchange—although Mahomes made it clear he didn't want Roethlisberger's game jersey considering it might be the 39-year-old's final game with Pittsburgh .

“Not this one but I'm gonna get one of these at some point,” Mahomes said.

“I need one too,” Roethlisberger responded. “Me too then, alright?”

Mahomes starred in the win with 404 passing yards and five touchdowns on 30-for-39 passing. Although if it was Roethlisberger's final game as a Steeler , the franchise's all-time leader in wins went out on a high note by throwing for 215 yards, two touchdowns and no interceptions.

“I've been here a long time. It's been a lot of fun,” Roethlisberger said after the game . “... It was meant to be that I was gonna wear black and gold. ... I'm just so thankful.

For more coverage of the Steelers, visit All Steelers

The five teams with the hardest schedules in the 2022 season are from the same two divisions.
KANSAS CITY, MO・1 DAY AGO
Sports Illustrated

But how will change at QB affect Pittsburgh’s pass catchers?
PITTSBURGH, PA・2 DAYS AGO
Sports Illustrated

The Bills are doing their part to help the Buffalo community heal.
BUFFALO, NY・2 DAYS AGO

The former star running back took his wife’s last name and explained why.
NFL・1 HOUR AGO
Sports Illustrated

The Bucs quarterback caused quite a stir with his latest social media post.
NFL・31 MINUTES AGO
Sports Illustrated

Goodell Asked If Owners Plan to Remove Snyder From NFL

There has been a rumor circulating that some NFL owners are “counting votes” to remove the Commanders owner.
NFL・18 HOURS AGO

After backing up Josh Allen in Buffalo last season, can Trubisky be more than a bridge to the future with the Steelers?
PITTSBURGH, PA・2 DAYS AGO
Sports Illustrated

The soon-to-be former vice president has worked with the organization since 2001.
PITTSBURGH, PA・15 HOURS AGO
Sports Illustrated

He left NBC Sports to join Amazon this offseason but will return in a different role.
NFL・21 HOURS AGO
Sports Illustrated

NFL owners are reluctant to set a precedent for removing one of their own, but they could be moved to do so pending an ongoing investigation. Plus, insight on Kyler Murray and Aaron Donald skipping OTAs, the Colts’ decision to sign Nick Foles and more.
INDIANAPOLIS, IN・1 DAY AGO
Sports Illustrated

The 41-year-old has ultimately decided to stay on the sidelines.
NFL・2 DAYS AGO
Sports Illustrated

The league is considering an overhaul of the event, which is typically held the week before the Super Bowl.
NFL・22 HOURS AGO
Sports Illustrated

The third-year receiver could leap up further into elite WR tiers.
NFL・4 HOURS AGO
Sports Illustrated

One team on the west coast could be a major suitor when he hits free agency after the 2022 season.
NEW YORK CITY, NY・2 DAYS AGO