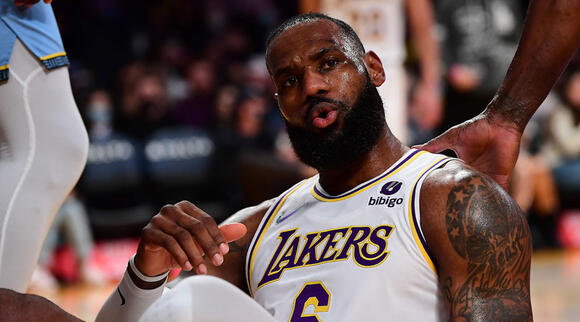 James may not have any room in his trophy case by the looks of it.

LeBron James has among the most awards in NBA history, with four championships, four Finals mvps, four regular season MVPs and plenty of other honors under his belt across 19 professional seasons. What James might not have is room in his trophy case.

While watching the Cowboys-49ers game on Sunday, James posted a video on his Instagram story from the view on his couch, and his TV setup went viral . Not because of his big-screen TV, but because of the four Larry O'Brien Trophies that were casually sitting in front of it.

Whether it was a flex or not, James had a great view of Dallas's loss. And the Cowboys may have something to learn from King James. While Jerry Jones's squad sports a 27-year Super Bowl drought, James has won championships with three different franchises. James, a noted Cowboys fan, likely wasn't pleased with the controversial ending to Sunday's game .

Shortly after the game, James tweeted an apology to Lakers fans for the team's recent woes. Los Angeles enters Monday night sitting at the No. 8 seed in the Western Conference with a 21–22 record.

For more Lakers news, head over to All Lakers .

The Lakers’ star took to Twitter to voice his opinion on a league-wide issue.
NBA・2 DAYS AGO
Sports Illustrated

The Golden State star hit big shot after big shot down the stretch as the Warriors jumped out to a 2–0 series lead over Dallas.
DALLAS, TX・1 DAY AGO
Sports Illustrated

Woods had a difficult day at the course during on moving day.
GOLF・23 HOURS AGO

Bet on this four-leg, same-game parlay at SI Sportsbook for Game 2 of the Western Conference finals between the Mavericks and Warriors.
DALLAS, TX・2 DAYS AGO
SPORTbible

Tiger Woods struggled to keep a calm head at the PGA Championships, losing his cool in an altercation with a cameraman. The golf legend didn’t have the best of starts on the opening day, stumbling to a 74 which is his worst start to a PGA since 2015. Woods...
GOLF・2 DAYS AGO
Sports Illustrated

The two, along with Joe Buck, worked together at Fox for 10 years.
NFL・1 DAY AGO
Sports Illustrated

The former No. 1 pick has been retired from the NFL since 2017 after 13 seasons in the league.
ATLANTA, GA・2 DAYS AGO

Tom Brady will join the network once he officially retires from his professional career, so a different analyst will be on the game.
NFL・2 DAYS AGO
Sports Illustrated

The guard will only play for the Jayhwaks in his senior season if he withdraws from the 2022 NBA draft.
KANSAS STATE・2 DAYS AGO
Sports Illustrated

The Warriors forward draws a lot of similarities between the 23-year-old and LeBron James.
NBA・1 DAY AGO

Now that Fox paid a hefty price for Tom Brady, here are some outside-the-box candidates networks could look to next.
NFL・2 DAYS AGO
Sports Illustrated

John Ruiz believes the Alabama coach was way off base with his comments.
MIAMI, FL・1 DAY AGO
Sports Illustrated

The six-time All-Star was ruled for the rest of Saturday’s contest against the Celtics after logging 20 minutes in the first half.
MIAMI, FL・15 HOURS AGO
Sports Illustrated

The Alabama coach clarified that his comments came from concern about NIL in general.
COLLEGE STATION, TX・2 DAYS AGO
Sports Illustrated

The sophomore already has sparked interest from 13 colleges.
NFL・2 DAYS AGO