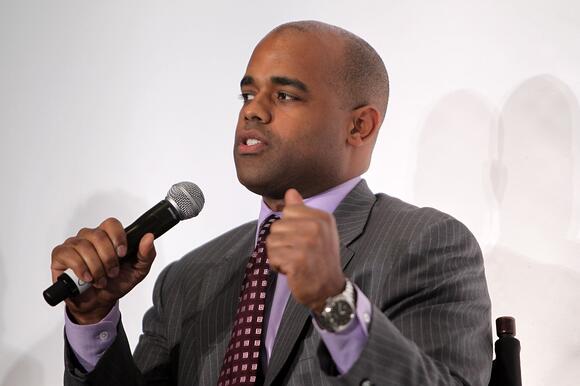 Vice President Kamala Harris’ new communications director, Jamal Simmons, will meet with members of the Congressional Hispanic Caucus in hopes of quelling controversy over a decade-old tweet that has angered immigrations rights advocates in the days since he was named to Ms Harris’ staff.

A White House official told The Independent that Mr Simmons’ meeting with the lawmakers will take place on Thursday and was “mutually agreed upon” by both the veteran Democratic operative and the Hispanic Caucus.

Mr Simmons, who started as Ms Harris’ top communicator last week, was brought on to fill the vacancy left by the resignation of Ashley Etienne, the former aide to House Speaker Nancy Pelosi who served as Ms Harris’ communications director for the first 10 months of the administration, and joined the vice president staff just one week after Symone Sanders, Ms Harris’ ex-senior adviser and chief spokesperson, decamped to MSNBC to begin hosting a weekly program on the cable network.

Though his hiring was meant bring a semblance of stability to the vice president’s office after the mini-exodus of top aides amid negative headlines, immigration activists began stirring the pot shortly after his new role was announced by resurfacing a tweet he’d posted in November 2010.

The offending missive referred to a pair of undocumented immigrants he’d seen making an appearance on MSNBC and asked his followers to explain why Immigrations and Customs Enforcement was not arresting them. That subject matter is particularly sensitive for Mr Simmons’ new role because Ms Harris has been given the task of addressing “root causes” of migration from south and central America.

One of the two undocumented immigrants who appeared in the television segment Mr Simmons referred to, RAICES Texas chief advocacy officer Erika Andiola, took to Twitter to defend Mr Harris after speaking with him by phone.

Ms Andiola said Mr Simmons had apologised for the tweet and she had accepted the apology.

She said he explained to her that his intention “was not to call for ICE to pick us up, but to understand the legality of how [undocumented] folks were on TV without possible legal consequences”.

“He explained that perhaps his question could have been, ‘what lawyer advised these folks to go on TV and tell people they are undocumented?. In 2010, it wasn't as common to see folks on TV telling the world our status. It became normal because of our courage and organizing,” she added.

In a tweet of his own, Mr Simmons said he apologised “for offending ppl who care as much as I do about making America the best, multiethnic, diverse democracy” and would represent the administration “with humility, sincerity and respect”.

He added that he has “never advocated for, nor believed that Dreamers should be targeted by Ice agents,” using a term for undocumented immigrants who were brought to the US as children by their parents.

Kamala Harris has slammed Oklahoma's proposed near-total ban on abortion, which was given final approval by the state's Republican-dominated legislature on Thursday (19 May).The proposed ban would outlaw abortion from the "moment of fertilisation" and only allowed in cases of rape, incest, or medical emergency."[The law] is designed to punish and control women... the power a woman has to make decisions about her own body I believe is directly connected to her power to make decisions about her future," Harris said.Click here to sign up to our newsletters.
OKLAHOMA STATE・1 HOUR AGO
WashingtonExaminer

When President Joe Biden named Kamala Harris as his running mate, he promised his former campaign rival would be one of the most influential voices in the White House.
PRESIDENTIAL ELECTION・23 DAYS AGO
Fortune

Never miss a story: Follow your favorite topics and authors to get a personalized email with the journalism that matters most to you. Russia has imposed sanctions against Facebook cofounder Mark Zuckerberg, Vice President Kamala Harris, Bank of America CEO Brian Moynihan, and 26 other Americans. The country’s Ministry of...
U.S. POLITICS・28 DAYS AGO
Salon

Rep. Marjorie Taylor Greene (R-GA) speaks to supporters of former U.S. President Donald Trump at the Banks County Dragway on March 26, 2022 in Commerce, Georgia. This event is a part of Trump's Save America Tour around the United States. (Megan Varner/Getty Images) On Monday, CNN's Andrew Kaczynski and Em...
COMMERCE, GA・23 DAYS AGO

Patricia Arquette has angrily confronted Elon Musk after he revealed his plans to vote Republican.Writing on Twitter earlier today (18 May), Musk explained that he has switched allegiance from Democrat as they have become a party of “division and hate”.He wrote: “In the past I voted Democrat, because they were (mostly) the kindness party. But they have become the party of division & hate, so I can no longer support them and will vote Republican. Now, watch their dirty tricks campaign against me unfold.”To this statement actor Arquette responded: “You say this with a straight face as Republicans roll...
CELEBRITIES・1 DAY AGO
Newsweek

The former adviser to Donald Trump said Putin probably needed glasses and ate and drank nothing at a dinner she attended, where the Russian president "barely gave her a glance."
POTUS・2 DAYS AGO
Fox News

Defeated Pennsylvania Senate candidate Kathy Barnette has placed blame for her third-place finish in Tuesday’s Republican primary squarely on the shoulders of Fox News host Sean Hannity. In a video posted to her Twitter account early on Wednesday morning, Ms Barnette thanked her supporters, but pivoted to attacking the Fox commentator.“I do want to say: never forget what Sean Hannity did in this race. Almost single-handedly, Sean Hannity sowed seeds of disinformation, flat-out lies every night for the past five days. And that was just extremely hard to overcome, apparently”.Ms Barnette’s grievance with Hannity stems from his decision to...
PENNSYLVANIA STATE・1 DAY AGO
Newsweek

The former president referenced scoring well on a cognitive test in 2018, which is designed to detect whether a person has early stages of dementia.
DELAWARE COUNTY, OH・25 DAYS AGO
Business Insider

An attorney for the campaign said they thought they were allowed to use the funds based on a "good faith" understanding of the "highly confusing" rules.
FLORIDA STATE・1 DAY AGO

Individual judges may not like the policy choices of the Biden administration, but it is not their job to weigh in on that policy debate.
TEXAS STATE・24 DAYS AGO
TheWrap

In a surprise to no one, Kimmel devoted much of his opening monologue on Monday’s “Jimmy Kimmel Live!” to roasting Marjorie Taylor Greene after the far-right congresswoman testified last week in a Georgia court about her role in the Jan. 6 Capitol riot. Kimmel — who was...
WASHINGTON, DC・23 DAYS AGO
The Independent

Nancy Pelosi sharply rebuked her Republican rivals on Thursday at her weekly press conference and challenged Republicans to a national debate over the issue of providing funding to address a critical shortage of baby formula.Speaking to reporters, she questioned why Republicans opposed a funding bill passed by the House this week that would provide $28m to address the shortage and give the Food and Drug Administration (FDA) resources to try and prevent future issues in the market.“What's the objection? That we don't want to spend money on babies who are crying for food? Ok, let's have that debate,” she...
CONGRESS & COURTS・4 HOURS AGO

Parents have expressed their frustration at the United States’ ongoing baby formula shortage after First Lady Jill Biden appealed for Americans to wait for supplies from abroad. Appearing in a video alongside US surgeon general Dr Vivek Murthy on Tuesday, Dr Biden accepted frustration at the two month shortage of infant formula.She said her husband President Joe Biden and his team were “working around the clock” on the issue, and that parents should consult their paediatrician for advice on alternatives. Her comments, which came days after US regulators reached a deal with baby formula maker Abbott to allow the...
U.S. POLITICS・1 DAY AGO
The Independent

Senate Majority Leader Chuck Schumer joined the chorus of voices accusing the right of spreading the same ideology as the shooters in Buffalo, Christchurch, El Paso and other attacks motivated by the racist “White Replacement Theory” belief.Speaking on the floor of the US Senate on Monday, Mr Schumer excoriated conservatives for spreading what he said were “echoes” of the same ravings that the suspect in the mass shooting that occurred over the weekend in Buffalo espoused in a lengthy manifesto posted online before the attack.“Unfortunately, with each passing year it seems harder and harder to ignore that the echoes...
BUFFALO, NY・2 DAYS AGO
The Independent

Congresswoman Lucy McBath shared her struggles with miscarriages on Wednesday to advocate for women's reproductive rights in the United States in the wake of a leaked draft opinion from the conservative-majority Supreme Court to overturn the Roe v Wade decision.Speaking at a US House judiciary committee hearing on the "ongoing crisis in abortion care access", the Georgia Democrat argued that the legislation introduced in right-wing states could impact the treatment of women who had undergone miscarriages and stillbirths."One day I woke up covered in blood. It is hard to describe the agony of a miscarriage. It is heartbreak, it's...
GEORGIA STATE・14 HOURS AGO