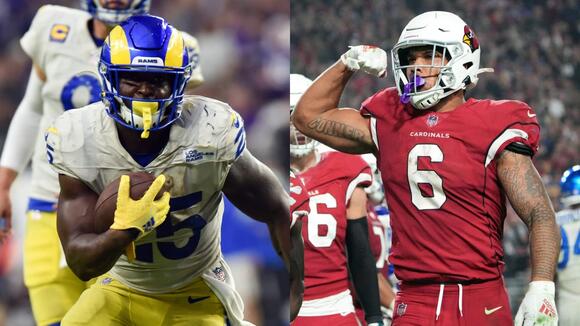 Cordarrelle Patterson is a free agent, and Mike Davis might not be back. Here's a look at five running backs the Atlanta Falcons could target in free agency.

The Atlanta Falcons could find themselves in need for more than one new running back in 2022. Cordarrelle Patterson is a free agent and coming off a breakout season, and Mike Davis just finished what he called the worst year of his career .

Davis carries a $3 million cap hit in 2022 , but he has just a $750,000 dead cap number. Getting $2.25 million back to invest in the team by cutting Davis could be a tantalizing prospect for general manager Terry Fontenot.

Here's a look at several free agent running backs, including Patterson that the Falcons could look to add before the 2022 season.

Patterson was arguably the free agent signing of the year in the NFL. Patterson helped the Falcons increase their win total from four in 2020 to seven in 2021 by leading the team in rushing yards and touchdowns as well as receiving touchdowns.

Patterson will turn 31 in February, an age where running backs start to go away, not flourish, but Patterson wasn't a full-time running back until this season. There is more tread on the tire than most 31-year-old running backs.

Patterson was second-team All-Pro by Pro Football Focus (PFF) and has indicated a willingness to return to Atlanta. He should be the priority target for the Falcons.

The Denver Broncos could be a factor for Patterson. He would make an excellent wild-card compliment to rookie Javonte Williams, and they have a ton of money available at running back because ...

Gordon is the most expensive of the free agent running backs by some distance. His $8 million salary in 2021 is $3 million more than second placed David Johnson.

He's coming off of a good season with the Broncos in which he had 918 yards and eight touchdowns while splitting time with rookie Javonte Williams.

The Broncos will be ready to hand the reins to Williams as their full-time RB1 in 2022, and Gordon will still want to be a feature back.

Normally that would put him out of reach of the cap-room-thin Falcons, but he won't get the $8 million he made on his last contract in the open market. If Patterson and Davis are both gone, the $5 million in savings would probably get the job done for Gordon on a two-year deal.

Michel is coming off of the final year of his rookie deal. His base salary in 2021 was $1.8 million. The New England Patriots declined his fifth-year option of $4.5 million, and he was dealt to the Rams.

Michel started just seven games for the Rams, but still managed 845 yards and four touchdowns in 2021. Michel is one of the younger options in free agency, and he has just 743 carries in his career.

A Florida native, Michel played his college ball with the Georgia Bulldogs, and he might be interested in getting closer to home.

Johnson has been a backup through most of his first three seasons with the Cleveland Browns. He was pressed into starting duty for two games and has looked terrific with more action in 2021.

Johnson had 245 yards on 41 carries in his starts against the Denver Broncos and the New England Patriots. He averaged 5.3 yards on 100 carries in 2022.

The Browns still have Nick Chubb and Kareem Hunt on the payroll for 2022, which could make Johnson expendable. If the Browns decide they want to clear some cap space, they could cut Hunt and sign Johnson to a new deal ... which would then make Hunt a viable free-agent option for the Falcons.

Both of the Cardinals leading rushers are set to be free agents after the season. Conner led the team in rushing with 752 yards and was selected to the Pro Bowl.

Edmonds is younger, cheaper, and had 592 yards on just 116 carries. His 5.1 yards per carry was significantly higher than Conner's at 3.7. The other big difference between the two stat lines is Conner's 15 touchdowns against Edmonds' two.

The Cardinals would probably like to bring both players back in 2022, but can they afford to keep both? Edmonds should be able to at least triple his money on the open market.

As of right now, Davis is the only running back on the Falcons payroll with an NFL carry, and he's on shaky ground right now.

Running back should be one of the most interesting positions to watch in the offseason. If the Falcons lose both Patterson and Davis this offseason, expect them to target a running back in free agency AND the NFL Draft for the 2022 season.

The Falcons have made a few moves in the wide receiver department lately.
ATLANTA, GA・23 HOURS AGO
Falcon Report

Sheffield will head back to his hometown of Houston via the waiver wire
HOUSTON, TX・5 HOURS AGO
Falcon Report

Follow along with Falcon Report for up-to-date news on the NFL firings and hirings
ATLANTA, GA・1 DAY AGO