What time is Emma Raducanu playing and how can I watch Australian Open match? 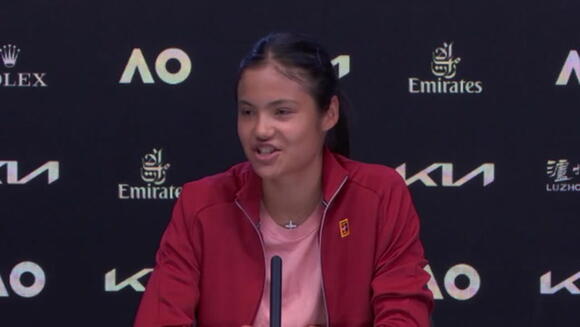 Emma Raducanu returns to Grand Slam action at the Australian Open , four months on from her remarkable US Open triumph, as the British No 1 takes on Sloane Stephens in Melbourne on Tuesday morning.

As far as first-round matches go, Raducanu has been handed a tough draw against another former US Open champion in Stephens, and the 19-year-old’s match will be last up in the night session on Margaret Court on day two of the tournament.

Raducanu comes into the match having suffered a heavy defeat to in-form Elena Rybakina in Sydney last week. “I feel like there’s actually no pressure on me,” she said. “I feel like I’m just happy to be here and have a swing. I had to jump a few hurdles to play here, so I just want to go out there and have fun and enjoy (being) on the court.”

Her first-round tie takes place at the end of a busy day of action for the British contingent in Melbourne. As well as Raducanu and Andy Murray, Harriot Dart, Emma Watson, Dan Evans and Liam Broady are also competing.

What time is Raducanu playing?

Raducanu’s match is scheduled to be the final match of the day on Margaret Court and will follow the tie between Alex de Minaur and Lorenzo Musetti, which is set to start at 8am GMT.

Raducanu will therefore not expect to be on court herself until around 10am GMT - although it could end up being later than that if the previous match goes the distance.

The Australian Open is being shown live in the UK on Eurosport 1 and Eurosport 2. The match will be streamed live and on demand in the UK on discovery+ . You can stream the match live by purchasing the discovery+ Entertainment & Sport plan, which is available for £6.99 a month.

When are the other British players playing (GMT)?

Nikoloz Basilashvili (21) vs Andy Murray - not before 4am

Liam Broady vs Nick Kyrgios - not before 8am

Iga Swiatek (7) vs Harriet Dart - after 12am, second on Rod Laver

Heather Watson vs Mayar Sherif - after 12 am, third on Court 8

What has Raducanu said?

“I feel like because of the last few months I’ve had, maybe I haven’t played as much as I would have liked to and trained so much.

“I feel like there’s actually no pressure on me. I feel like I’m just happy to be here and have a swing. I had to jump a few hurdles to play here, so I just want to go out there and have fun and enjoy (being) on the court.

“I would say the biggest challenge is to be patient. I’m a bit of a perfectionist. Whether that’s practice, whether that’s off the court, I want to be the best I can all the time. Sometimes it’s just not very viable.

“I need to just relax. As long as the trend is trending upwards, just a matter of small fluctuations, I think I can be proud. Whatever challenge that is, I feel kind of ready to face it now.

“I watched Sloane win the US Open. I hit with her last year actually. Obviously you don’t win a grand slam without being very capable.

“I think it’s going to be a tough match for sure. I’m going to go out there and enjoy the match because, just playing in this grand slam, I had to work so hard to be here.”