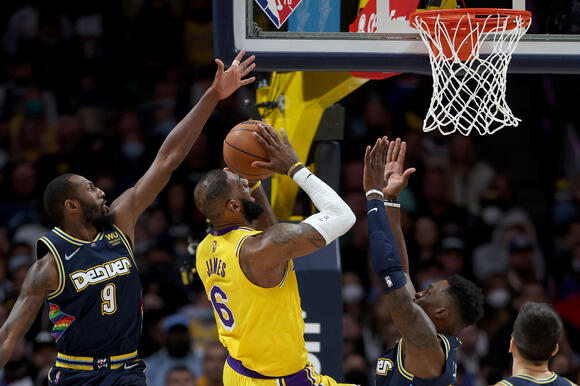 LeBron James of the Lakers goes to the basket against the Denver Nuggets at Ball Arena on Jan. 15, 2022 in Denver. (Getty Images)

The Denver Nuggets torched the Lakers by 37 points Saturday night. After a four-game winning streak, the Lakers have lost three straight to drop under .500.

They have a 21-22 record and are clinging to the No. 8 seed in the competitive Western Conference.

“#LakerNation I apologize and I promise we’ll be better!” James tweeted Sunday.

The Lakers came into the season with championship aspirations after trading for future hall of famer Russell Westbrook in the offseason. However, they have sorely underachieved.

With the oldest average roster in the NBA, their stars have struggled to stay on the court. James and Anthony Davis have missed a combined 28 games this season due to injuries. Davis has been out with a sprained MCL since mid-December.

After being blown out by the Nuggets 133-96, we as Lakes fans can accept being outplayed but we deserve more than a lack of effort and no sense of urgency. Owner Jeanie Buss, you deserve better.”

Magic served as president of basketball operations for the Lakers for about two years, from February 2017 until April 2019, when, just prior to the final game of the regular season, he abruptly announced he was stepping down . Johnson told reporters he was resigning even before he informed Buss. He was purportedly integral in convincing James to join the Lakers.

Rapper J. Cole will play another season of pro basketball, this time in Canada.The Canadian Elite Basketball League tweeted Thursday night that the 37-year-old rapper will join the Scarborough Shooting Stars in the coming season as a guard. The season begins May 25.Cole, whose full name is Jermaine Cole, played with the Rwanda Patriots in the Basketball Africa League in 2021. He also played basketball in high school in North Carolina.Cole won a Grammy in 2020 for Best Rap Song ("A Lot" by 21 Savage featuring J. Cole) and has several BET Hip Hop Awards to his name. He also has six platinum albums and produced songs for artists like Kendrick Lamar, Janet Jackson and Young Thug.His last album, "The Off-Season," came out a year ago.
LOS ANGELES, CA・1 DAY AGO
Inside The Warriors