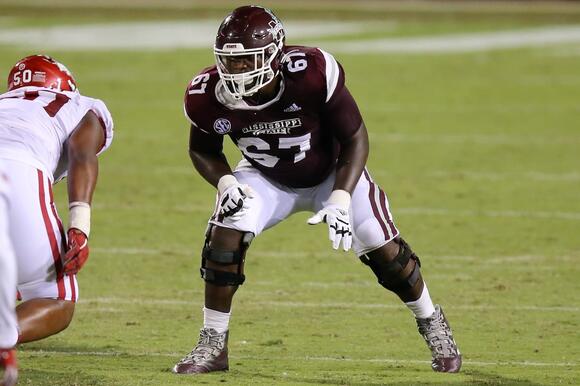 The notion of the Falcons protecting Matt Ryan should be at the forefront this offseason.

Matt Ryan was under duress consistently in the 2021 regular season. Opposing defenders pressured Ryan on 43 percent of his dropbacks, which was third-most out of all starting quarterbacks. In addition, he was sacked 40 times, which was the fifth most in the NFL.

For the 36-year-old, help should be on the way, as Terry Fontenot has a proven track record of addressing offensive lines. Before becoming the Atlanta Falcons general manager in 2021, Fontenot started as a scout for the New Orleans Saints before eventually working his way up to assistant general manager and vice president of pro personnel.

Here are just a few of his finds from when he became the Saints director of pro scouting in 2013 to his organizational departure in 2020:

With that being said, Pro Football Focus draftniks have identified another potential addition for Fontenot's list of quality offensive linemen.

The 6-5, 305-pound Charles Cross has logged 22 starts at left tackle for the Mississippi State Bulldogs in his three-year collegiate career.

As a pass-protector, he displays above-average athleticism that should translate to the next level, which will assist in keeping top-tier edge rushers at bay.

With an expensive Jake Matthews, it is possible that the Falcons can groom their left tackle of the future on the opposite side or even potentially shift Matthews back to right tackle, where he started his career for the team.

Either way, Cross provides much-needed pass protection for a veteran quarterback who desperately needs protection to maintain career longevity. Atlanta has lots of needs; this fills one of them.

Which undrafted players have the best chance to play on Sundays?
ATLANTA, GA・1 DAY AGO
Falcon Report

The Falcons aren't looking too good in these power rankings.
ATLANTA, GA・2 DAYS AGO

Falcons coach Arthur Smith may oversee a rebuilding situation, but he's all about winning.
ATLANTA, GA・2 DAYS AGO
Sportsnaut

A grand jury indicted former Georgia linebacker Adam Anderson on Tuesday and charged him with rape. Anderson will be arraigned
NFL・24 DAYS AGO
Falcon Report

Desmond Ridder is the key.
ATLANTA, GA・11 HOURS AGO

The rich get richer?
DENVER, CO・47 MINUTES AGO