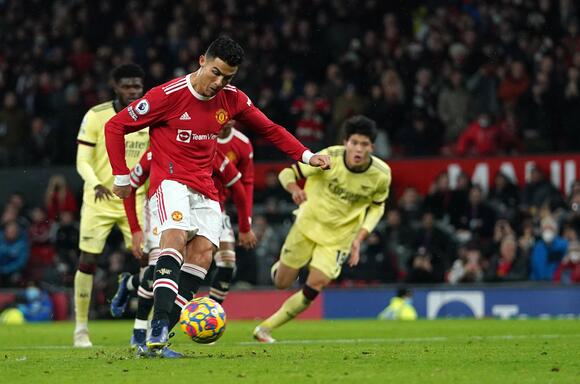 Across the current season and the previous three, the Red Devils have been given a penalty every 299 minutes – pipping Paris St Germain to top spot in England, France Spain, Germany and Italy and 10th in the 31 European leagues surveyed overall by the CIES Football Observatory.

Here, the PA news agency looks at how the Old Trafford club compare to their Premier League rivals and the rest of the continent. Liverpool manager Jurgen Klopp is among those to have drawn attention to United’s regular chances from the spot, claiming last season that the Red Devils “had more penalties in two years than I had in five and a half years”.

The CIES study will give him a fresh piece of evidence to point to, with United awarded penalties almost once every three league games since the start of the 2018-19 campaign – almost twice as often as Liverpool.

United are the only English club in the top 20 from the big five leagues, with nearest domestic challengers Chelsea 24th in that regard and 92nd in the study as a whole with one penalty every 419 minutes.

Manchester City (434) and Leicester (440) rank next among current Premier League clubs, with a big gap then to Liverpool and Crystal Palace with one spot-kick every 574 minutes – almost six and a half games. 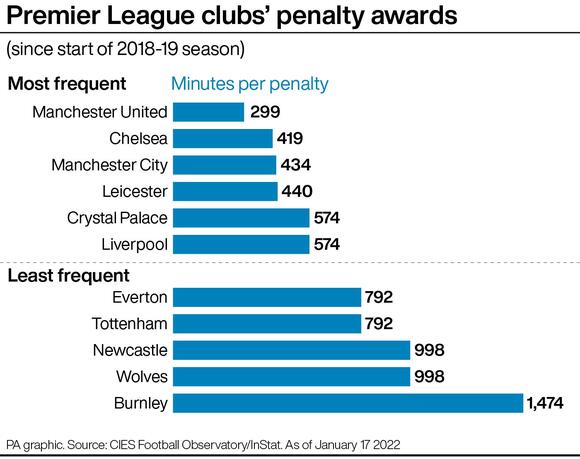 At the other end of the scale, Newcastle and Wolves each have to wait an average of 998 minutes – just over 11 games – for a spot-kick chance to come along, but spare a though most of all for Burnley.

The Clarets have had only eight penalties in the three and a half seasons covered, one every 1,474 minutes or just over 16 games. On the plus side, Sean Dyche’s side have scored all eight.

The Championship is also among the 31 leagues included and Bristol City’s astonishing average of 1,834 minutes between penalties – more than 20 games – is the highest in the study. Burnley rank third worst with the pair separated only by Israel’s Hapoel Hadera.

PSG are just behind United with a penalty every 305 minutes as Ligue 1 and Serie A dominate the picture in the big five leagues.

Lazio and Inter Milan, at 315 minutes apiece, and AC Milan and Juventus at 324 are next up with French sides Lyon, Lille, Lens and Monaco completing the top 10.

Real Sociedad are the top Spanish side while Borussia Monchengladbach and Leipzig lead the Bundesliga figures with one penalty every 397 minutes. In all there are eight French, eight Italian, four Spanish and two German sides between United and Chelsea.

The study, powered by data from InStat, also demonstrates another measure of United’s penalty luck. 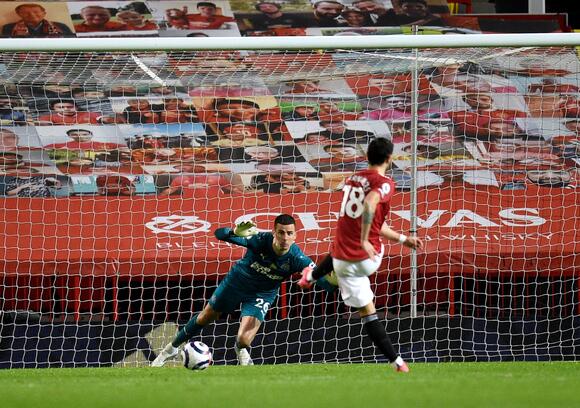 One in every 21 ‘big chances’ for United ends in a penalty – of the top 20 in the study from the big five leagues, only Genoa (18), Sampdoria and Metz (both 20) boast lower figures. Panathinaikos (15) come out on top overall.

Across all European leagues, Serbian side Red Star Belgrade lead the way with a penalty every 239 minutes, averaging 17 minutes fewer than second-placed Dynamo Kiev. PAOK, Slavia Prague, Galatasaray, Porto, Steaua Bucharest, Sporting Lisbon and Shakhtar Donetsk are the other sides ahead of United.

Spain to end ban on unvaccinated UK tourists in ‘a matter of days’, says minister

A Spanish government official has suggested that Spain’s strict ban on unvaccinated travellers from non-EU countries could end in “a matter of days”.The country’s Madrid minister, Reyes Maroto, told Spanish radio station Onda Cero on Thursday that plans were imminent for unvaccinated adults from third countries like the UK to be able to enter with a PCR test result.Ms Maroto said: “It will be a matter of days before we are going to eliminate a restriction that could be discouraging tourists from outside the European Union from visiting us, and that is that we are going to stop requiring the...
PUBLIC HEALTH・1 HOUR AGO
The Independent

Brentford will be on ‘max power’ against Leeds, Thomas Frank insists

Thomas Frank has warned relegation-threatened Leeds United his Brentford side will go full throttle for victory on Sunday.The Dane has no intention of easing up for the season’s final game despite the Bees having long since guaranteed their Premier League status.That could be bad news for Leeds, who head to the Brentford Community Stadium in the bottom three and needing to better Burnley’s result against Newcastle to avoid the drop.“The players train very hard, and I can’t see them taking their foot off the gas and not going max power on Sunday,” said Frank.“There can be that little bit of...
PREMIER LEAGUE・1 HOUR AGO
The Guardian

Jurgen Klopp believes Mohamed Salah and Virgil van Dijk are on course to be ready for the Champions League final but will not gamble on his top scorer’s fitness on Sunday when Liverpool go for the Premier League title and the Egyptian could win the Golden Boot.Salah and Van Dijk both missed Tuesday’s 2-1 win over Southampton after coming off in the FA Cup final with groin and knee injuries respectively and they face a race against time to feature against Wolves at Anfield.Klopp said it would be his preference to field each this weekend to get them match sharpness...
PREMIER LEAGUE・1 HOUR AGO

There were thousands of them on the pitch, celebrating Everton’s worst season for 24 years. Or more accurately, celebrating that it had not become their worst for seven decades. Relegation battles can do strange things and Everton, a fractured club and a failing team, have become united, a form of inspiration coming amid desperation, a fanbase who were often unhappy when they were higher up the league now jubilant, cavorting because safety was secured. A sense of peril, of imminent disaster, had channelled everything, brought everyone together. “People will say you are celebrating staying up but it means so much,”...
PREMIER LEAGUE・4 HOURS AGO
The Independent

Charles Leclerc will be hoping he can return to winning ways at the Spanish Grand Prix this weekend as he looks for a third victory of the season.Reigning world champion Max Verstappen became the first driver to secure back-to-back wins in the 2022 season when he followed up his Emilia Romagna GP triumph with another victory in Miami.However, the Red Bull driver remains 19 points adrift of Leclerc in the drivers’ standings due to his two reliability failures in Bahrain and Melbourne.LIVE: Follow practice from Spanish Grand PrixSo, if it is another battle between Leclerc and Verstappen this weekend, who...
MOTORSPORTS・1 HOUR AGO
The Independent

Hearts’ Scottish Cup embarrassment laid the foundations for their revival, according to sporting director Joe Savage.Robbie Neilson’s side face Rangers in Saturday’s final at Hampden Park aiming to end a 10-year wait for the trophy.It is a world away from last season when they crashed out to Highland League champions Brora Rangers 2-1 in one of the biggest shocks in the competition’s history.It sparked protests against owner Ann Budge but just 14 months later Hearts have finished third in the cinch Premiership and are guaranteed a return to Europe for the first time in six years.Savage has helped spearhead the...
SOCCER・3 HOURS AGO
The Independent

Accrington chairman Andy Holt has warned this week’s pitch invasions are a “disaster” for football which could lead to increased ticket prices to help cover additional security costs or even the return of physical barriers.The issue of crowd disorder and player protection is under the spotlight after the end of the regular English Football League season and the play-offs were marred by pitch invasions.A Nottingham Forest season-ticket holder, Robert Biggs, was jailed for 24 weeks after he deliberately charged at Sheffield United player Billy Sharp at the City Ground on Tuesday, headbutting him and knocking him to the ground.At Northampton...
PREMIER LEAGUE・4 HOURS AGO

Follow live updates from the opening day of action at the Spanish Grand Prix, as Formula One returns to the Circuit de Catalunya for practice ahead of the sixth race of the season this weekend. The talk among the paddock is all about Mercedes, after the team reportedly held a secret testing session in an attempt to figure out their performance struggles and catch up on the early pace set by Red Bull and Ferrari. F1 teams allow for two filming days a year where teams can run up to 100km in their current cars, enabling them to trial new...
MOTORSPORTS・3 HOURS AGO
The Independent

Frank Lampard ranked escaping relegation as “possibly at the top” of his managerial career after Everton secured their top-flight status with one match to spare thanks to a 3-2 win over Crystal Palace.The Toffees will play in the top flight for a 69th consecutive campaign – only Arsenal currently have a longer run with their 97th campaign coming up – but it was not easy.Having struggled all season to be in the situation where they were two matches away from potentially losing their long stay in England’s highest division, Lampard’s players made even more hard work of it in their...
PREMIER LEAGUE・4 HOURS AGO