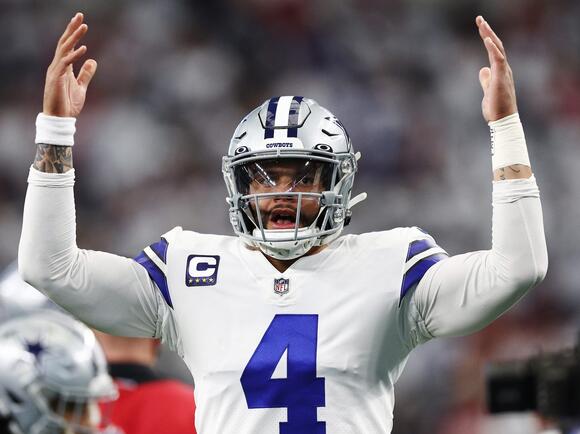 Dak Prescott has insisted that he thought the bungled spike which cost the Dallas Cowboys a shot at a comeback victory over the San Francisco 49ers on Sunday happened before time ran out.

The Cowboys had trailed the entire game at the AT&T Stadium, but got the ball back down 23-17 at their 20-yard line with just 32 seconds left and no timeouts.

And after getting the ball out of bounds on three consecutive plays to make it into San Francisco territory, Mike McCarthy's team found itself in range for a potential Hail Mary to win with just 14 seconds to spare.

Prescott instead chose to run with the ball, however, in an attempt to get closer to the end zone. He gained 17 yards on a QB draw, got up, and frantically rushed to spike the ball and get one last play in.

While Prescott was preparing for that final play, the official tasked with resetting the football collided with Prescott and his offensive line , causing a momentary but costly delay. By the time the ball was finally snapped and spiked, time was already up.

"I thought I did," Prescott said of the failed spike after the match, according to NBC Sports.

"I didn't hear what the ref said, what their announcement was. I just saw them running off the field and the Niners running on the field and celebrating, so understood what had happened."

He added: "We were going to get some yards and get down and clock it. It's something we've practiced over and over again. Ran. Went and got some yards. Went down. As I was getting behind Tyler [Biadasz], saw four seconds left.

"I thought there was obviously time to make sure everybody was set, and then honestly, just got hit from behind."

"Still, when I got up [under center], I saw two seconds," he continued. "I thought I could get the snap and get it down before time expired. I'm not sure what happened other than that."

Cowboys fans did not respond well to the mess at the final whistle.

Video circulated on social media showing fans throwing trash on to the field as the officials ran off and to the locker rooms.

Asked about the incident after the game, Prescott initially thought the trash was being thrown at the Cowboys players.

"For people to react that way when you're supposed to be a supporter, and with us through thick and thin, that's tough."

However, after a reporter informed Prescott that the fans had instead aimed the trash at the referees rather than the Cowboys themselves, he changed his tune.

Even if there was 1 minute on the clock. Dak still couldn't make a victory play. 😆 😆. 4 quarters in the game. He did nothing but throw bad passes. They had too many holding penalties. Goodbye !!!!!!!!!

he is against throwing trash at players but its ok for refs who are also out there doing their job the best they can. Prescott is overpaid and hurt his team demanding so much

Enough with the corcodile Tear's, Dallas was favorite by 3 points, played the game at home and lost..even if the pillow dude states, Dallas is magically going to appear in the Super Bowl, it's not happening Dak

Deion Sanders responds again to Nick Saban for NIL comments: 'This ain't about me'

Deion Sanders on the “I Am Athlete” podcast reiterated his unwavering disagreement with claims made by Nick Saban that Sanders paid a player a million dollars to play for him at Jackson State.
COLLEGE SPORTS・28 MINUTES AGO
Insider

The Warriors are nearing a run not seen since Michael Jordan, and appreciation for their dominance is at an all-time high

The Warriors are trying to make a sixth NBA Finals appearance in eight years as they cement themselves as one of greatest teams ever.
SAN FRANCISCO, CA・2 DAYS AGO