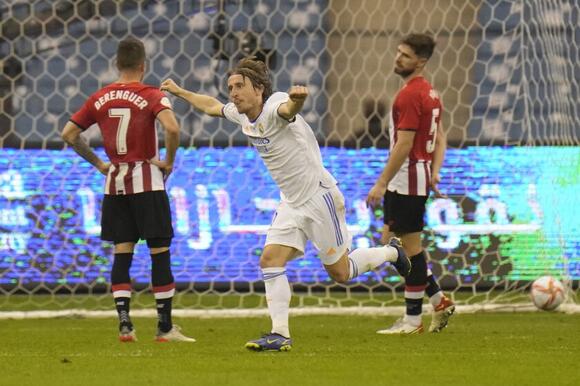 Luka Modric had just picked up his MVP trophy after the Spanish Super Cup final when Real Madrid coach Carlo Ancelotti started yelling at him from afar.

“You missed a pass,” Ancelotti complained, moving his arms as Modric approached. “You sent the ball to the sideline.”

The missed pass feels like the only thing that has gone wrong for Madrid this season.

Behind another solid performance by Modric and his teammates Sunday, Madrid comfortably defeated Athletic Bilbao 2-0 in the Super Cup final in Saudi Arabia to reinforce its status as the hottest team in Spain.

“It’s always important to win the first title of the season,” Modric said. “But there’s still a lot more to compete for in the Copa del Rey, the Spanish league and the Champions League. We have to keep this momentum going. We have been playing well, with a lot of confidence. This title will motivate us even more going forward.”

After not lifting a trophy last season for the first time in more than a decade, things have changed for the best for the Spanish powerhouse with Ancelotti having replaced Zinedine Zidane.

The veteran coach quickly put the team back on track, mixing experience and youth to make it more competitive than it was a year ago.

Karim Benzema has the perfect partnership with Vinícius Júnior in attack, while Eduardo Camavinga has added some freshness to an experienced midfield that has relied on Modric, Toni Kroos and Casemiro.

Ancelotti's Madrid has often given not too much attention to ball possession and has thrived on counterattacks, which is how it has made the most damage. That was the case both times it defeated Barcelona this season -- in the Spanish league at the Camp Nou and last week in the Super Cup semifinals.

Madrid also earned league wins against Atlético Madrid and Sevilla, which is its closest challenger, sitting five points behind with a game in hand. Atlético and Barcelona are more than 15 points behind Madrid through the halfway point.

Ancelotti's side has the league's best attack with 45 goals in 21 matches — 12 more than any other team. It also has one of the best defenses with 18 goals conceded, showing a balance that not always was there at the end of Zidane's stint.

Ancelotti has switched between formations often and said he is proud how the players have been able to adapt to different circumstances.

“We can play several different ways. That’s the strength of this team,” Ancelotti said. “I enjoy watching the team play. We are strong enough to fight for all the competitions that we still have left.”

Madrid is in the round of 16 in the Copa del Rey and in the knockout stage of the Champions League, the competition he won with Madrid in his first stint with the club in 2014.

The team's next match is on Thursday at Elche in the Copa del Rey. It plays Elche again in the league on Sunday.

Madrid will face Paris Saint-Germain in the last 16 of the Champions League in February.