Voices: My Jewish father taught me to use a gun for self-protection. I didn’t think I’d have to teach my own son 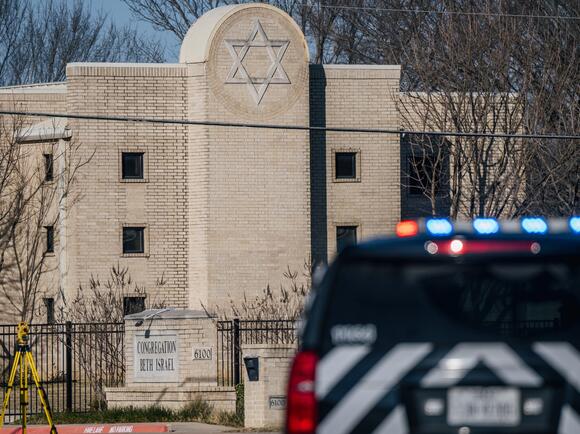 Pop pop pop ! The rifle kicked back powerfully as my dad showed my sister and I how to use a gun on a desolate gun range in the Arizona desert. This was decades ago.

“It’s not a toy. It’s a serious piece of equipment. Never point it at anything or anyone unless you are prepared to completely destroy it, because that is what guns do,” he explained, with a grave look on his face.

My parents, both military veterans (my dad was in the American army and my mom was a sergeant in the Israeli army) explained to my sister and I that, being Jewish, it would be in our best interests to become familiar – and comfortable – with weapons, should there ever be a time we needed to defend ourselves. It was a sobering discussion to have as a 10-year-old, but those who have experienced violent attacks firsthand understand the necessity of firearms used responsibly.

The 11-hour hostage drama this past weekend at Congregation Beth Israel in Colleyville, Texas, was yet another attack on Jewish life in America. This, when hate crimes and antisemitism are at an all-time high .

According to a 2021 report published by the American Jewish Committee, about one out of every four Jews in the US has been the subject of antisemitism over the past year. The report indicated 39 percent of American Jews changed their behavior in the past year out of fear of antisemitism, by avoiding things like posting online content or wearing items that would identify them as Jewish. Avi Mayer, managing director of public affairs for the American Jewish Committee who was tweeting at the time of the siege, wrote: “If you attend religious services without armed guards at the entrance and without fear of attack, you do not experience religious life as American Jews do.”

Unfortunately for American Jewry, there is a clear need for such physical security. It appears that we are going the way of other places in the world: in order to enter the shul in Florence, Italy, in recent years I needed to proceed through a metal detector; to gain entrance to attend services in Rome, a reservation and a show of my passport was required.

Today in America, during the high holidays, police officers and private security forces stand sentry outside many houses of worship around the country. There is a heightened sense of alert since the attack on the Tree of Life in Pittsburgh in 2019. Synagogues which maintain a sense of inclusion and openness have been forced to take stringent security measures to ensure the safety of their parishioners. Money that could be spent on education and other valuable projects is now being spent on security.

A day after the hostage-taking this past weekend, Anti-Defamation League CEO Jonathan Greenblatt issued a press release explaining how the ADL was asking for more federal funds to protect Jewish institutions. “With threats against synagogues and other Jewish institutions arguably at an all-time high, it is imperative that the federal government provides appropriate levels of funding to mitigate the threat,” he said. “As we saw in Texas, it is urgently critical for Congress to increase funding to protect these non-profit organizations from future acts of terrorism or hate-motivated violence.”

While it’s important to be vigilant and seek protection in the face of hatred, now more than ever is also the time to show up at religious services and to be proud of one’s heritage, because when one acts from strength, the world respects you.

The time I spent with my family on the range in the Arizona desert was life-altering. It fortified my understanding to always be aware of my surroundings, to always stand up for my heritage, and to always value and thank first responders who keep me from harm.

I would have thought that by this time, antisemitism might have decreased, rather than surging globally. Now, unfortunately, I have to figure out a powerful way to pass down these same values and lessons to my own son.

Masada Siegel is a writer and crisis communicator in Scottsdale, Arizona

all my kids an grandkids are well trained on guns an safety, an all are good shots with pistols an rifles

Well, I am not Jewish. But If I see any threat to a Jewish person, they will have me to contend with. And I am always armed.

Sen. Ted Cruz (R-TX) abruptly walked off from a British journalist’s questions about gun violence in America two days after an elementary school massacre in his state left 19 children and two adults dead. Cruz, who is due to appear at a National Rifle Association convention this weekend, became...
CONGRESS & COURTS・23 HOURS AGO
Rolling Stone

Click here to read the full article. The family of Irma Garcia — one of the two teachers who sacrificed their lives to save their students at the Robb Elementary shooting in Uvalde, Texas — is now also mourning the loss of another family member. Garcia’s husband, Joe, died Thursday of a heart attack, minutes after dropping off flowers at her memorial, The New York Times reports. “Extremely heartbreaking and come with deep sorrow to say that my Tia Irma’s husband Joe Garcia has passed away due to grief,” wrote John Martinez, Garcia’s nephew, on Twitter. “I truly am at a...
UVALDE, TX・18 HOURS AGO
The Independent

Sarah Sanders jumps on Texas shooting to justify ban on abortions, not guns

Former White House press secretary Sarah Sanders, who won the Republican primary for Arkansas governor, used her victory speech on Tuesday to call for a ban on abortions while mourning the Texas school shooting deaths.Ms Sanders said that the shooting in Texas’ Robb Elementary School in Uvalde, in which at least 19 children and 2 adults were killed, was a “stark and humbling reminder of just how precious life is”. “Every single life has value and the most vulnerable among us are the ones we should be fighting for and protecting the most,” she added.“I can assure you that...
TEXAS STATE・1 DAY AGO
The Independent

By now it's as predictable as the calls for thoughts and prayers: A mass shooting leaves many dead, and wild conspiracy theories and misinformation about the carnage soon follow.It happened after Sandy Hook, after Parkland, after the Orlando nightclub shooting and after the deadly rampage earlier this month at a Buffalo grocery store. Within hours of Tuesday's school shooting in Uvalde, Texas, another rash began as internet users spread baseless claims about the man named as the gunman and his possible motives.Unfounded claims that the gunman was an immigrant living in the U.S. illegally, or transgender, quickly emerged on...
UVALDE, TX・1 DAY AGO

UK's Dunblane grieves for Uvalde, fears nothing will change

When Mick North’s 5-year-old daughter was gunned down at her school, he vowed through his grief that it must never happen again.And it hasn’t — in Britain, at least. The 1996 massacre of 16 elementary school students in Dunblane, Scotland led to a ban on owning handguns in the U.K. While Britain is not immune to gun violence, there have been no school shootings in the quarter century since.The United States’ deep-rooted gun culture makes similar action unlikely in the wake of the killing of 19 students and two teachers by an 18-year-old gunman in Uvalde, Texas.North, who helped...
PUBLIC SAFETY・2 HOURS AGO