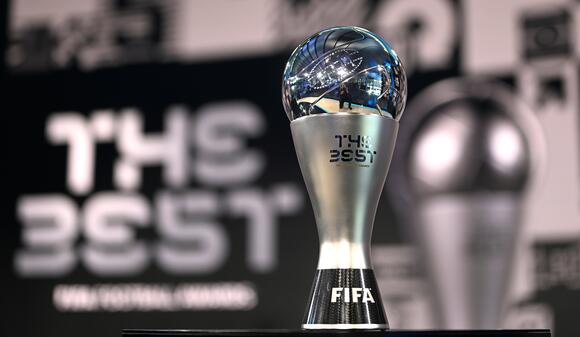 Follow live updates from the Fifa Best Awards as the as the men’s and women’s player of the year are crowned in Zurich. Lionel Messi , Mohamed Salah and Robert Lewandowski are up for the men’s award, which is being handed out one month on from the Ballon d’Or. Messi was the winner on that occasion, beating Lewandowski to the prize , after a 2021 which saw the Argentina star claim a first major international honour with his country at the Copa America. He also won the Copa del Rey and finished as La Liga’s top scorer with Barcelona on his last season at the club, before moving to Paris Saint-Germain last summer.

Lewandowski will be hoping for a different result this time around. The Bayern Munich striker is looking to defend his Fifa Best title from last year and finish ahead of Messi once more, after many felt he should have won the Ballon d’Or following a record-breaking goalscoring season in the Bundesliga. Liverpool forward Salah is the Premier League’s top scorer with 16 goals so far this campaign and has been included in the top three despite finishing seventh in last month’s Ballon d’Or.

Alexia Putellas is the favourite to win the women’s award and add to her own Ballon d’Or win after her role in Barcelona’s dominant treble winning season. She is joined by teammate Jennifer Hermoso and Chelsea striker Sam Kerr on the final shortlist. Pep Guardiola, Thomas Tuchel and Emma Hayes are among the managers nominated for men’s and women’s coach of the year, while the Puskas Award for goal of the year and the Fifa Fifpro men’s and women’s world XI will also be revealed. Follow for live updates and results from the ceremony:

Coverage: Follow text updates on the BBC Sport website and the BBC Sport app from 17:30 BST. Holders Barcelona take on record seven-time winners Lyon in the Women's Champions League final on Saturday - with two of the game's star names set to go head-to-head in Turin. The inaugural winner...
SOCCER・1 DAY AGO
Absolute Chelsea

One of Hakim Ziyech, Christian Pulisic, Callum Hudson-Odoi or Timo Werner will have to depart Chelsea in the summer if Thomas Tuchel is to bring in attacking reinforcements, according to reports.
PREMIER LEAGUE・2 DAYS AGO
Futbol on FanNation

He's not alone in failing to score past the RoboKeeper...
SOCCER・1 DAY AGO
Futbol on FanNation

The financial package on offer in Paris is said to be more lucrative than his potential earnings in Turin, but his status within the team would likely be higher at Juve.
PREMIER LEAGUE・2 DAYS AGO

Chelsea have registered an interest in signing AC Milan defender Alessio Romagnoli during the summer transfer window, according to reports. Thomas Tuchel is looking to fill the void left by Antonio Rudiger and Andreas Christensen - who are both leaving Stamford Bridge on a free transfer to Real Madrid and Barcelona respectively.
PREMIER LEAGUE・1 DAY AGO
BBC

Manager Jurgen Klopp has confirmed that "Liverpool legend" Divock Origi will leave the club in the summer. The 27-year-old Belgium striker is out of contract at the end of the season, having not played enough games this term to trigger a one-year extension to the deal. Origi, who has been...
PREMIER LEAGUE・8 HOURS AGO
LFCTransferRoom

Liverpool manager Jurgen Klopp 'sees no reason' to contact Aston Villa boss and Reds legend Steven Gerrard ahead of the Villains match against Manchester City, as per This Is Anfield.
PREMIER LEAGUE・2 DAYS AGO
FOX Sports

Entwined in the roller coaster of emotions on what could be a dramatic final day in the Premier League will be a slew of farewells for players, managers and even referees. Some will be heartfelt. Others most certainly won’t be. Divock Origi and Antonio Rudiger, for example, are leaving...
PREMIER LEAGUE・11 HOURS AGO

Jamie Redknapp has emphasised the importance of centre-back Virgil van Dijk to Liverpool, after the Reds victory over Southampton on Tuesday.
PREMIER LEAGUE・2 DAYS AGO
Daily Mail

Francesco Totti reveals he will meet Paulo Dybala on Monday and try to convince him to join Roma, as 'charm offensive' continues to lure star forward on a free transfer from Juventus

Roma icon Francesco Totti has revealed plans to try and persuade Paulo Dybala to join the club at the end of the season. Both Totti and Dybala will be in Milan on Monday for a charity match hosted by Samuel Eto'o at the San Siro. Totti has opened up to...
PREMIER LEAGUE・9 HOURS AGO
LFCTransferRoom

According to sources out of Portugal, Liverpool have opened talks to sign FC Porto star Otavio. The Reds previously bid for the Portuguese international last summer.
PREMIER LEAGUE・1 DAY AGO
United Transfer Room

According to reports, the three starter players in the Red Devils were called up by the Portuguese National team to face a set of international fixtures in June.
UEFA・7 HOURS AGO

Chelsea face Leicester City in the penultimate match of the Premier League season on Thursday night.
PREMIER LEAGUE・2 DAYS AGO
The Associated Press

A look at what’s happening in European soccer on Friday:. Real Madrid is expected to get some of its regular starters back on the field in its final Spanish league match before the Champions League final against Liverpool. Madrid visits Real Betis, which is fighting to secure fifth place. Madrid clinched the league title in advance and coach Carlo Ancelotti has been rotating his squad recently. It will face Liverpool in Paris on May 28. Mid-table Rayo Vallecano hosts already relegated Levante in the other match on Friday.
UEFA・1 DAY AGO
Sports Illustrated

GK Slonina Picks USMNT Over Poland for His International Future

The 18-year-old Chicago Fire rising star was courted by Poland but will remain with the U.S. for his international career.
4 HOURS AGO
Futbol on FanNation

Former Aston Villa player Gabby Agbonlahor has been speaking in a recent interview about what business Liverpool should be looking to do in the upcoming transfer window.
PREMIER LEAGUE・15 HOURS AGO
The Independent

Liverpool manager Jurgen Klopp insists his side will not stop in their pursuit of Manchester City and trophies whatever the outcome of the title race this weekend.The Reds face Wolves at the weekend needing to better City’s result against Aston Villa, managed by former Liverpool captain Steven Gerrard, to claim a record-equalling 20th championship and a domestic treble.They also have a Champions League final reunion with Real Madrid in Paris on May 28 but even if they miss out on one or both Klopp said his side would not go away next season.“Whatever happens on Sunday we will not stop....
PREMIER LEAGUE・2 HOURS AGO
BBC

Guinea have included former France youth international Mouctar Diakhaby in their 23-man squad for next month's 2023 Africa Cup Nations qualifiers against Egypt and Malawi. The 25-year-old defender, who plays in Spain, represented France from under-19 to under-21 level before switching allegiances to the country of his parents in March.
FIFA・2 DAYS AGO