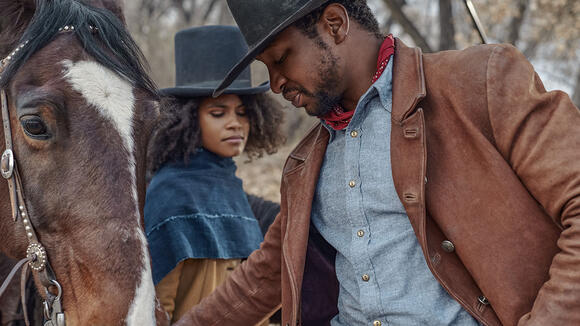 Netflix’s The Harder They Fall and Warner Bros. King Richard each won a leading four awards from the African American Film Critics Association, it was announced Monday.

Winners are set to be celebrated at an in-person event on March 2 at Los Angeles’ SLS Hotel, with a limited capacity audience and other health and safety protocols.

“It’s been a fantastic year for film,” said AAFCA president and co-founder Gil Robertson. “Just having passed the two-year mark of a global pandemic, great entertainment means more to all of us than ever before. This year’s AAFCA winners not only entertained us, but educated and inspired us and we’re looking forward to celebrating them at the AAFCA Awards.”

A complete list of this year’s winners, voted on by the group’s more than 90 members, follows.

Maya Hawke is set to appear onscreen alongside her mother, Uma Thurman, for the very first time, The Hollywood Reporter can reveal. Hawke has been cast in Yale Entertainment’s dark comedic thriller The Kill Room, also starring Samuel L. Jackson and Joe Manganiello. The Stranger Things and Once Upon a Time in Hollywood star has been added to the cast alongside other newly unveiled names, including Debi Mazar (Goodfellas, Little Man Tate, Entourage) and Larry Pine (Succession, The Royal Tenenbaums, Moonrise Kingdom).More from The Hollywood ReporterTom Cruise and 'Top Gun: Maverick' Touch Down in Cannes With Fighter Jets, Surprise Palme d'OrHow...
LOS ANGELES, CA・2 DAYS AGO
The Hollywood Reporter

In this first-look image at the action thriller Fear the Night, Maggie Q is on the lookout. Neil LaBute is directing the project, which is currently in production in Los Angeles. It follows Q as Tess, an Iraq war veteran.More from The Hollywood ReporterCannes: Lukas Moodysson to Direct 'Together 99,' Sequel to 2000 Crossover DramedyZurich Film Festival Launches Training ProgramCannes: Lukas Dhont on the Pressures of Making a Second Film and Why His Competition Title 'Close' Explores Friendship The story takes place as Tess prepares for her sister’s bachelorette party. “As the festivities unfold, the party is abruptly interrupted by a group...
LOS ANGELES, CA・23 HOURS AGO
The Hollywood Reporter

Applications are open for the second edition of Women Write Now, the screenwriting fellowship from Kevin Hart’s production company and Sundance Institute for Black women comedy scribes. Three fellows will be selected to develop their original comedy short film scripts with the opportunity premiere them at a private screening at the Sundance Film Festival next year, after which they will be released on HartBeat’s digital brand, LOL Network. The fellows will subsequently be signed to a 12-month first-look deal for projects to be produced by HartBeat and released on LOL Network, as well as the chance to pitch one separate project...
MOVIES・1 DAY AGO
The Hollywood Reporter

Universal Pictures has set a summer 2023 wide release for DreamWorks Pictures’ The Last Voyage of the Demeter. The studio has shifted the release date for the adaptation of Bram Stoker’s classic novel Dracula from Jan. 27, 2023 to August 11, 2023. The Last Voyage of the Demeter centers on the merchant ship Demeter, chartered to carry fifty unmarked wooden crates from Carpathia to London, only for its doomed crew to endure strange events. Stalked each night by a merciless presence on board the ship, the Demeter eventually arrives off the shores of England as a charred, derelict wreck, with no trace of...
MOVIES・7 HOURS AGO

Robin Roberts got emotional as she opened up about her relationship with partner Amber Laign, especially in the midst of a challenging health battle. The Good Morning America star made an appearance on The Ellen DeGeneres Show to promote her new book, Brighter By the Day. VIDEO: Robin Roberts enjoys...
CELEBRITIES・25 DAYS AGO
ComicBook

Netflix has canceled another one of its major shows, with this one getting the ax after only two seasons. Variety reports that hit sci-fi drama Raising Dion has been dropped by the streamer, following its recent season debut. The news seems to have been revealed by series star Sammi Haney, who shared the news with fans on Instagram. "Sad to say that Raising Dion is CANCELED [sic] Thank you for all of the amazing support we got from all of our wonderful fans!" Haney wrote, in part. "Season 2 was a success, equal to Season 1, even if just looking at how many people watched all of it and wanted a season 3!"
TV SERIES・24 DAYS AGO
The Hollywood Reporter

Geroge Wendt, who played Norm on the classic TV show Cheers, decided to be like Jack when he was in public. We mean Jack Nicholson here. The famed movie actor seemingly did not mind being noticed when out among the non-Hollywood crowd. Nicholson’s attitude about this did ring a bell for Wendt during his show’s incredible run on NBC and in reruns today.
CELEBRITIES・24 DAYS AGO
The Hollywood Reporter

Rihanna is a mom! On May 13, the superstar gave birth to her first child, a boy, with partner A$AP Rocky. The news wasn’t made public until May 19, when TMZ broke the news, which was later confirmed by People. The superstar first announced her pregnancy at the end of January, after she and the “Fashion Killa” rapper were spotted hand in hand on a casual, snowy stroll in New York City. Since then, RiRi has spent the past several months elevating maternity style by turning out ensemble after ensemble of runway ready looks at Milan Fashion Week, Paris Fashion Week and beyond.More from The Hollywood Reporter'Fast X': Scott Eastwood Returns...
CELEBRITIES・1 DAY AGO
The Hollywood Reporter

The Wonder Twins have been deactivated. The DC-based feature project, which was to have begun production in early July, has been shelved, according to multiple sources.More from The Hollywood ReporterFrank Grillo Horror-Thriller 'Merciless' Among New Additions to Sentient's Cannes SlateChina Eyes "Restart" of International Cooperation Post-PandemicBuenos Aires Launches International Film Production Rebate The project was being developed as a feature for HBO Max and had Riverdale star KJ Apa and 1883 actress Isabel May on board to star. Adam Sztykiel, who worked on the script for Dwayne Johnson’s upcoming Black Adam, wrote the Wonder Twins script and was due to direct. Sources say...
MOVIES・2 DAYS AGO
The Hollywood Reporter

Call it Stan Lee: Homecoming. In a unique deal, Stan Lee, the beloved co-creator of Spider-Man, Avengers and Hulk who died in 2018, is returning to Marvel Studios.More from The Hollywood Reporter'Spider-Man' Director Jon Watts to Helm Coming-of-Age 'Star Wars' Disney+ SeriesAbandoned 'Fantastic Four' Film Star Alex Hyde-White Talks Cherished Legacy and New "Force to Be Reckoned With" Reed Richards ActorFantastic Four: A Complicated Cinematic Flashback -- And Why Fans Are Elated for Group's Future Following 'Doctor Strange 2' Marvel has signed a 20-year deal with Stan Lee Universe, a venture between Genius Brands International and POW! Entertainment, to license the name...
ECONOMY・2 DAYS AGO

Universal is taking a triple shot of Jason Momoa. The studio has picked up Shots! Shots! Shots!, an action-comedy from scribes Matt Mider and Kevin Burrows that has Momoa attached to star.More from The Hollywood ReporterJason Momoa Apologizes After Posting Photos at Sistine Chapel During Break From 'Fast X' ShootJason Momoa to Star in 'Minecraft' Movie for Warner Bros.Oscars: Jason Momoa, Serena and Venus Williams Added to Presenter Lineup Momoa will also produce the feature project with partner Jeff Fierson along with Dan Lin and Jonathan Eirich of Rideback, the banner behind the billion-dollar-grossing live-action Aladdin and Oscar-nominated drama The Two Popes. The story...
MOVIES・1 DAY AGO
The Hollywood Reporter

Johnny Depp’s former agent recounted on Thursday the destruction of the actor’s career and reputation stemming from his issues with alcohol and drugs. United Talent Agency’s Tracey Jacobs told jurors in Depp’s ongoing defamation trial against ex-wife Amber Heard that the actor went from “the biggest star in the world” to a liability that studios were wary of due to his “unprofessional behavior.”More from The Hollywood ReporterAmber Heard Says 'Aquaman 2' Role Reduced Due to Depp AllegationsAmber Heard Cross-Examination Begins, Confronted With Recordings and Photos at Defamation TrialAmber Heard Details Sexual Abuse Claims Against Johnny Depp to Jury Depp had become notorious...
CELEBRITIES・1 DAY AGO
The Hollywood Reporter

From intern to partner in a dozen years. Artists First has promoted manager Maggie Haskins to partner, The Hollywood Reporter has learned.More from The Hollywood ReporterVangelis, Oscar-Winning Composer on 'Chariots of Fire,' Dies at 79'Star Trek: Strange New Worlds' Star Ethan Peck Discusses Initial "Nearly Unbearable" Weight of Playing Spock and Profound Fan Appreciation'Barry' Grabs Season 4 Renewal at HBO Since joining the company as an intern more than 12 years ago, Haskins has built a reputation for representing women both in front of and behind the camera, including writer-producer Jen D’Angelo (Hocus Pocus 2), executive producer-director Stephanie Laing (Apple TV+’s Physical),...
LOS ANGELES, CA・1 DAY AGO
The Hollywood Reporter

As media industry watchers debate the impact of a possible recession, top cable TV execs discussed whether they see boom or gloom ahead during appearances at an investors conference on Wednesday. Dave Watson, president and CEO of Comcast Cable, argued small and medium sized businesses have bounced back from the COVID-19 crisis, only to face inflationary pressures as another economic downturn looms.More from The Hollywood ReporterComcast and Charter Reveal Top Exec For Their Big Nationwide Streaming BetSky CEO Sees Opportunity in "iPhone Model," Touts Growth in Original Content SpendingA "Roku Killer" or Something Less Ambitious? Behind Comcast and Charter's Streaming Bet “What...
MARKETS・2 DAYS AGO
The Hollywood Reporter

The Cannes Film Festival literally kicked into overdrive (overflight?) on Wednesday as Tom Cruise and his Top Gun: Maverick team touched down on the Palais for a high-octane premiere that included eight fighter jets zooming above the event, expelling smoke in red and blue to match the colors of the French flag. The actor was already destined to be the biggest draw of Cannes 2022 long before he hit the Croisette, where Top Gun: Maverick is getting splashy promotion by Paramount ahead of its global rollout on May 25. But even by the festival’s own standards, Cruise received the sort of rapturous...
MOVIES・2 DAYS AGO
The Hollywood Reporter

Fox Is Happy to Stay Out of the Streaming Wars “Bloodbath,” Says CEO Lachlan Murdoch

Fox is more than happy to be outside of the streaming wars and focused instead on its advertising-based video-on-demand platform and its live offerings.  “We’ve been very happily on the sidelines watching this sort of bloodbath, which is going on in the SVOD market,” Fox CEO Lachlan Murdoch said Wednesday. “And what that’s meant is we haven’t had to spend billions of dollars propping up an SVOD service, but we also haven’t felt the need to artificially put sports into an SVOD service to keep subscription levels up.”More from The Hollywood Reporter'911,' 'The Resident' Close Renewal Deals at Fox'911,' 'The Resident'...
BUSINESS・2 DAYS AGO