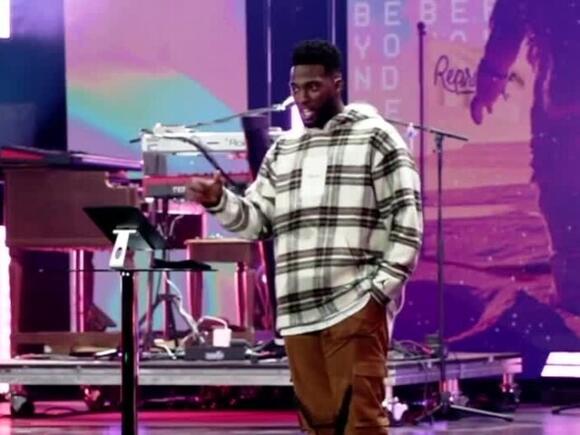 A Tulsa area church leader faced criticism on social media Sunday after a video of the pastor smearing his spit on a man's face during a sermon over the weekend started going viral.

Pastor Michael Todd of Transformation Church in Bixby gave a Sunday sermon about how "receiving God's vision can be nasty." The video shows Todd and a man standing on stage while Todd discusses trusting God and his vision, even when it's not the most pleasant. He then spit in his hand before rubbing it on the man's face. The moment caught many off-guard and gasps can be heard from those who attended the church service in person.

Videos from the sermon garnered thousands of comments and views all over social media. Many criticized the move due to the ongoing pandemic and recent omicron surge across the nation. Todd responded to the commentary in a video posted to social media on Monday.

People can watch the full sermon on the church's YouTube page .

Stay in touch with us anytime, anywhere --

2 News Meteorologist Brandon Wholey surprised a group of Tulsa kindergartners on Wednesday after he heard one of them loved weather and enjoyed watching his forecasts.
TULSA, OK・2 DAYS AGO
2 News Oklahoma KJRH Tulsa

A man is dead after getting hit by a car in an east Tulsa parking lot on Friday morning.
TULSA, OK・1 DAY AGO
CNN

During the initial investigation, police found multiple vehicles that had damage from the shots fired as well as two rounds into the front of a residence.
TULSA, OK・5 HOURS AGO
2 News Oklahoma KJRH Tulsa

A jury found a Tulsa man guilty on all counts in a murder trial. They convicted Keenan Burkhalter on three counts of first degree murder and one count of arson. Bu rkhalter shot three people: Hosea Fletcher, Ramon Marquis Brown and seven-year old Maziah Brown and then set fire to the house with them inside. The medical examiner later determined Ramon Brown and Maziah Brown had smoke in their lungs, meaning the gunshots did not kill them before the fire started.
TULSA, OK・1 DAY AGO
2 News Oklahoma KJRH Tulsa

David Ware is set to appear in court again after an automatic appeal was officially filed on Thursday.
TULSA, OK・1 DAY AGO

An Amber Alert has been canceled for three missing kids from Pittsburg County on Friday morning. 10-month-old Zamirah Aranda, 8-year-old Raziel Aranda, and 10-year-old Areli Aranda have been found safe and accounted for. They were last seen at 7:30 a.m. on Friday in McAlester near Daisy Road.
PITTSBURG COUNTY, OK・1 DAY AGO
2 News Oklahoma KJRH Tulsa

Tulsa police officers bound for trial on cover up accusations

Lt. Marcus Harper and Officer Ananias Carson are both accused of helping cover up a shooting that happened in August 2020.
TULSA, OK・4 DAYS AGO
2 News Oklahoma KJRH Tulsa

A group of recent high school graduates left for the trip of their dreams early Wednesday morning, but they never made it, after what their airline calls a fraudulent purchase.
SPRINGFIELD, MO・2 DAYS AGO

Decades before Woods became one of the most popular Black athletes in history, a man from Tulsa helped make it all possible.
TULSA, OK・1 DAY AGO
2 News Oklahoma KJRH Tulsa

An early morning police pursuit ended with a stolen truck with a trailer crashing in Jenks on Wednesday,. Sapulpa police responded to calls regarding reports of a stolen trailer early Wednesday morning. During their investigation, they spotted a truck with the stolen trailer.
JENKS, OK・3 DAYS AGO
2 News Oklahoma KJRH Tulsa

Officials from the Muscogee Nation Gaming Enterprises announce the Muskogee casino location is reopening on Friday. The casino was closed two weeks ago due to major flooding caused by the May 4 storms. It impacted most of Green Country, including Okmulgee County.
MUSKOGEE, OK・2 DAYS AGO
2 News Oklahoma KJRH Tulsa

All tickets that were purchased for tonight's match will still be valid for the make-up date.
TULSA, OK・5 HOURS AGO

Tulsa is one of four communities selected to participate in the Just Home Project.
TULSA, OK・3 DAYS AGO
2 News Oklahoma KJRH Tulsa

TPD: Man accused of beating his dog with a wooden mallet arrested

Tulsa police say they arrested a man who's accused of hitting his own dog with a wooden mallet. Officers say they received a call around 5 p.m. on Thursday from a resident who said they saw their neighbor, Alberto Esparza, beating his dog with a large wooden mallet.
TULSA, OK・9 DAYS AGO