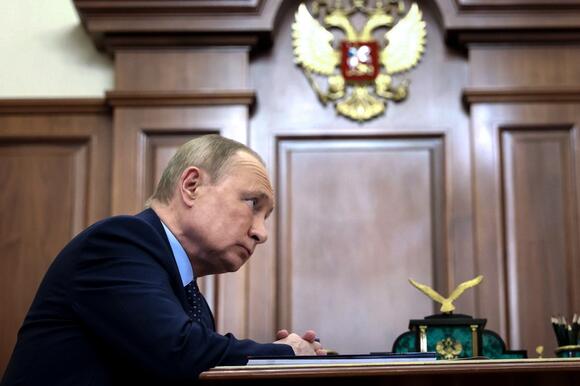 MOSCOW (AP) — Russia’s top diplomat angrily rejected the U.S. allegations that it was preparing a pretext to invade Ukraine as Russian troops that are amassed near the Ukraine border launched more drills Monday.

The White House said Friday that U.S. intelligence officials had concluded that Russia had already deployed operatives to rebel-controlled eastern Ukraine to carry out acts of sabotage there and blame them on Ukraine in a “false-flag operation” to create a pretext for possible invasion.

He reaffirmed that Russia expects a written response this week from the U.S. and its allies to Moscow’s request for binding guarantees that NATO will not embrace Ukraine or any other ex-Soviet nations, or station its forces and weapons there.

Washington and its allies firmly rejected Moscow’s demands during last week’s Russia-U.S. negotiations in Geneva and a related NATO-Russia meeting in Brussels, which were held as an estimated 100,000 Russian troops with tanks and other heavy weapons are massed near Ukraine in what the West fears might be a prelude to an invasion.

Amid the troops buildup, Russia in recent weeks has held a series of war games in regions that border Ukraine. On Monday, the military announced the launch of another exercise involving armored units stationed in the western part of Russia that includes 300 combat vehicles.

A delegation of U.S. senators is visiting Ukraine to emphasize U.S. support for the country.

“Our bipartisan congressional delegation sends a clear message to the global community: the United States stands in unwavering support of our Ukrainian partners to defend their sovereignty and in the face of persistent Russian aggression,” Sen. Jeanne Shaheen, a New Hampshire Democrat, said in a statement.

Speaking Monday on a visit to Kyiv, German Foreign Minister Annalena Baerbock warned that “any further escalation would carry a high price for the Russian regime — economic, political and strategic” — and emphasized the need to continue negotiations.

“We are prepared to have a serious dialogue with Russia, because diplomacy is the only way to defuse this highly dangerous situation,” she said.

Baerbock said Germany has offered to send cybersecurity specialists to Ukraine to help investigate last week’s cyberattacks , which Ukrainian authorities have blamed on Russia. At the same time, she noted that Germany hasn’t changed its refusal to provide it with weapons.

“We made clear that we will do everything to avoid escalating the crisis,” she said.

Ukrainian officials have warned that Russia could launch an attack from various directions, including from the territory of its ally Belarus.

Belarusian President Alexander Lukashenko, who has increasingly relied on the Kremlin’s support amid Western sanctions over a brutal crackdown on domestic protests, said Russia and Belarus will hold massive military drills next month.

Lukashenko said the maneuvers will be conducted on Belarus’ western border and also in the country’s south, where it borders Ukraine. Belarus Security Council Secretary Alexander Volfovich said Monday that Russian troops already had started arriving in the country for the exercise, according to the BELTA news agency.

Russia has denied having plans to attack its neighbor and in turn accused the Ukrainian leadership of hatching plans to use force to reclaim control of Russian-backed rebel-held territories in eastern Ukraine. Ukrainian authorities have denied it.

Russia annexed the Crimean Peninsula from Ukraine in 2014 after the ouster of Ukraine’s Moscow-friendly leader and also threw its weight behind a separatist insurgency in eastern Ukraine. More than 14,000 people have been killed in nearly eight years of fighting there.

Russian President Vladimir Putin has warned that Moscow will take unspecified “military-technical measures” if the West stonewalls its demands.

Deputy Foreign Minister Sergei Ryabkov, who led the Russian delegation at the talks with the U.S. in Geneva, said last week that he would “neither confirm nor exclude” the possibility of Russia sending military assets to Cuba and Venezuela if the U.S. and its allies don’t curtail their military activities on Russia’s doorstep. U.S. national security adviser Jake Sullivan has dismissed the comments as bluster.

Asked Monday about the possibility of Russian missile deployment to Cuba and Venezuela, Kremlin spokesman Dmitry Peskov told reporters that “Russia is thinking about how to ensure its security in the context of the current situation.”

WHEATON, Ill. — A suburban tow truck driver was found guilty of first-degree murder Wednesday following a road rage shooting in 2017. Anthony Tillmon, 39, formerly of Lansing, faces 45 to life following the April, 21, 2017 shooting near the I-294 interchange in Oak Brook. Tillmon and the victim, Eduardo Munoz, 43, of Florida, were […]
OAK BROOK, IL・2 DAYS AGO
WGN News

4 charged in carjacking, deadly shooting that injured 2 cops on South Side

CHICAGO — Two men and two teenagers were charged in connection with a deadly shooting and carjacking that injured two police officers on the South Side. Antonio Gonzalez,19, and Isaac Corona, 25, along with two juveniles, 17 and 16, have been charged in a series of crimes that happened Monday afternoon. Police said it started […]
CHICAGO, IL・2 DAYS AGO
WGN News

The suspect is due in court on July 13.
OAK BROOK, IL・2 DAYS AGO
Newsweek

Vladimir Putin is so popular in Russia that he has the “political space” to withdraw his forces from Ukraine, said Boris Johnson.The prime minister said the Russian president still has “massive backing” from his own people despite international outrage over the invasion.“The Russian public overwhelming back Putin,” Mr Johnson told Talk TV. “Therefore he has the political margin for manoeuvre from within Russia … Putin has far more political space to back down, to withdraw.”The PM added: “There could come a point when he could say to the Russian people, ‘The military-technical operation that we launched in Ukraine has...
POLITICS・24 DAYS AGO
Salon

Rep. Marjorie Taylor Greene (R-GA) speaks to supporters of former U.S. President Donald Trump at the Banks County Dragway on March 26, 2022 in Commerce, Georgia. This event is a part of Trump's Save America Tour around the United States. (Megan Varner/Getty Images) On Monday, CNN's Andrew Kaczynski and Em...
COMMERCE, GA・24 DAYS AGO
Newsweek

Ukrainian soldier Cpl. Andrii Shadrin said his own parents' media diet in Crimea leaves them convinced that he is fighting on behalf of Nazis.
POLITICS・1 DAY AGO

Putin is no longer interested in negotiating with Ukraine and just wants to seize as much territory as possible instead, report says

Vladimir Putin initially believed in a peace deal with Ukraine but has since changed his mind, people close to him told the Financial Times.
POLITICS・26 DAYS AGO
americanmilitarynews.com

The intelligence the U.S. shared with Ukraine helped it continue to resist Russian invading forces and even shoot down a transport plane carrying hundreds of Russian troops, a new report revealed. According to current and former U.S. officials who spoke with NBC News on Tuesday, the U.S. provided critical intelligence...
MILITARY・24 DAYS AGO
Newsweek

Vladimir Putin’s girlfriend, Alina Kabaeva, has made a rare appearance for her annual 'Alina Festival' on Saturday at Moscow’s VTB Arena, putting rumours that she was hiding in a Swiss chalet or a Siberian bunker to rest. A rhythmic gymnastics festival. Her presence at the patriotic rhythmic gymnastics...
EUROPE・25 DAYS AGO

Rinat Akhmetov, owner of the Azovstal plant, is awaiting delivery of a 475-foot superyacht code-named Luminance, according to The New York Times.
BOATS & WATERCRAFTS・1 DAY AGO
Business Insider

Sign up for the Fortune Features email list so you don’t miss our biggest features, exclusive interviews, and investigations. Two Russian oligarchs found dead alongside their families within 48 hours of each other are the latest high-profile executives to die in mysterious circumstances since the beginning of the year.
PUBLIC SAFETY・26 DAYS AGO
Business Insider

Approximately 15,000 Russian troops died in the invasion of Ukraine, per UK's Defense secretary.
MILITARY・25 DAYS AGO

"No one wants to see the outbreak of a third world war," Chinese Foreign Ministry spokesman Wang Wenbin told reporters during a briefing.
CHINA・24 DAYS AGO
Salon

Fox News host Lisa Kennedy said on Monday that U.S. lawmakers "should not have the government involved in education at all," suggesting that America should rid itself of the public school system entirely. Kennedy's remarks came during Monday's segment of "Outnumbered" in which Kennedy was facilitating a discussion around the...
CONGRESS & COURTS・24 DAYS AGO
Business Insider

The former F-35 test pilot Billie Flynn told The Aviationist that moving to the "cosmic spaceship" that is the F-35 was too much to ask of MiG pilots.
AEROSPACE & DEFENSE・25 DAYS AGO
Business Insider