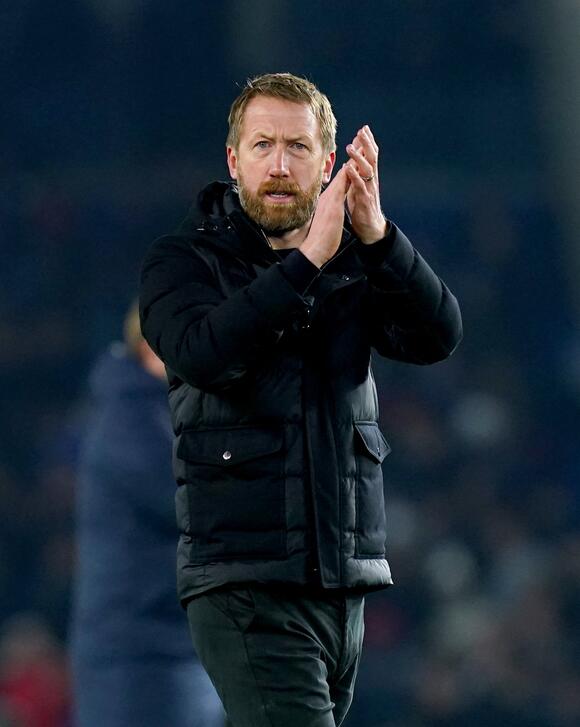 Brighton boss Graham Potter insists he is very happy at one of the Premier League’s “best-run clubs” amid reports linking him with the vacant Everton job.

The Toffees are searching for a new manager after sacking Rafael Benitez following just one win from 13 top-flight games.

Potter, whose contract runs until the summer of 2025, has impressed since arriving at the Amex Stadium in 2019 and has the Seagulls flying high in ninth place ahead of Tuesday’s visit of Chelsea.

“I can’t comment on speculation, things that are out there in the newspapers,” he said.

“I’m focused on my job here, very happy here at, in my opinion, one of the best-run football clubs in the Premier League, with a fantastic owner, chairman, CEO, sports director.

“(There are) great people at the club, a nice environment to work in, an ambitious club, so I just get on with my job here and do my best.”

Former Ostersunds and Swansea boss Potter has been connected to a number of other clubs during his time on the south coast, including Tottenham and Newcastle

The 46-year-old also came under pressure in the job last season after Brighton failed to win any of their opening 10 top-flight home matches.

While many within the game regard him as one of most talented English managers, Potter believes his growing reputation is down to a collective effort.

Asked if he was flattered by the rumoured interest, Potter replied: “No, not really.

“It’s just the speculation or people want to write something.

“The reality is I’m at a really good football club that helped me. I’m not here because I’m that good, it’s because I’m at a good club and I have good support.

“I have people that allow me to do my job, that give me support, give me trust and these things are important, there’s an organisation around the club.

“You just can’t help what people write or put out there.”

Thomas Frank is hopeful Christian Eriksen will agree to extend his stay at Brentford.The former Tottenham playmaker has been impressive since joining the Bees on a short-term deal in January.Eriksen had been looking for a club to restart his career after suffering a cardiac arrest while representing Denmark at Euro 2020.The 30-year-old’s form since means he is unlikely to be short of potential suitors but, after securing Brentford’s place in the Premier League for another year, manager Frank feels optimistic.The Dane said at a press conference: “I would love to say 100 per cent, but I am convinced there is...
PREMIER LEAGUE・3 HOURS AGO
The Independent

Gareth Bale has been declared fit to lead Wales’ bid to reach a first World Cup for 64 years.Wales boss Robert Page has named skipper Bale in a 27-man squad for the World Cup play-off final against Scotland or Ukraine in Cardiff on June 5.The Dragons also face four Nations League ties in June, with home and away games against Holland as well as a trip to Poland and a visit from Belgium.🏴󠁧󠁢󠁷󠁬󠁳󠁿 CARFAN CYMRU 🏴󠁧󠁢󠁷󠁬󠁳󠁿Five matches. One @FIFAWorldCup play-off final. 🎟 https://t.co/hsH0UFCPVt #TogetherStronger pic.twitter.com/kAGuWLSiUV— Wales 🏴󠁧󠁢󠁷󠁬󠁳󠁿 (@Cymru) May 19, 2022Bale has made just two cameo substitute appearances for Real...
SPORTS・4 HOURS AGO
The Independent

The EFL play-offs were marred by further crowd misbehaviour on Wednesday night as a pitch invader barged into Mansfield player Jordan Bowery during the League Two semi-final second leg at Northampton.The man made his way onto the pitch towards the end of the match, which Mansfield won 1-0 to complete a 3-1 aggregate victory.The individual was seen to barge into Bowery, who stayed on his feet, before Northampton players and stewards intervened and led the pitch invader off.A flare was also thrown onto the pitch at the same point in the match as the pitch invasion.No arrests have been made...
SPORTS・3 HOURS AGO
The Independent

New England captain Ben Stokes will lead his side out against New Zealand at Lord’s next month without a host of fast bowling options available to him.Here, PA news agency looks at the fitness issues affecting England’s pace attack.Jofra ArcherWe're all with you and we're all gutted for you, @JofraArcher 😔— England Cricket (@englandcricket) May 19, 2022A longstanding elbow problem means Archer has not played for England since March 2021 but the 27-year-old was eyeing a T20 comeback this summer, with a view to kickstarting his international career. Those hopes were scuppered by the news that he has suffered a...
SPORTS・3 HOURS AGO