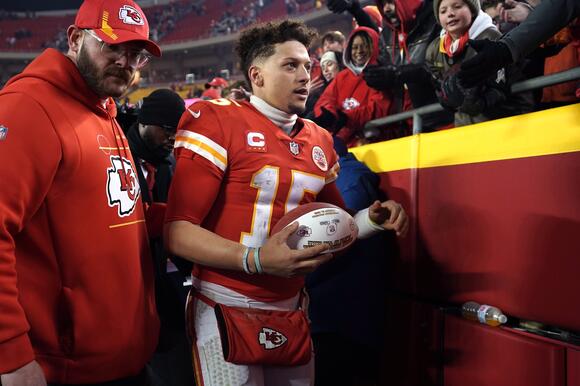 Patrick Mahomes may have vastly outperformed Ben Roethlisberger Sunday in the Chiefs’ playoff blowout win over the Steelers. But in the end, great recognizes great.

The two quarterbacks shared a moment following the contest, with Mahomes sending off Roethlisberger with some parting words, and a jersey exchange request. While Mahomes has dominated the NFL for the last four seasons, Roethlisberger is one of the best ever. Big Ben finishes his career with two Super Bowl wins, six Pro Bowl nods, and multiple places atop the NFL’s all-time passing lists. He’s fifth in passing yards, eighth in passing touchdowns and fifth in wins, respectively.

Mahomes said he told Roethlisberger how much he admires his game.

“I just told him I have so much respect for him,” Mahomes said. “I’ve watched him growing, and the way he plays the game, he competes to the very end. And he did that this whole entire season.”

There wasn’t a lot of Big Ben magic this season, though there were moments. His spirited comeback attempt against the Chargers, and game-winning drives against the Ravens come to mind.

Even in a diminished state, Roethlisberger was dangerous at the end of the game, just like always. That’s how he’ll be remembered.

Mahomes said he would like the jersey off Ben’s back, but recognized that might take a little bit.

“I’m gonna get one of these at some point,” Mahomes said.

Until then, sharing the field with Roethlisberger on his special night will have to suffice.

Thats nothing new alot of the guys trade jerseys some right on the field...2 guys that respect each other 👍👍

i love it...still a kid in his heart...looking at his favorite quarterback retire. Leave this child along.. 😍😞😂

What I saw was respect and between the two. We need more of that.

Big Ben or Rodgers? Whose career would you want?

We’re in the period between the NFL draft and Organized Team Activities so shows like “Good Morning Football” need to come up with content constantly, even when there isn’t much going on.
NFL・16 HOURS AGO
93.7 The Fan

Jordan Addison down to USC & Texas, why NFL is to blame

The marquee name in NCAA free agency is reportedly down to two schools, a look at how the NFL is leaving colleges with problems while reaping rewards
PITTSBURGH, PA・19 HOURS AGO
93.7 The Fan

Despite size, Austin III wants to be ‘dog’ for Steelers

Calvin Austin III is used to being the smallest guy in the room. But the Steelers’ rookie wide receiver and third-round pick feels he has the mentality, and perhaps more importantly, the speed, to overcome his diminutive stature.
AUSTIN, TX・1 DAY AGO
93.7 The Fan

Big Ben having a little fun for Throwback Thursday

Whaley: Jack Ham would be a backup special teamer in today's NFL

During the latest edition of Wednesday with Whaley, former Buffalo Bills General Manager Doug Whaley said that Pro Football Hall of Famer Steelers outside linebacker “Jack Ham would be a special teams backup” in today’s NFL.
PITTSBURGH, PA・1 DAY AGO
93.7 The Fan

A monster inning in their final at bat turns a one-run deficit into a blowout win as a couple of WPIAL stars beat the Nittany Lions at PNC Park
PENN, PA・2 DAYS AGO
93.7 The Fan

Steelers to open Hall of Honor Museum at Heinz Field

The Steelers are adding a museum to Heinz Field. On Wednesday, the organization announced the addition of the Steelers Hall of Honor Museum.
PITTSBURGH, PA・1 DAY AGO
93.7 The Fan

DeMarvin Leal was a stud at Texas A&M but fell down draft boards after an All-American season. Listen to what Leal says of the fit in Pittsburgh
PITTSBURGH, PA・13 HOURS AGO