Everton and Its Identity Crisis 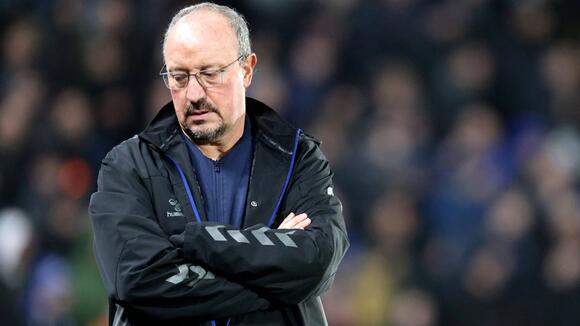 Everton spends like a top club and might think it's a top club, but it doesn't produce like one. The Rafa Benítez experience is just the latest evidence of its incoherence.

In retrospect, Rafa Benítez was probably never going to work as manager of Everton. Certainly by the end, as he was sacked on Sunday after 200 days in charge , following a run of just one win in the club’s last 13 Premier League games, there was a feeling of inevitability about his departure. When you have been a successful manager of Liverpool, when you have been so closely identified with that half of the city, when you have made comments about Everton perceived as disparaging, the window for error is extremely small.

And there was plenty of error. Everton has not been relegated in 71 years, but it stands just six points above the drop zone. It should not go down this season, but given how poorly Everton has been playing, how bad the defense has been, there were no guarantees. And this is a club with the seventh-highest wage bill in the top flight. It shouldn’t even be in the conversation about the drop.

Yet it all started so well. Everton had 14 points from seven games. It had won at Brighton and got a point at Manchester United. But then the injuries began to bite. First Dominic Calvert-Lewin and then Yerry Mina and Abdoulaye Doucouré. Calvert-Lewin and Mina are just returning, while Doucouré hasn’t been the same since his foot injury. Benítez, not entirely unreasonably, can blame the loss of the spine of his team for a general loss of form and confidence. Perhaps under another manager, one for whom fans had more sympathy, one who could have inspired with talk of a bold new project, it might have been different. But Benítez is who he is.

And that is a subtler problem of impression than simply the fact he won a Champions League with Liverpool. Benitez is a survivor from the Premier League of 15 years ago, from the era before widespread pressing and the emphasis on the front foot. He is a manager who wants to control games, whose instinct is to defend and strike on the break. There is nothing necessarily wrong with that, but he is no longer in the tactical vanguard and that means he no longer feels like a very top-level manager. To appoint Benítez is to accept you are a mid-level club—and as David Moyes has demonstrated at West Ham, if things go well, those sides can qualify for the Europa League, and even challenge for Champions League qualification.

That, though, cuts against Everton’s self-perception—and that astonishing fact about the rank of its wage bill. In the mid-1980s, Everton was twice champion. It was the power that challenged the might of Liverpool. No side has spent more seasons in the top flight than Everton. It is moving—belatedly—into a fine new stadium. It has won nine league titles, making it the fourth-most successful team in English history. Make any criticism of Everton, and those facts will be hammered back at you.

But Everton has nothing like the wealth of Manchester City, Chelsea, Manchester United or even Liverpool. It is not a super club. And yet it continues to try to act like one. A mid-table Premier League side has only one way to thrive, which is to recruit young and cheap and sell at a profit when a player reaches his late 20s. That’s not to say there aren’t older bargains to be had, but too many Everton signings have been of players already on the way down.

That is an issue of philosophy and structure, and neither Steve Walsh nor Marcel Brands has seemed comfortable in the role of sporting director. But then no manager has ever seemed entirely comfortable either. Fans never took to Ronald Koeman, Sam Allardyce, Marco Silva or Benítez. Carlo Ancelotti, with his three Champions Leagues, was afforded more patience, but after only six home wins last season, there was some grumbling against him—even if it was less obvious because of the absence of fans. And he, anyway, left as soon as Real Madrid came calling. There is talk of Roberto Martinez returning, but it was only six years ago that fans staged a sit-down protest to call for his dismissal. One former manager has acknowledged privately that the owner who has now gone through six managers in six years, Farhad Moshiri, is too responsive to public opinion and has no vision of his own.

He has spent money—a net $270 million on transfers—but he has spent it badly. Why have so many club figures left this season, from Brands to the director of medical services Danny Donachie to Lucas Digne, apparently because of differences with Benítez, only for Benítez then to be dismissed? It all speaks of chaos and a lack of coherent thinking. And the result is a club that now has no clear sense of its place in the world, that looks essentially unmanageable.

This time in the FA Cup, Jürgen Klopp’s side did just enough to prevail in penalties and preserve the wild dreams of a quadruple.
PREMIER LEAGUE・2 DAYS AGO