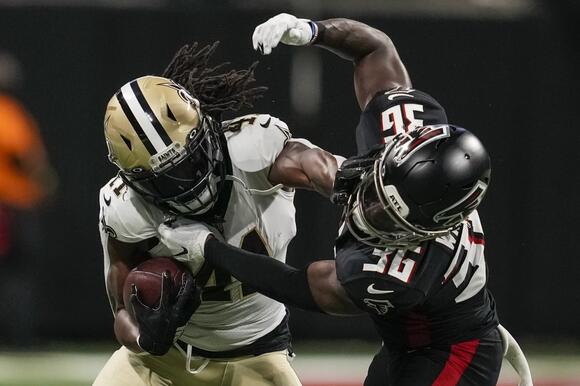 Anyone can make season predictions, but how many come back to them? We take a look back at our Saints ones made in September.

The Saints season didn't end like anyone wanted, and the way things have played out in Wild Card weekend only leaves the 'what if' and 'if only' feelings. On one hand, it's hard to celebrate a winning record for New Orleans because of missing a playoff berth. On the other hand, there is a lot of appreciation for what the team faced and overcame to be in the spot they were in the first post-Drew Brees season.

Season predictions every year are always a spectacle, and like mock drafts, it's the norm from every outlet. As long as you don't make it into the realm of Old Takes Exposed , then most things feel like a win. We revisit Saints picks made prior to the beginning of the season. How far off were we?

at Patriots, at Seahawks, at Titans, at Eagles, at Buccaneers, at Falcons

The initial feeling was very confident in the Saints this season. Originally, taking the over from Las Vegas landed with an on the record 10-7 prediction, but later bumping it to 11-6 based on what was seen in training camp and the preseason. Being a dominant home team was going to be the bread and butter for the Saints going in, but the reality is that they were anything but.

Call me an extreme optimist, but I'm not buying the fallout of the team. I will say that 11 wins seems to be the ceiling here, and that would mean they would get into the playoffs as a Wild Card. My previous on the record prediction was 10-7 . I do believe that the Bucs are the top threat to win the division, but at the same time, we saw how meaningless that becomes in the grand scheme of things.

Things started out great for the team, but quickly fell off and changed after Jameis Winston was lost for the season and getting to 5-2. Some midseason fallout was expected, but not to the tune of a five-game losing streak. The team ended up stopping the bleeding after falling to 5-7, and ended up winning four of their last five games. However, it wasn't enough to get into the playoffs.

These are always a crapshoot, but fun to do. The Saints offense ended up having their lowest point output in the Sean Payton era at 364, highlighted by amassing just 40 points in the 1st Quarter all year. 2007 was the previous low team output at 379.

Four games saw the Saints score just single digits, as they went 1-3 in those matchups. Three games saw the team allow single digits, with one coming in the form of a shutout on the road against the Bucs. Their biggest margin of victory was 35 points in the season opener, while their largest margin of loss was 25 points against the Bills on Thanksgiving.

After adding former LSU stars Tyrann Mathieu and Jarvis Landry, New Orleans could eye up another local product to strengthen their running back room.
NEW ORLEANS, LA・2 DAYS AGO
SaintsNewsNetwork

Is Odell Beckham Jr. a Need or Want for the Saints?

An under the radar offseason signing, Kentavius Street looks to become the latest free-agent steal for the Saints.
NEW ORLEANS, LA・4 HOURS AGO