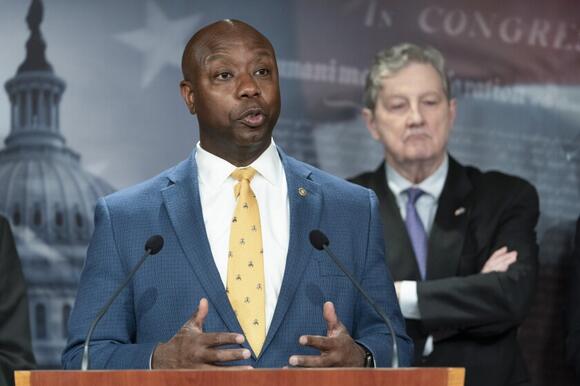 With a video series on issues he sees as pertinent to the Black community, the U.S. Senate’s only Black Republican, Tim Scott of South Carolina, is putting forth what he characterizes as a positive response to partisan rhetoric on race that he’s best-positioned to rebut.

But that approach comes with some harsh words about President Joe Biden’s recent rhetoric.

Biden's speech was met with widespread Republican criticism, with Senate Minority Leader Mitch McConnell accusing Biden of invoking “the brutal racial hatred of Jim Crow Segregation to smear states’” new voting laws. There was also some pushback from Democrats. Sen. Dick Durbin of Illinois said Biden went “a little too far in his rhetoric” but also told CNN he was “glad” Biden did so.

For Scott, the speech was an overly impassioned stretch, or worse.

“To compare or conflate people who oppose his positions as being racists and traitors to the country is not only insulting and infuriating, it’s dead wrong,” Scott told the AP last week. “All you have to do is know the facts, and you realize that the president wasn’t misleading us only, he was actually fibbing to us, in order to amass political power — basically lying to us.”

Instead, the South Carolina Republican is framing his half-dozen videos, to be released between this week and the end of February's Black History Month, as listening sessions that hit on many hard-pressed topics he knows first-hand.

Describing himself as “a guy that grew up in a single-parent household, mired in poverty, with really no prospect for something dramatically different,” Scott said that his own trajectory was turned around due to education, his supportive mother and mentorship.

“Martin Luther King Jr.'s legacy, and the celebration of his life, and the contributions of African Americans to this country, is a very important time for us to highlight the progress that we’ve made and also some of the issues that stand in the way of even more progress,” Scott said. “I decided that the best way to do that is not just to hear from me but to actually listen to other folks throughout the community.”

Scott, who has amassed a significant war chest for what he says will be his final Senate campaign , has become one of the GOP’s go-to standouts, sometimes mentioned as a potential 2024 presidential candidate.

He gave the party’s response to Biden’s maiden congressional address last year — when he suggested Democrats were wielding race as “a political weapon" — and had a prime-time speaking spot during the 2020 Republican National Convention. Along with Sen. Marco Rubio, R-Fla., and former U.N. Ambassador Nikki Haley, he advises diversity efforts for a group intent on expanding Republican power over state-level offices.

Joining Sen. Cory Booker, D-N.J., Scott led legislative efforts for a police reform bill, but negotiations ended without an agreement last year. The efforts, following protests sparked by killings of unarmed Black people by officers, garnered massive attention, but Scott — who told the AP that Congress should continue its work on police reform "and finish it" — said he is just as passionate about financial advancement in underserved or minority areas.

Also with Booker, he previously championed “opportunity zones,” set up to enable private investors to reinvest profits into designated low-income areas, allowing a tax benefit by deferring capital gains taxes from investments. The zones were included in the $1.5 trillion tax cut legislation that Trump pushed through Congress in 2017 and, according to a Government Accountability Office report, drew $29 billion to low-income areas through 2019.

Relying on the constituent concerns from his videos, Scott said he's just as intent on finding more ways to encourage lasting economic changes in underserved and minority communities as he is on potentially more attention-grabbing issues like policing.

“So often, when you read the press and you’re talking about minorities, you’re particularly talking about issues around poverty or lack of access and not really focusing on the positive side or the constructive side,” Scott said. “That needs more attention.”

Meg Kinnard can be reached at http://twitter.com/MegKinnardAP .

Well, who else is available to be used, against MLK fight for civil rights vote, by the Republican party except Uncle Scott of SC. Welldone Tim Scott.

U.S. Rep. Madison Cawthorn is facing seven challengers in North Carolina's Republican primary, an early test of whether voters will grant the pro-Donald Trump firebrand another term despite his personal and political stumbles
CONGRESS & COURTS・6 HOURS AGO
San Diego Union-Tribune

Oregon Democrat at risk as 5 states hold US House primaries

In Tuesday's primary elections, a longtime moderate Democratic congressman from Oregon faces his stiffest primary challenge yet after years of irking his colleagues
POLITICS・6 HOURS AGO
San Diego Union-Tribune

The Arizona Senate has voted to open an ethics investigation into a firebrand Republican member who tweeted inflammatory comments about last weekend's racist attack at a Buffalo, New York, supermarket
PUBLIC SAFETY・8 HOURS AGO

Federal prosecutors have recommended a prison sentence of more than two months for a Virginia man who stormed the U.S. Capitol wearing a "Camp Auschwitz" sweatshirt
PROTESTS・12 HOURS AGO
San Diego Union-Tribune

Guatemala's president has reappointed to a second term his attorney general, who the U_S_ government says is involved "in significant corruption."
POLITICS・7 HOURS AGO

Opening statements are set to be delivered in the trial of a lawyer for the Hillary Clinton presidential campaign who is accused of lying to the FBI as it investigated potential ties between Donald Trump and Russia in 2016
U.S. POLITICS・6 HOURS AGO
San Diego Union-Tribune

The Democratic primary for Oregon governor on Tuesday will serve as a test between the moderate and progressive wings of the party at a time of widespread frustration in the state over the handling of the pandemic, the homelessness crisis, a lack of affordable housing and increasing gun violence
POLITICS・5 HOURS AGO
San Diego Union-Tribune

The white gunman charged in a deadly, racist rampage inside a Buffalo supermarket didn't need to travel abroad for tactical training, nor did he need to join an organization of like-minded militants who shared his world view
PUBLIC SAFETY・7 HOURS AGO

NORRISTOWN, Pa (CBS) — It’s primary day in Pennsylvania. Polls will be open Tuesday from 7 a.m. to 8 p.m. and all eyes are on the race for U.S. Senate. The race to represent Pennsylvania in the United States Senate is heating up. Over the weekend, the Democratic frontrunner had a stroke. Meanwhile, the top Republicans made their final push ahead of Tuesday’s primary. VOTER GUIDE: Pennsylvania Primary Election 2022 This is the race to fill the seat left behind by Republican Pat Toomey, who decided not to run for reelection. John Fetterman, the Democratic frontrunner, says his recent stroke won’t slow down his...
PENNSYLVANIA STATE・46 MINUTES AGO
6abc Action News

Race for GOP Senate nomination in Pennsylvania coming down to wire

It's primary day in Pennsylvania. Polls open at 7 a.m. and close at 8 p.m.
PENNSYLVANIA STATE・33 MINUTES AGO