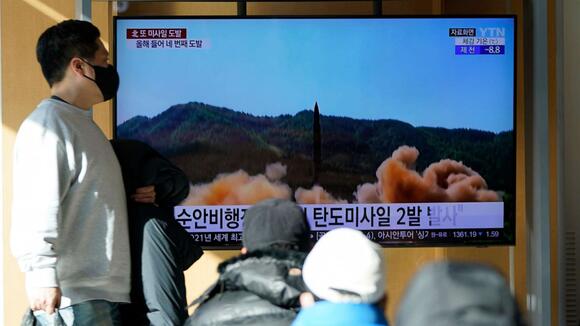 The missiles traveled about 236 miles and reached an altitude of about 26 miles, said South Korea’s military, which was analyzing details of the launch.

It was the fourth missile launch this year, following two self-claimed hypersonic missile tests on Jan. 5 and Jan. 11 and last Friday’s short-range ballistic missile that the secluded regime’s state news agency, KCNA, claimed was launched from a rail car.

“North Korea probably believes they pulled out a response from the U.S. by firing hypersonic missiles in the new year because the U.S. acted with new sanctions,” Moon Keun-sik, a military expert at the Korea Defense and Security Forum, told ABC News. “North Korea claims that ballistic missile test-launch is a part of the training, but it also acknowledges that their action is a UN violation.”

North Korea has said its weapons development is a rightful act of self-defense. The country blames the U.S. for escalated tensions.

“The DPRK's recent development of new-type weapon was just part of its efforts for modernizing its national defense capability. Nevertheless, the U.S. is intentionally escalating the situation even with the activation of independent sanctions, not content with referring the DPRK's just activity to the UN Security Council,” KCNA said on Friday, citing North Korea’s Foreign Ministry spokesperson.

“We could say that the situation has escalated as the United States took out the sanctions card in response to North Korea's recent missile test launch,” Kim Yong-hyun, professor of North Korean studies at Seoul-based Dongguk University, told ABC News. “Through missile experiments, Kim Jong Un intends to highlight North Korea’s presence while the United States is mainly taking care of Ukraine issues, and at the same time maintain solidarity among their people.”

Some experts saw the recent tests as planned drills on North Korea’s side. Kim Jong Un announced at the 8th Party Congress in January 2021 that the country planned to strengthen its weapon systems, including hypersonic missiles.

“Pyongyang’s missile tests will take rounds and rounds for the next three years, not mainly intended to send a political message, which is only part of the motivation,” Bong Young-shik of Yonsei University told ABC News. “It would be a mistaken belief to think that the North Korea military can be bought out with massive immediate concessions because North Korea is moving on its own schedule by military capability.”

Analysts in South Korea agreed that North Korea was following its own schedule to ramp up military capabilities in a time when there's a slim chance of negotiating with other countries in person.

“North Korea is in the direction of enhancing the technical completeness of their missile program and knocking on the United States, trying to persuade them they should reach out to North Korea in any way,” Kim told ABC News.

It isn’t the first time North Korea has scaled up in its weapons experiments. Back in 2019, North Korea fired over 20 short-range ballistic missiles between May and November.

Expectant mothers in quarantine are only given two painkiller pills a day — the same treatment given to all COVID-19 patients, sources told RFA.
PUBLIC HEALTH・2 DAYS AGO
Salon

Fox News host Lisa Kennedy said on Monday that U.S. lawmakers "should not have the government involved in education at all," suggesting that America should rid itself of the public school system entirely. Kennedy's remarks came during Monday's segment of "Outnumbered" in which Kennedy was facilitating a discussion around the...
CONGRESS & COURTS・29 DAYS AGO
Newsweek

"After Ukraine, if we're given the command, in six seconds we'll show you what we're capable of," Chechen leader Ramzan Kadyrov said.
POLITICS・16 HOURS AGO
Newsweek

The intelligence the U.S. shared with Ukraine helped it continue to resist Russian invading forces and even shoot down a transport plane carrying hundreds of Russian troops, a new report revealed. According to current and former U.S. officials who spoke with NBC News on Tuesday, the U.S. provided critical intelligence...
MILITARY・29 DAYS AGO
Salon

A plethora of downright bizarre scientific research from the Department of Defense previously kept under wraps has been uncovered, revealing an array of peculiar schemes proposed by the United States military. One outlandish proposal suggested detonating nuclear bombs on the moon to create a tunnel through it. Millions in taxpayer dollars were spent on the research, which appears to have relied on a contractor, Bigelow Aerospace Advanced Studies, which was owned by multi-millionaire Robert Bigelow, a hotel impresario. The public was kept in the dark until now regarding what research was being funded.
ASTRONOMY・29 DAYS AGO
Business Insider

International order will be thrown out the window if Russia is able to escape consequences over its invasion of Ukraine, US Gen. Mark Milley told CNN.
POLITICS・29 DAYS AGO
Newsweek

The brigade said it hit the base of the Russian command staff and destroyed a military SUV marked "Z," killing several enemy soldiers in the process.
MILITARY・1 DAY AGO

US president Joe Biden mocked walking out of a meeting with Australia’s prime minister Anthony Albanese after the latter recalled a trip to the US in his younger days and a visit with the National Rifle Association (NRA) more than three decades ago.Mr Biden pretended to storm out just hours before a teen gunman murdered 19 children and two teachers in an elementary school in Texas’ Uvalde town, in one of the worst mass shootings witnessed by the US in years.During his discussion with the US president on the sidelines of the Quad summit on Tuesday, Mr Albanese narrated...
POLITICS・23 HOURS AGO
americanmilitarynews.com

WASHINGTON (Reuters) - The United States on Tuesday offered a reward of up to $10 million for information on six people it described as Russian military intelligence officers who had conducted cyber attacks affecting critical U.S. infrastructure. The six officers work in a cyber-focused unit of Russia's Main Intelligence Directorate...
PUBLIC SAFETY・29 DAYS AGO
Salon

On March 6, 2022, 14 days into Russia's war against Ukraine, a video was shared on Facebook showing seven-year-old Amelia Anisovych singing "Let it Go," the hit song from the Disney musical "Frozen," inside a crammed Kyiv bunker. A sign of beauty, resilience and hope, it was viewed more than eight million times within days of posting.
POLITICS・1 DAY AGO

In an interview with Russian TV, Sergei Lavrov said that Russia is essentially at war with NATO. This rhetoric has some worried that Russia may use nuclear weapons in Ukraine. Lt. Col. Dakota Wood weighed in on the likelihood of this happening.
POLITICS・29 DAYS AGO
ABC News

Hungary announces 'state of danger' over war in Ukraine

BUDAPEST, Hungary -- Hungary has declared a legal “state of danger” in response to Russia's war in neighboring Ukraine, the prime minister announced Tuesday, allowing the right-wing nationalist government to take special measures without the participation of the legislature. In a video on social media, Prime Minister Viktor...
POLITICS・2 DAYS AGO
Reuters

WASHINGTON, May 26 (Reuters) - U.S. Senate Republicans were poised on Thursday to block a bill aimed at combating domestic terrorism that Democrats see as a response to this month's white supremacist mass shooting in New York state and a potential gateway to a gun control bill. Two days after...
CONGRESS & COURTS・25 MINUTES AGO
Reuters

KYIV, May 26 (Reuters) - Ukraine's richest man says he plans to sue Russia over what he said was $17 billon to $20 billion in losses caused by its bombardment of steel plants he owns in the devastated city of Mariupol. The Azovstal steelworks suffered heavy damage from Russian bombing...
ECONOMY・22 MINUTES AGO
The Guardian

No 10 spokesperson apologises for misleading media on lockdown parties

Boris Johnson’s official spokeperson has formally apologised for misleading the media in repeatedly denying any parties took place inside Downing Street during lockdown, while insisting this was entirely inadvertent. The spokesperson also reiterated No 10’s defence of the repeated leaving drinks held for staff amid the pandemic, arguing the...
POLITICS・19 MINUTES AGO
The Guardian

International judicial figures including the former UK attorney general Sir Robert Buckland have warned the remaining British, Australian and Canadian judges operating in Hong Kong that they are working in an environment where judicial independence has been wholly undermined and the Chinese Communist party can dictate the outcome of cases.
POLITICS・21 MINUTES AGO
Reuters

WASHINGTON, May 26 (Reuters) - K-pop superstars BTS will head to the White House next week to address hate crimes targeting Asians and people of Asian descent with U.S. President Joe Biden, the White House said in a statement on Thursday. Biden would host the global phenomenon musical group on...
U.S. POLITICS・23 MINUTES AGO
Reuters

May 26 (Reuters) - Russia is advancing a new law allowing it to take control of the local businesses of western companies that decide to leave in the wake of Moscow’s invasion of Ukraine, raising the stakes for multinationals trying to exit. The law, which could be in place...
BUSINESS・33 MINUTES AGO