Just when it seemed video game stocks were in a lull following the surge in growth during 2020, Take-Two Interactive (NASDAQ: TTWO) made waves with the announced acquisition of top mobile game maker Zynga (NASDAQ: ZNGA) for $12.7 billion.

The deal is a reminder of the opportunities for top video game companies. The $175 billion video game industry is highly fragmented, where the combined revenue from Activision Blizzard (NASDAQ: ATVI) , Take-Two, Zynga, and Electronic Arts (NASDAQ: EA) comprises only 12% of an industry that has grown for decades. This is an opportunity for leading game makers to make more deals that are accretive to the bottom line over the next several years, which could juice returns to shareholders. That's one reason to consider buying Take-Two this year. 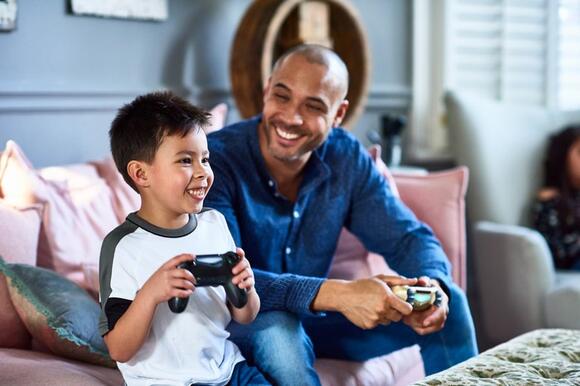 Take-Two has grown the top line faster than its peers, too. This has led to much better returns for investors, with Take-Two stock delivering a return of 206% over the last five years, compared to 67% for Electronic Arts and 64% for Activision Blizzard.

The Zynga deal won't close until the June-ending quarter, but Take-Two looks like the best value stock in video games on a price-to-sales basis. The combined company generated pro forma net bookings -- a non-GAAP (adjusted) measure of revenue -- of $6.1 billion on a trailing-12-month basis through September 2021.

Take-Two expects to issue between 50 million and 58 million shares to help finance the acquisition. Assuming the deal was already complete, Take-Two's market cap (stock price times shares outstanding) would be $26.7 billion at the current share price of $157.

This brings Take-Two's price-to-sales (P/S) multiple down to 4.4 with the addition of Zynga, based on pro forma trailing-12-month bookings. Even without Zynga, Take-Two has been the better value based on the P/S ratio over the last few years, which should lay the foundation for further outperformance relative to its peers. 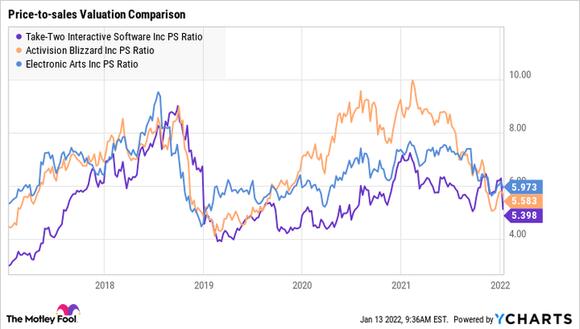 Analysts were already expecting Take-Two to grow earnings per share at an annualized rate of 13% per year over the next five years. Following the Zynga deal, Take-Two expects bookings to grow at a compound annual rate of 14% per year through fiscal 2024.

However, the guidance doesn't include the development of new mobile titles based on Take-Two's intellectual property, and the resulting growth in recurrent consumer spending (e.g., in-game spending). It also excludes growth in monthly active users by leveraging Zynga's Chartboost adtech platform, and penetration across new geographies, such as India and the Middle East. These opportunities are expected to contribute as much as $500 million in annual bookings that are not included in management's 14% annualized growth guidance.

3. Take-Two is building a monster

There has been a flurry of deal-making activity in the video game industry over the last few years. Remember, Microsoft acquired ZeniMax Media, operator of the Bethesda studio, in 2020 for $7.5 billion, while Electronic Arts scooped up Glu Mobile and Codemasters last year for more than a few billion combined. One benefit is to expand monthly active users, build scale, and spread development costs over a larger player base to improve returns, especially with games getting more expensive to make.

The transaction with Zynga is expected to close in the first quarter of fiscal 2023 ending in June. The deal will be accretive to Take-Two's cash flow upon closing. The company will maintain a "fortress-like balance sheet, with very little debt," Take-Two CEO Strauss Zelnick told analysts on a call.

Pro forma adjusted operating cash flow for the trailing-12-month period was $769 million for both companies through the September-ending quarter. As a result, Take-Two will have more cash to pounce on new opportunities. With respect to acquisitions, Zelnick told analysts on a call they are looking for "great teams, great intellectual property, and accretive transactions."

The growth of the video game industry offers long-term upside for patient investors, and Take-Two's relatively lower valuation and growth catalysts make it one of the best gaming stocks to hold for the next five years and beyond.

10 stocks we like better than Take-Two Interactive
When our award-winning analyst team has a stock tip, it can pay to listen. After all, the newsletter they have run for over a decade, Motley Fool Stock Advisor , has tripled the market.*

They just revealed what they believe are the ten best stocks for investors to buy right now... and Take-Two Interactive wasn't one of them! That's right -- they think these 10 stocks are even better buys.

The lights are flashing green for long-term growth opportunities for these two tech stocks.
STOCKS・12 HOURS AGO

Why AutoZone Stock Jumped 15% This Week

Sales trends are looking strong through early May.
STOCKS・11 HOURS AGO
The Motley Fool

Market drops are the best time to put money to work and juice long-term returns.
STOCKS・11 HOURS AGO

Can Shopify's Stock Catch a Break?

Shopify's stock price has dropped over 70%, but is it all bad?
STOCKS・11 HOURS AGO
The Motley Fool

The technology sector is rife with bargains after the big pullback in prices.
STOCKS・12 HOURS AGO
The Motley Fool

These stocks could be good places to park your money.
STOCKS・2 DAYS AGO
The Motley Fool

Why Zoom Stock Soared This Week

MercadoLibre is a success story that shows inflation is not necessarily an obstacle to rising profits.
STOCKS・13 HOURS AGO
The Motley Fool

Compared to 2019, Dick's results are fantastic -- and its stock looks cheap.
STOCKS・9 HOURS AGO
The Motley Fool

The company was a laggard in the retail stock recovery race.
STOCKS・12 HOURS AGO
The Motley Fool

Why Apple Stock Is Rising Today