If you had invested in any one of the FAANG stocks 10 years ago, you'd be pleased. On average, FAANG stocks have returned an astounding 1782% over the last 10 years versus the market's 325%. Each has changed the world in a different way, and all are continuing to do it.  These companies have become engrained in daily life and in many investment portfolios. The stocks making up the FAANG acronym are large tech companies that have dominated the market recently. These stocks are:

Three of the five lost to the market during 2021, but one stood out above the rest. 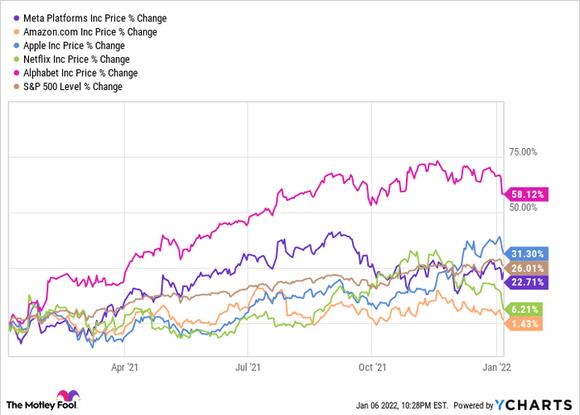 After more than doubling the growth of the market in 2021 , Alphabet seems primed to outperform the rest again.

Alphabet's dominance in its primary businesses is astounding. The Google search engine has a 92% worldwide market share. It makes almost no sense for businesses to spend search engine optimization (SEO) advertising dollars anywhere besides Google. With nearly every business having an online presence, advertising on Google is necessary so that the website isn't buried beneath others. This segment accounts for over half of total revenue, making it the most important for Alphabet. 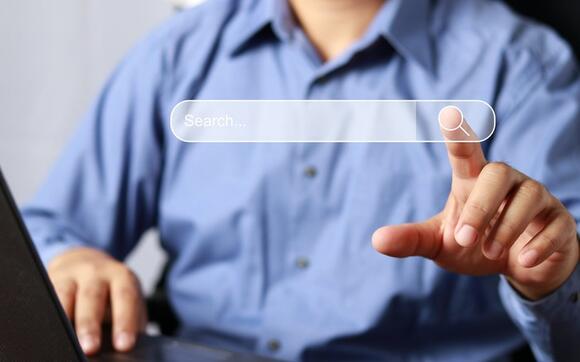 YouTube -- the popular video-sharing platform -- also falls under the Alphabet umbrella. Once again, it holds a significant online video platforms market share at 76%. Additonally 74% of U.S. adults accessed YouTube in 2020, more than any other social media site including second-place Facebook (68%). While video ads may be annoying, they represent a significant targeted advertising opportunity. For example, someone looking up home improvement videos may see tool or material supply ads. Because the advertisers aren't broadcasting to a wide audience -- like on TV or a billboard -- Alphabet can ensure the ads reach the intended viewer.

The cloud computing market is valued at $455.3 billion but is expected to grow to $947.3 billion by 2026. This is a gigantic industry where many winners can succeed. However, Google will need to step up its game if it hopes to close the gap Amazon and Microsoft have created. During the third-quarter conference call, management noted they are aggressively hiring in its cloud division to better complete. One differentiator that might elevate Google Cloud is its minimal carbon footprint. Alphabet claims it is the world's "cleanest cloud" with two-thirds of the energy consumed by data centers coming from carbon-free sources and plans to go completely carbon-free by 2030. While this isn't a technological advantage, it is an attractive bullet point when attempting to win a contract.

Alphabet generates massive piles of cash and is stockpiling it too

As an almost $2 trillion company, sheer size makes it difficult to grow quickly. However, Alphabet's growth numbers buck this trend. Its Q3 revenue increased 41% to $65.1 billion. 29% of revenue was converted to net income , giving Alphabet plenty of financial resources.

Its balance sheet has an astounding $142 billion in cash, equivalents, and marketable securities and only $14.2 billion in debt. With a snap of a finger, Alphabet could scoop up several sizable companies. However, Alphabet has been in the federal government's crosshairs for some time for antitrust behavior.

A group of states -- led by Texas -- is suing Google for antitrust behaviors in its advertising business. This comes after the company paid a $2.8 billion fine to the European Union for prioritizing its price comparison service over competitors. Multiple other lawsuits are pending against Alphabet for similar behavior, but with the cash it generates, Alphabet can continue paying the fines. Investors must decide if they can live with owning a company that consistently violates standards governments set or if they want to look somewhere else.

Channeling the cash pile into buybacks

Besides outright growth, Alphabet is reducing its share count by repurchasing stock. It approved an additional $50 billion buyback program in April, augmenting an already ongoing one. Over the last nine months, Alphabet has retired $36.8 billion in shares, or about 2% of its current market cap. Alphabet has been repurchasing shares for a few years and will probably continue that practice, as regulators will likely shut down any acquisitions, leaving few options for management. Plus, Alphabet generated more than $65 billion in free cash flow over the last 12 months, so it can easily finance continued buyback operations. 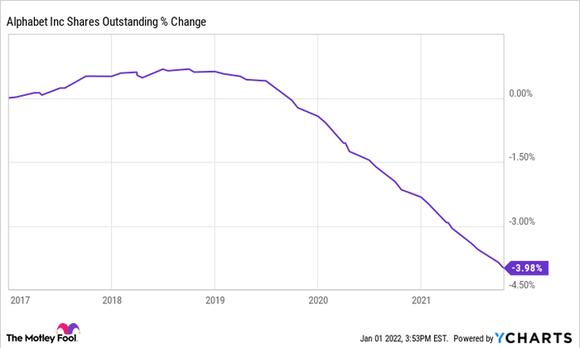 After reducing the outstanding share count, each existing share owns a larger slice of Alphabet, making them more valuable.

The cloud computing market is far from mature and represents a huge opportunity. Once a company begins using the service, the recurring revenue model generates more revenue as the customer stays on the platform. Alphabet needs to step up its game to catch the other two, but this will still be a revenue-huge segment even if it isn't the leader.

The valuation is also reasonable compared to the others when assessed from a price-to-earnings (PE) standpoint. 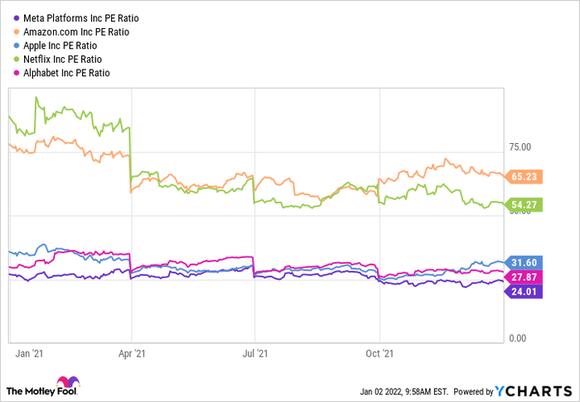 With only Meta Platforms valued lower, I believe the valuation risk is minimized. Even retailers like Costco (NASDAQ: COST) and Walmart (NYSE: WMT) both have a PE multiple around 50, yet Alphabet's margin profile is much stronger than the other two. Alphabet is undervalued, and multiple expansions could push the stock price higher.

At the end of the day, Alphabet has the two most visited websites in the U.S. Ads are not going away, and both Google and YouTube have a successful model in place to monetize them. Alphabet will continue to grow rapidly in both these areas, driving more revenue, and it will use that cash flow to repurchase stock. I believe this mechanism will drive Alphabet to outperform the other FAANG stocks, not only this year but over the next five as well. Alphabet is a great cornerstone stock in a portfolio, and investors would be wise to add it to theirs.

10 stocks we like better than Alphabet (C shares)
When our award-winning analyst team has a stock tip, it can pay to listen. After all, the newsletter they have run for over a decade, Motley Fool Stock Advisor , has tripled the market.*

They just revealed what they believe are the ten best stocks for investors to buy right now... and Alphabet (C shares) wasn't one of them! That's right -- they think these 10 stocks are even better buys.

The lights are flashing green for long-term growth opportunities for these two tech stocks.
STOCKS・16 HOURS AGO

These stocks have been big winners in the past and they could rise even more over the next decade.
STOCKS・1 DAY AGO

Believing in electric vehicles back then would have made you very wealthy indeed.
STOCKS・14 HOURS AGO
The Motley Fool

Your financial goals define the role dividend stocks can play (or not play) in your portfolio.
STOCKS・17 HOURS AGO
The Motley Fool

These beaten-down digital assets are backed by a compelling investment thesis.
STOCKS・1 DAY AGO

Market drops are the best time to put money to work and juice long-term returns.
STOCKS・15 HOURS AGO
The Motley Fool

The technology sector is rife with bargains after the big pullback in prices.
STOCKS・17 HOURS AGO
The Motley Fool

Talk about a dire warning.
BUSINESS・1 DAY AGO

MercadoLibre is a success story that shows inflation is not necessarily an obstacle to rising profits.
STOCKS・18 HOURS AGO
The Motley Fool

The company was a laggard in the retail stock recovery race.
STOCKS・17 HOURS AGO
The Motley Fool