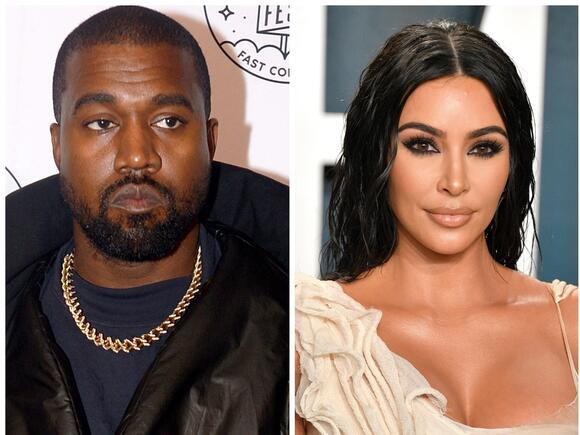 Ye (the artist formerly known as Kanye West) has confirmed reports that he bought a house opposite his estranged wife Kim Kardashian West and explained the purchase during an interview with Hollywood Unlocked .

Late last year, it was reported that Ye purchased a $4.5m home opposite Kim Kardashian's residence in Los Angeles after the reality TV star filed for divorce.

During his interview with Hollywood Unlocked's Jason Lee, Ye said the purchase was initiated by his desire to see his children.

​"My solace comes from seeing my kids and getting a solid schedule. That's why I even got the house," Ye told the outlet. "They flipped it into there was something wrong with me getting a house next to my kids."

Later during the interview, Ye said he is been motivated by the lack of time he spent with his father during his childhood.

"You see when my mom took me from Atlanta to Chicago, my dad didn't come to the coldest and most dangerous city in the world to be next to me. He said, 'I'm going to stay down in Atlanta because of my career,'" West said.

"Nothing with my career, with this rap, with this media, with none of that, that's gonna keep me from my children. And that's what I want everybody to know."

Ye later appeared to issue a warning that there is no reality where he will be kept away from his children.

Kardashian West filed for divorce from Ye in February 2021 after seven years of marriage. The couple married in May 2014 in a ceremony in Italy, and have four children together — North, 7; Saint, 5; Chicago, 2; and Psalm, 1.

The reality TV star has most recently been linked with the comedian and actor Pete Davidson. Conversely, the actor Julia Fox — who is best known for her role in the Safdie Brothers film "Uncut Gems" — has publicly confirmed her relationship with Ye in several blog posts for Interview Magazine .

Kim Kardashian's ex-husband, Damon Thomas, continues to "wish her the best," despite any false narratives about their past relationship. The 51-year-old sat down with DJ Vlad, looking back at his marriage with now-billionaire businesswoman Kim Kardashian in the early 2000s. He believes he's played a "part in their journey," however, he doesn't want to be known as "Kim Kardashian's husband" and wants to "get in control of [his] narrative," as many people fail to recognize he has won Grammys and even made it to the Oscars.
RELATIONSHIPS・25 DAYS AGO
The Associated Press

LOS ANGELES (AP) — Kim Kardashian testified Tuesday that she had no memory of making any attempt to kill the reality show that starred her brother Rob Kardashian and his then-fiancée Blac Chyna. But she acknowledged demanding that Chyna be kept off of “Keeping Up With the Kardashians” after hearing Chyna had abused her brother.
LOS ANGELES, CA・25 DAYS AGO
Insider

According to Tina Brown's new book, "The Palace Papers," Prince William was aware of his status as future king from a young age.
CELEBRITIES・25 DAYS AGO
OK! Magazine

Donald Trump didn't hold back when asked his opinions on the royal family during a sit down for Piers Morgan Uncensored. While chatting with the titular host for an interview that airs on Monday, April 25, the former president took aim at Meghan Markle, insisting he hasn't been "a fan" of hers "from the beginning" because of how she treats Prince Harry."Poor Harry is being led around by his nose," he told Piers Morgan. "And I think he’s an embarrassment." Trump also believes that the parents-of-two's dynamic will eventually lead to irreparable marital strife. "I want to know what’s going...
RELATIONSHIPS・26 DAYS AGO

Laughter erupted in courtroom after Johnny Depp said he doesn’t watch his own movies and couldn’t recall the question he was asked. “I don’t watch them. I feel better not watching them. What was the question again?” Mr Depp said to laughter from the room. Johnny Depp trial – latest updates“Order in the court, or I will have you removed,” Judge Azcarate said. “Understood? Thank you.”The defamation trial between Mr Depp and Amber Heard began on Monday 11 April in Fairfax, Virginia following Mr Depp’s lawsuit against his ex-wife in March 2019. Mr Depp is arguing that she defamed him...
CELEBRITIES・26 DAYS AGO
The Hollywood Reporter

Netflix has canceled another one of its major shows, with this one getting the ax after only two seasons. Variety reports that hit sci-fi drama Raising Dion has been dropped by the streamer, following its recent season debut. The news seems to have been revealed by series star Sammi Haney, who shared the news with fans on Instagram. "Sad to say that Raising Dion is CANCELED [sic] Thank you for all of the amazing support we got from all of our wonderful fans!" Haney wrote, in part. "Season 2 was a success, equal to Season 1, even if just looking at how many people watched all of it and wanted a season 3!"
TV SERIES・25 DAYS AGO

Megan Fox wants her kids to express themselves however they please. In a wide-ranging interview with Glamour U.K. for their April cover story, the 35-year-old actress opens up about how she teaches her children, Journey River, 5, Bodhi Ransom, 8, and Noah Shannon, 9, about gender identity and encourages them to be confident in who they are.
FAMILY RELATIONSHIPS・25 DAYS AGO
OK! Magazine

Prince William and Prince Harry's relationship has been strained ever since the bombshell Oprah Winfrey tell-all which was later followed by Harry and his wife, Meghan Markle, abandoning their royal duties and moving to the United States. Now, royal author Robert Jobson is further opening up about what he's learned about The Duke Of Cambridge over the years. According to his sources, William is still very disappointed about the sit-down, and at one point, wasn't sure what the future would hold for their brotherly bond. "To say William felt deeply let down would be an understatement," a source claimed per...
CELEBRITIES・27 DAYS AGO
People

Paulina Gretzky walked down the aisle in Vera Wang!. The bride shimmered during her wedding with pro golfer Dustin Johnson on Saturday at Tennessee's Blackberry Farm. Gretzky showed off the stunning look on Instagram Monday in a photo of the newlyweds kissing. "4/23/22♥," she simply captioned the post. For...
BEAUTY & FASHION・25 DAYS AGO
Outsider.com

50 Cent cast doubt on Megan Thee Stallion's recent comments about not having been in an “intimate relationship” with Tory Lanez, prior to the infamous shooting in July 2020 which left her with gunshot wounds. Megan's comment came during a recent interview with Gayle King, during which she...
CELEBRITIES・25 DAYS AGO
Insider

In episode six of "The Kardashians," Kourtney Kardashian's children voiced their objections to her kissing then-fiancé Travis Barker.
RELATIONSHIPS・2 DAYS AGO
The Independent

A woman has revealed several “red flags” that she found in the apartment of the man she’s dating, which included two books about pregnancy and a woman’s ring.In a recent video shared to TikTok, Devin, @discoveringdevin, filmed herself sitting on a bed and putting her thumb down, as the text reads: “Red flags in his apartment.”She then began by showing four Apple MacBooks, all placed on top of each other, on a desk. “Four laptops…what are you hiding?” Devin wrote in the text over the clip.Next, she documented what appeared to be a “girl’s ring” on a white shelf....
RELATIONSHIP ADVICE・26 DAYS AGO
hotnewhiphop.com

It seems Coi Leray is getting fed up with the drama. She and her father, Benzino, have not seen eye to eye for quite some time, and despite numerous attempts to mend their relationship, they keep ending up back at square one. Yesterday, 50 Cent, whose been feuding with Benzino...
CELEBRITIES・27 DAYS AGO
Outsider.com

“NCIS: Los Angeles” star Daniela Ruah absolutely killed it on the red carpet and stage last night at the International Portuguese Music Awards. While everyone at home was preparing for tonight’s “NCIS: Los Angeles” episode, Daniela Ruah was getting all dressed up to host the IMPA Awards. The ceremony took place at the Providence Performing Arts Center in Providence, Rhode Island, on Saturday, April 23.
LOS ANGELES, CA・27 DAYS AGO
Insider

"The sisters are clearly concerned for our brother's safety and the credibility of the brand," Khloe Kardashian wrote in a 2016 email.
LOS ANGELES, CA・26 DAYS AGO
PopCrush

90 Day Fiancé: Before the 90 Days star Johnny Chao is showing off a new look on social media. The reality TV star rocked a fresh-faced look on the show. However, Chao debuted some new facial hair in his most recent post on Instagram. More specifically, he grew a beard and mustache.
TV & VIDEOS・25 DAYS AGO
Popculture

Spring is always a big time for engagements and weddings, and two beloved internet personalities are the latest to update their relationship status. On April 18, Rachel "Seltzer" Quirico revealed she and longtime boyfriend Trevor "TorcH" Housten were tying the knot after 17 years together. Both of them are beloved figures in the esports world, with Seltzer notably starring in the Syfy reality show WCG Ultimate Gamer. She's also hosted numerous esports tournaments and events for TV/streaming outlets; she also made a recent appearance on G4 TV's Boosted.
RELATIONSHIP ADVICE・26 DAYS AGO