Share prices of Rivian Automotive (NASDAQ: RIVN) briefly fell to $75.13 per share on Friday before closing the session at $79.95 per share. It was the first time Rivian stock dipped below its initial public offering (IPO) price of $78 per share. The sell-off marks over a 55% drawdown from the stock's all-time intraday high of $179.47 per share set on Nov. 16, 2021.

Here are arguments for and against buying the electric vehicle (EV) stock now. 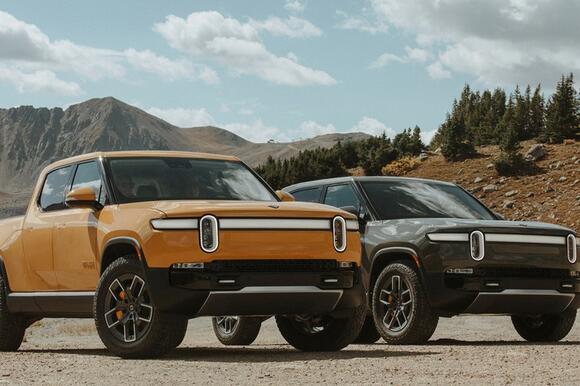 Howard Smith : Markets aren't always efficient, and that's how investors can gain an advantage. While Rivian shares have dropped recently in concert with many high-growth tech names, one of the biggest dips came with the news that Amazon (NASDAQ: AMZN) was starting a partnership with Chrysler parent Stellantis (NYSE: STLA) to supplement its supply of electric delivery vans. Prior to this news, investors only knew that Amazon -- an early investor in Rivian -- had placed an initial order for up to 100,000 delivery vans from Rivian. That relationship lent much credibility and promise to an investment in Rivian.

But what some investors might have missed was what an Amazon spokesman told CNBC: "We always knew that our ambitious sustainability goals in our last mile operations would require multiple electric delivery van providers. We continue to be excited about our relationship with Rivian, and this doesn't change anything about our investment, collaboration, or order size and timing."

Rivian reported it produced its first 1,000 vehicles at the end of 2021. The current annual production capacity at its Illinois facility is only 150,000, though the company is already making investments to raise that to 200,000. And it has announced plans for a second manufacturing plant in Georgia where it hopes to begin production in 2024.

So in reality, the fact that Amazon is spreading its orders out right now doesn't really mean anything to Rivian. It couldn't effectively produce any more for Amazon if it also plans to fulfill its more than 71,000 reservations for the R1T pickup truck it already has.

If one was willing to invest in Rivian for the very long-term at its early valuation, the recent drop in price just provides a better entry point. Any investment in Rivian is speculative, but once an investor has decided to take that chance based on its potential success, this recent pullback to its IPO price provides an opportunity.

Rivian has potential, but it's too early to buy yet

Daniel Foelber: Rivian stock is cheaper than it's ever been. But that doesn't automatically make it the best buy in the space. As Howard said, the market can be irrational in the short term. But in this case, there are good reasons why Rivian has performed so much worse this year than other major automakers. 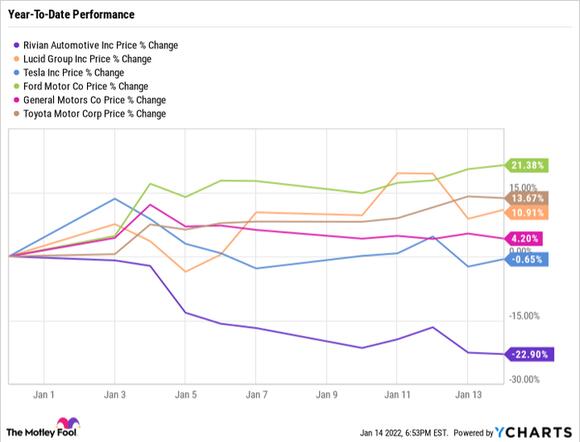 When an individual stock is going down while its industry is going up, that's usually a red flag. The market is telling us that it's reevaluating Rivian relative to its peers. Ford (NYSE: F) was worth $40 billion this time last year. Now it's worth over $100 billion. On Dec. 31, 2021, Rivian was worth $93.4 billion and Lucid Group (NASDAQ: LCID) was worth $62.6 billion. Now, they are both worth roughly $70 billion.

The comparison to Lucid is particularly interesting. Rivian has double the cash that Lucid has, more than triple Lucid's existing manufacturing capacity , and around quadruple the number of reservations. From the get-go, Rivian is shaping up to be a bigger and bulkier company than Lucid . But what Lucid lacks in size it makes up for with accountability.

The primary difference between Lucid and Rivian isn't technology or market potential. It's that Lucid continues to hit its targets while Rivian has already overpromised and underdelivered and its chief operating officer left in December.

When it comes to a young company whose value derives from a vague image of what it could be and not what it is today, it's important to build a reputation for exceeding expectations, not coming up short. Given the fierce competition from Ford and General Motors in the pickup truck market, and Tesla (NASDAQ: TSLA) and several other luxury legacy automakers in the sedan market, Lucid and Rivan don't have wiggle room to make mistakes. The clock is ticking for both companies, with 2022 being a "prove it" year. Rivian needs to build investor trust. Until that happens, it's not worth buying.

Do what's best for your risk-reward profile

EV investors are no strangers to the battleground nature of the auto industry. Starkly contrasting opinions about Tesla have existed since its inception and carry on to this day. Rivian and other newcomers like Lucid will likely face the same blend of support and skepticism until they fail or mature into their respective leaders' visions.

The best course of action if you're interested in a high-risk high-reward company like Rivian could be to choose the point on its timeline that best suits how much risk you want to take.

Is it now when the stock is on sale but there's a lot of uncertainty? Is it at the beginning of 2023 once we know whether Rivian hit its production and delivery goals? Or is it once Rivian is producing hundreds of thousands of vehicles a year for profit? That decision is up to your personal risk tolerance. If Rivian becomes a massive success, then buying the stock now will likely produce more gains than once it's established. If Rivian fails, you'll probably lose a lot more money now than if you wait to see if its cracks start to widen.

Buying Tesla now that it's a highly profitable polished company is less risky than buying Tesla a few years ago. But in the process, you also missed out on the 2,670% gain that Tesla stock had between May 2019 and today.

Despite our different opinions on Rivian, Howard and I agree that if you've been waiting for a chance to open a starter position in Rivian, you like the company, and you want to hold it for decades to come, then now is probably as good a time as any to nibble.

An astounding lack of cashflow is Walmart's biggest problem.
BUSINESS・2 DAYS AGO
The US Sun

Silk Road founder Ross Ulbricht is forfeiting billions of dollars worth of Bitcoin (BTC) and other crypto assets to the US government. According to a new court filing, Ulbricht will relinquish any claim to over 69,000 BTC and undisclosed amounts of Bitcoin Gold (BTG), Bitcoin SV (BSV) and Bitcoin Cash (BCH) worth a combined $3 billion as part of a settlement.
PUBLIC SAFETY・26 DAYS AGO
Kristen Walters

Sprouts Farmers Market, a popular regional grocery store chain in California, is closing two of its locations on June 3, 2022. Read on to find out which store locations will be affected by the closures.
CALIFORNIA STATE・2 DAYS AGO

Elon Musk, the world’s wealthiest man, who thinks tunnels are immune to natural disasters, is purchasing Twitter. The company confirmed on Monday afternoon that it had accepted the billionaire’s offer. “Twitter, Inc. today announced that it has entered into a definitive agreement to be acquired by an entity wholly owned by Elon Musk, for $54.20 per share in cash in a transaction valued at approximately $44 billion,” reads the official press release. “Upon completion of the transaction, Twitter will become a privately held company.”
BUSINESS・26 DAYS AGO
DoYouRemember?

A man presumed to be McDonald’s employee has shown the general public how to get the newly made chicken nuggets when ordering from McDonald’s. This is one of the many problems encountered by customers daily. Using his TikTok account @nicaraguanjesu, the faceless worker displayed footage of the heat boxes used in the kitchen of a McDonald’s restaurant which was full of nuggets.
RESTAURANTS・1 DAY AGO
The Motley Fool

The discount retailer provided its first-quarter earnings and an update for the year, and Wall Street didn't like what it saw.
STOCKS・1 DAY AGO

You could make even more with several of the stocks continuing to soar this year.
STOCKS・1 DAY AGO
Markets Insider

Tesla has started underwriting auto insurance. Buffett previously said he would bet against any car company becoming a big winner in the space.
ECONOMY・26 DAYS AGO
The Motley Fool

This healthcare stock looks like a bargain today.
STOCKS・1 DAY AGO
Business Insider

A member of a superyacht crew also told The Times of London that one owner had his bar stools made from whale foreskin.
BOATS & WATERCRAFTS・28 DAYS AGO