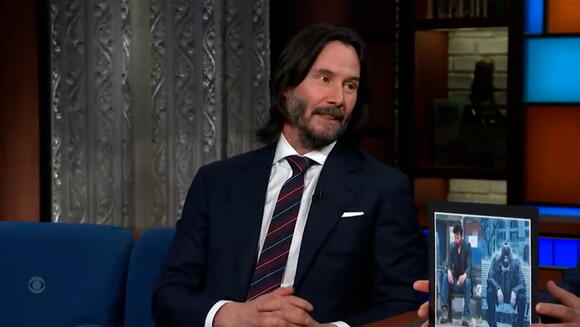 Keanu Reeves has revealed that his favourite song is Joy Division ’s “Love Will Tear Us Apart”.

Appearing on The Late Show with Stephen Colbert last week [13 January], The Matrix actor took part in a segment of the show where he was asked a series of questions to “penetrate the soul”.

During it, Reeves was quizzed about what song he would listen to for the rest of his life and after some deliberation, eventually answered “Love Will Tear Us Apart” by Joy Division.

The actor, known for his roles in John Wick , Point Break and The Devil’s Advocate , also shared a memory of getting legendary comedian George Carlin’s autograph: “He wrote, ‘Dear Keanu, F*** You,’ I always thought he just wrote that for me, but then I met someone else who said that he wrote the same thing to them.”

Reeves can currently be seen in cinemas in The Matrix Resurrections , the fourth installment in the sci-fi action series. The film has received polarising reviews.

In a four-star review , The Independent ’s Clarisse Loughrey called it “a volcanic cluster of ideas at a time when Hollywood is all-too content to slap the broad declaration of ‘it’s really about trauma’ on a film and call it a day”.

You know that song has been streamed more times in the last four days than it has since 1980 when it was released.

RAY Liotta, the brilliant actor who made his name in Martin Scorsese's crime classic Goodfellas, has passed away. The star died in his sleep in the Dominican Republic, where he was filming Dangerous Waters, according to Deadline. There were no signs of foul play or anything suspicious about the death,...
CELEBRITIES・1 DAY AGO
Hello Magazine

Kevin Bacon's City on a Hill co-star Marnie Schulenburg has tragically passed away from cancer at the age of 37. The Hollywood star worked alongside Marnie in the Showtime program, with her death being announced last week. The actress left behind her husband Zack Robidas and the couple's two-year-old daughter...
CELEBRITIES・4 DAYS AGO
The Independent

Goodfellas star Ray Liotta has died at the age of 67, his representative has confirmed to the PA news agency.His publicist Jennifer Allen, from Viewpoint, said the actor died in his sleep in the Dominican Republic, where he was filming his latest movie Dangerous Waters.Liotta’s fiancee Jacy Nittolo was on location at the time of his death, Ms Allen said.Liotta found fame playing ex-con Ray Sinclair in 1986 black comedy Something Wild, for which he received a Golden Globe nomination.He went on to star as Shoeless Joe Jackson in the 1989 film Field Of Dreams and is best known for...
CELEBRITIES・1 DAY AGO
The Independent

A trial by TikTok and the death knell for MeToo. Who won Depp v Heard?

Of all the accusations to emerge from the bombshell defamation trial opposing Johnny Depp and Amber Heard over the last six weeks, one of the most memorable came from social media.On 5 May, the internet blew up with online sleuths claiming they had caught Amber Heard snorting cocaine on the witness stand at the court in Fairfax, Virginia.Short video snippets began circulating of the Aquaman actress blowing her nose with a tissue during a pause in her courtroom testimony.“Amber Heard snorting coke on the stand is the craziest thing I have ever seen,” one person captioned one particular YouTube video...
BEHIND VIRAL VIDEOS・9 HOURS AGO

Fans are calling Kris and Kylie Jenner out for their reactions to doing ‘normal’ people things: ‘Cringing’

Kris and Kylie Jenner are being called out online for their reactions to doing a day of “normal” people activities.In the seventh episode of The Kardashians, which premiered 26 May, the mother-daughter duo were driving in the car when a pregnant Kylie said to her mom: “I just want to do normal things with you.”In an effort to be normal, the two proceeded to shop for their own groceries, pump their own gas, and visit a car wash. After Kris admitted that she hadn’t been to a grocery store in two years, the pair pulled up to Vintage Grocers in...
CELEBRITIES・1 DAY AGO
The Independent

Cannes: Indigenous filmmaker says he was initially turned away from the red carpet for wearing moccasins

Security personnel turned away Canadian Indigenous filmmaker Kelvin Redvers at a red carpet screening at Cannes earlier this week. Redvers, who is a member of the Dene nation, was wearing traditional moccasins to the black-tie only event.“I was hoping to wear an example of something that would be formal for my culture, which was a beautiful pair of moccasins that were actually beaded by my sister,” the filmmaker said in an interview with Variety following the incident. “I was pretty excited to wear those.”After receiving a formal complaint from Canada’s Indigenous Screen Office, Cannes representatives met with Redvers and...
MOVIES・59 MINUTES AGO
Variety

ABBA’s ‘Voyage’ CGI Extravaganza Is Everything It’s Cracked Up to Be, and More: ‘Concert’ Review

Click here to read the full article. “To be or not to be, that is no longer the question,” declared ABBA co-founder and musical mastermind Benny Andersson at the start of “ABBA Voyage,” the Swedish quartet’s first “concert” in over 40 years. And if that sounds like a curiously existential way to begin a pop concert, well, this is no ordinary live show. For a start, despite Andersson’s insistence that “This is really me, I just look very good for my age,” it’s actually his de-aged, computer-generated avatar — or “ABBA-tar,” if you must — that is speaking his pre-recorded words....
MUSIC・24 MINUTES AGO
The Independent

Stranger Things: How is the Netflix hit series related to the Fear Street trilogy?

Stranger Things has finally returned.Season four of the hit Netflix series arrived on the streaming giant on Friday (27 May) with seven new episodes now available to watch.With fans digging into the new series, many viewers have been reminded of Netflix’s Fear Street trilogy.Last year, RL Stine’s best-selling horror novels – originally published in the Nineties – were adapted into three films: Fear Street: 1994, Fear Street: 1978, and Fear Street: 1666.The trilogy received mostly positive reviews, with many viewers comparing its nostalgic tone and supernatural subject to Stranger Things.Is there a connection between Fear Street and Stranger Things?The...
TV SERIES・2 HOURS AGO