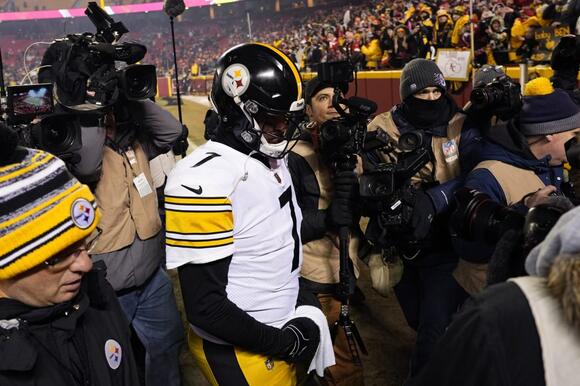 For 18 seasons, Ben Roethlisberger has been the face of the Pittsburgh Steelers’ franchise. He’s earned two Super Bowl titles with the historic organization and will be a first ballot Hall of Famer.

Unfortunately for Big Ben, his career came to an end in a blowout loss to the Kansas City Chiefs in the AFC Wild Card Playoffs Sunday evening.

Pittsburgh took a 7-0 lead on a T.J. Watt scoop and score before seeing Patrick Mahomes lead the Chiefs on five consecutive touchdown-scoring drives to put this game away before the fourth quarter even started.

As for Roethlisberger, he took time to address reporters following the game — pretty much announcing that he has officially retired after 18 seasons. Check it out.

Rumors had persisted that Big Ben would call it quits on a hell of a career at the age of 39. That’s now all but official.

It certainly isn’t the way Big Ben and his Steelers wanted this era to end. However, the simple fact that Roethlisberger’s career was extended a week tells us just how important he is to his head coach and teammates.

Remember, Pittsburgh was on the verge of missing out on the playoffs altogether with the Los Angeles Chargers and Las Vegas Raiders seemingly set to tie in Week 18. That’s when Chargers head coach Brandon Staley had a brain fart of epic proportions , leading to a Raiders win and a playoff appearance for Pittsburgh.

In any event, Big Ben ends his career with some absolutely amazing numbers. Of the 18 seasons he played with Pittsburgh, they didn’t finish with a losing record. All said, Pittsburgh earned 11 playoff appearances under Roethlisberger after making him a first-round pick all the way back in 2004.

Talk about a hell of a career.

I am so tired of people continuing to bring up Ben's past. Soooo many high profile athletes have done and continue to do questionable things. But so do regular people only no one "talks" about them. I know people who have checkered pasts and are good people today. The man is a great quarterback and he's retiring...leave him and his family be.

Class man. Gave his all. Deflected critism well. Deserves a good life now. Served the fans well, even playing hurt numerous times. Salute to you, Ben. A Hall of Famer, for certain.

big Ben gave Pittsburgh everything he had for 18 seasons. he took alot of backlash but the Steelers were still better with him then without him. you can see In his last games he just dont have it like he used to. # good luck in your retirement ben

The NFL is expected to decide whether to suspend Cleveland Browns quarterback Deshaun Watson before the season begins, though there’s
CLEVELAND, OH・1 DAY AGO

There’s been some growing talk that embattled Washington Commanders owner Daniel Snyder could be forced to sell the team as
DENVER, CO・14 HOURS AGO
Sportsnaut

Back on April 9, the NFL world was dealt a terrible tragedy with reports that Dwayne Haskins was killed in
COLUMBUS, OH・1 DAY AGO
Sportsnaut

Nothing gets the people going quite like the Stanley Cup Playoffs. Find out how to live stream every NHL Playoff game here.
NHL・17 HOURS AGO
Sportsnaut

Earlier on Tuesday, a report broke that the NFL Pro Bowl game could be replaced with powers that be believing
NFL・12 HOURS AGO
Sportsnaut

The Indianapolis Colts signed free agent running back Ty’Son Williams on Tuesday, two weeks after the Baltimore Ravens withdrew their
INDIANAPOLIS, IN・20 HOURS AGO
Sportsnaut