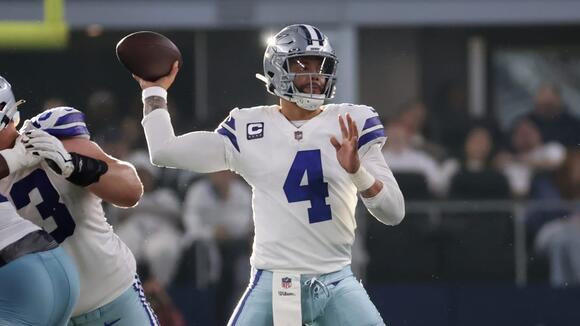 Prescott did not hold back when asked about fans throwing trash at officials after the game, and the football world had plenty to say about it.

Cowboys quarterback Dak Prescott turned a lot of heads Sunday when he offered his support for fans who threw trash at officials as they ran off the field following Dallas's controversial 23-17 loss to the 49ers.

The Cowboys had a chance to drive down the field and win the game in the final minute. With 14 seconds left, no timeouts and the ball on San Francisco's 41-yard line, Prescott ran a quarterback draw to the 24-yard line. After the run, Prescott got up and handed the ball to his center, as the rest of the offense hurried to spike the ball. But by rule, the referee must touch and spot the ball before the next play can begin. As the umpire ran from behind the play to do so, he collided with Prescott and the offensive line, delaying his spotting of the ball. Time ran out before Prescott could get a chance to kill the clock, ending the game.

In his post-game press conference, Prescott was asked about fans throwing trash onto the field as players and officials headed for the locker room. He initially expressed disappointment that fans would throw trash at their own team’s players. When he was told they were throwing debris at the officials, however, he said, "Credit to them then."

Unsurprisingly, the NFL world had a lot of thoughts on Prescott's comments advocating for violence against referees. Check out some of the standouts below.

During the whole game cowboys made crucial mistakes and at the end of the game that was the worst one.

I've been a cowboy fan from when they first started. I've gone through some stuff with my boys. I want to make this perfectly clear. It is NEVER an excuse to attack the officials. NEVER!! It's ok to speak your disappoint but it is NEVER ok to assault an official. Everyone expect them to be perfect. I would like for anyone who is perfect to please raise your hand. Just what I thought.

He hasn’t played in the NFL since 2016.
NFL・2 DAYS AGO
Sports Illustrated

Las Vegas brought the former 49ers QB in for a workout on Wednesday.
LAS VEGAS, NV・18 HOURS AGO

The former Saints quarterback isn't expected to return to NBC in 2022.
NEW ORLEANS, LA・16 HOURS AGO
The Spun

LeBron James has taken to social media to react to the Los Angeles Lakers' head coaching hire. According to multiple reports - which appear to have been confirmed by the Lakers star - the Western Conference franchise is hiring Milwaukee Bucks assistant coach Darvin Ham. LeBron has a three-word reaction...
LOS ANGELES, CA・14 HOURS AGO
Sports Illustrated

The Lakers legend has only appeared on ESPN once this entire NBA season.
LOS ANGELES, CA・2 DAYS AGO
Sports Illustrated

Rice went there with Barkley.
SAN FRANCISCO, CA・1 DAY AGO

He thinks he knows which team Golden State will take on next week.
SAN FRANCISCO, CA・1 DAY AGO
Sports Illustrated

In the wake of the Texas school shooting, Kapler said he won’t participate in the National Anthem until he feels better about the direction of the country.
UVALDE, TX・16 HOURS AGO

In this week's recruiting mailbag, we look at how the altered group of top schools and relationships with top quarterbacks could impact the top wide receiver's decision
KNOXVILLE, TN・1 DAY AGO
Miami Herald

Why Celtics are supremely confident heading to Game 7. And what Heat did to Tatum/Brown

No team in the NBA has been better after a loss in this calendar year than the Celtics.
MIAMI, FL・45 MINUTES AGO
Sports Illustrated

It’s possible Carolina could still strike a deal for the Cleveland quarterback.
CLEVELAND, OH・2 DAYS AGO

The former star running back took his wife’s last name and explained why.
NFL・2 DAYS AGO
Sports Illustrated

The primetime doubleheader scheduled for Oct. 8 could go to the most dramatic rivalry in college football right now.
COLLEGE SPORTS・2 DAYS AGO
Sports Illustrated

The undrafted rookie made a one-handed grab at practice but that wasn’t the most impressive part for the quarterback.
KANSAS CITY, MO・1 DAY AGO
Sports Illustrated

Dallas traded Cooper to the Browns in the offseason.
CLEVELAND, OH・43 MINUTES AGO