By Matt Johnson
Sportsnaut
1 day ago 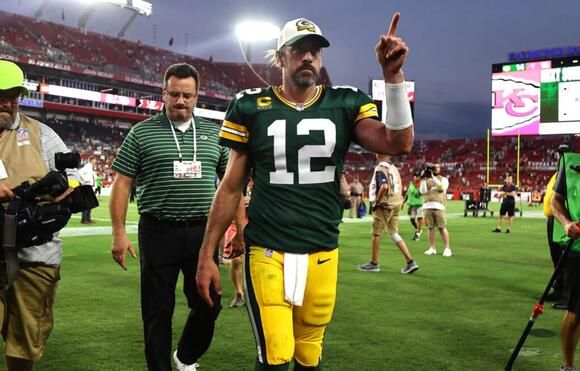 In Week 4 of the Green Bay Packers schedule, the team will look to earn a third win in the season when they face off with Mac Jones and the New England Patriots at home.

All our predictions are based on the Packers keeping and starting these key players:

Davante Adams is gone, creating a massive void at wide receiver. Losing a player who had one of the highest rates of targets in the past two years is a massive blow for the Green Bay Packers offense. It will have an impact on the scoring output and likely is a huge blow to any hopes from Aaron Rodgers of winning a third consecutive NFL MVP award.

There are reasons to take an optimistic angle with this Packers’ offense. The pairing of Aaron Jones and A.J. Dillon might be one of the best running back tandems in the NFL. Expect Green Bay to rely on their rushing attack even more in 2022, with head coach Matt LaFleur finding ways to use it to open up the passing game more.

At wide receiver, the are obvious concerns. Randall Cobb is nothing more than a No. 3 wideout at this point in his career and Allen Lazard is a fringe No. 2, elevated thanks to his blocking ability. Sammy Watkins will make a few plays, but his best days are behind him. As for the rookies, don’t be surprised if Romeo Doubs outperforms Christian Watson in 2022.

There is one reason for excitement about the Green Bay Packers roster. After adding Devonte Wyatt and Quay Walker, Green Bay now boasts one of the most talented defenses in the NFL. This is an elite group, one that is easily the best unit the Packers have fielded in years. It will play an essential role in making up for the Packers’ regression offensively.

Here is a game-by-game preview of the 2022 Green Bay Packers schedule, including predictions for their entire 2022 season.

A 12-5 record will be more than enough for the Packers to win the NFC North and it should give them a solid shot at the No. 2 seed in the NFC. Our projections include a loss to the Lions in Week 18, assuming Green Bay rests many of its starters with another team already locked into the No. 1 seed.

Terry Bradshaw had a notable warning for an NFL quarterback on Sunday afternoon. The legendary Pittsburgh Steelers quarterback turned Fox Sports analyst is warning Jameis Winston. Bradshaw believes that Winston could be at risk of losing his starting job. "Be careful, you might lose your job to Andy Dalton." Winston...
NFL・1 DAY AGO
The Spun

Erin Andrews is once again dominating the sideline with her outfit game. The Fox Sports sideline reporter is on the call for Sunday afternoon's "Game of the Week" between the Buccaneers and the Packers. Andrews is rocking a pretty awesome sun hat. Hey, it's hot in Florida on Sunday afternoon,...
FOOTBALL・1 DAY AGO
The Spun

Michael Irvin looked noticeably different when he appeared on NFL Network earlier today. The Playmaker's trademark eyeglasses were nowhere to be found, leaving some to wonder if he had ditched them. As it turns out, Irvin simply forgot them at his hotel. Fans are having some fun with this information,...
NFL・1 DAY AGO
The Spun

Jameis Winston is battling through major pain. According to reports, the New Orleans Saints quarterback plans on playing, though he's been battling some serious injuries as of late. "Jameis Winston, who is expected to play vs #Panthers, has experienced discomfort from what’s considered a painful injury. Focused on getting healthier...
NEW ORLEANS, LA・1 DAY AGO

Former NFL star Brett Favre has been making headlines for all the wrong reasons as of late. The Hall of Fame quarterback is currently in the middle of a welfare scandal in his home state of Mississippi. Favre has not yet been charged with anything, though it's possible his role...
NFL・2 DAYS AGO
The Spun

Sunday Could Be Major Turning Point For Tom Brady, Gisele

Sunday is expected to be a potential turning point in the marriage of Tom Brady and Gisele. The Tampa Bay Buccaneers quarterback and his supermodel wife have been going through some struggles as of late. Brady, 45, is continuing to play in the National Football League, despite Bundchen wishing he would be more present at home with their family.
TAMPA, FL・2 DAYS AGO
USA TODAY Sports Media Group

The Dolphins came away from Sunday’s early afternoon action by beating the juggernaut Bills (+4.5) — one of the biggest wins in recent franchise memory. They even won despite a hilarious “Butt Punt” that might have played into their favor in the end. But their explanation for a Tua Tagovailoa injury might cloud what they accomplished after finishing a 3-0 start to their season.
NFL・1 DAY AGO
Deseret News

As if the big Sunday Night Football matchup between the San Francisco 49ers and Denver Broncos wasn't hard enough to watch, longtime color commentator Cris Collinsworth didn't make it any easier on the ears. At one point in the broadcast, Collinsworth and Mike Tirico started talking about other results throughout...
SAN FRANCISCO, CA・23 HOURS AGO
The Spun

Last weekend, Tampa Bay Buccaneers quarterback Tom Brady had a minor tantrum on the sideline, tossing his Microsoft Surface tablet and helmet on the sideline. Sideline reporter Erin Andrews was right there for all of the action. She said she loves to see when Brady is fired up on the sideline.
TAMPA, FL・2 DAYS AGO
People

Tom Brady and Gisele Bündchen Have Been Living Apart for 'More Than a Month,' Source Says

"They would like to work things out," a source tells PEOPLE of Tom Brady and Gisele Bündchen Tom Brady and Gisele Bündchen have been living apart for "more than a month," a source tells PEOPLE. The longtime couple have been away from each other for the last six weeks, as Brady, 45, returns to the NFL and Bündchen, 42, is traveling. "Gisele is busy with her own life now, and has spent time away from Tom in Miami and New York," says one insider. A second source...
NFL・10 DAYS AGO
The Spun

There is a lot of buzz around today's Bucs-Packers game in Tampa, in some cases literally. Before the game, television cameras captured a terrifying image: a hive of bees inside one of the goalposts at Raymond James Stadium. We're not sure how long the bees have been there, but there's...
TAMPA, FL・1 DAY AGO

Another "rogue drone" has forced a stoppage in football play, this time during the Seahawks-Falcons game in Seattle.
SEATTLE, WA・1 DAY AGO
The Spun

Despite being linked to jobs like Nebraska and Auburn, Urban Meyer has no plans to coach again. The former Ohio State Buckeyes and Florida Gators head coach announced this week that he's happy working in television and spending more time with his family. Meyer, who was fired less than one...
COLUMBUS, OH・2 DAYS AGO
FanSided

Injury to Buccaneers skill player could end stint in Tampa

Giovani Bernard looked like a great addition to the Buccaneers when the move was initially made, but the constant injuries make his future questionable. No one ever wants to see injuries derail a career. It is one of the harder parts of the NFL and also one of the only certainties; the sport is always trying to take more from the players than they take from it. Unfortunately, these injuries look like they could spell the end of Giovani Bernard’s time in Tampa with the Buccaneers.
TAMPA, FL・1 DAY AGO
The Spun

A lingering knee injury has plagued David Bakhtiari since the second half of the 2020 season. However, all signs point to the All-Pro left tackle returning to the field this Sunday. ESPN's Adam Schefter is reporting that Bakhtiari is expected to make his 2022 season debut this weekend against the...
GREEN BAY, WI・2 DAYS AGO

Veteran wide receiver Cole Beasley has been activated off the Tampa Bay Buccaneers' practice squad roster for Sunday's contest against the Green Bay Packers. Beasley, 33, was a free-agent until he signed with the Bucs' practice squad earlier this week. The NFL world took to Twitter to react to this...
TAMPA, FL・2 DAYS AGO
The Spun

Usually it's hard to keep fans away from the field leading up to an NFL game. But there was something so terrifying on the field at Raymond James Stadium that fans were ready to run away. Prior to today's game between the Tampa Bay Buccaneers and Green Bay Packers in...
TAMPA, FL・1 DAY AGO
The Spun

The Green Bay Packers placed wide receiver Sammy Watkins on the injured reserve, per Dov Kleiman. One of Green Bay’s biggest 2022 concerns is their receiving core. They have plenty of options, but little experience. Watkins was one of the more trusted options at the position for Aaron Rodgers and the Packers.
GREEN BAY, WI・2 DAYS AGO