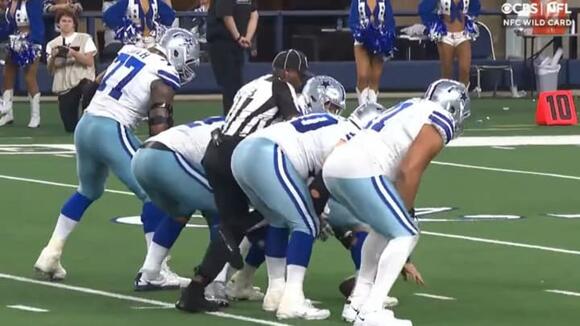 The Dallas Cowboys lost to the San Francisco 49ers in the dumbest way possible Sunday afternoon. The Cowboys were on a late drive in an attempt to steal a last-second win in the Wild Card round, made a terrible play-call, then had an official cost them precious time as they tried to stop the clock. It was freaking wild.

With 14 seconds left, the Cowboys had the ball on San Francisco's 41-yard line trailing 23-17. The 49ers played the classic late-game sideline defense, leaving the middle of the field open. The Cowboys took the bait, and ran a quarterback draw with Dak Prescott. He gained 17 yards and went down at San Francisco's 24-yard line. The problem with that? The clock was running.

The Cowboys lined up to spike the ball, but an official had to set it before they could run a play. As the official ran in to officially line the ball up, he crashed into Prescott and Cowboys center Tyler Biadasz. That cost Dallas at least a second or two as everyone got set. Time expired before the Cowboys could get the snap off.

That's really hilarious and definitely cost Dallas a bit of time. But let's remember the real culprit here: calling a quarterback draw with 14 seconds left and no timeouts. What the hell did they think would happen? This isn't college football where the clock stops after a first down. I've long said the NFL should adopt that rule, but it doesn't currently exist.

This is also on Prescott. Instead of finding an official to give the ball to, he gave it to his center. The official then had to take it from the center and reposition it.

Tony Romo explained that aspect of the play:

If you're going to run a play like that, you have to know what comes next and the Cowboys clearly had no idea what to do.

What an awful, yet hilarious, way to end the season.

The headline is deceiving, it should read Dak fails to understand game of football and allows his center to spot ball rather than official, costing the Cowboys the game.

lmao noooo. Dak cost them the game by taking off running down the middle of the field with under 10 seconds left WITH NO TIMEOUTS LEFT. Bonehead play.

Deshaun Watson's civil cases pushed back until 2023. Which is bad news for the Cleveland Browns.
CLEVELAND, OH・7 DAYS AGO
The Big Lead

ESPN's Monday Night Football broadcast will begin a brand-new chapter this upcoming season after signing Joe Buck and Troy Aikman to become the network's No. 1
SEATTLE, WA・5 DAYS AGO
The Big Lead

The former star running back took his wife’s last name and explained why.
NFL・17 MINUTES AGO

Laura Rutledge on NFL Live Success and the 2022 Season

Ahead of the 2020 NFL season, ESPN decided to make changes to its marquee NFL analysis studio show, NFL Live . The new and rebranded iteration featured Laura Rutledge as the host alongside Dan Orlovsky, Marcus Spears, and Mina Kimes . Various members of the network's roster make regular appearances, but the foundation of the show consists of those four individuals. ESPN made a bet that their collective football passion and knowledge would make for a a high-quality viewing experience-- an important bet because the NFL, in every way, is king.
NFL・1 DAY AGO
The Big Lead

Will Payton Pritchard Be Suspended For The Dirty Play That Injured Jimmy Butler?

Grant Williams and Celtics coach Ime Udoka got into it on Boston's bench.
BOSTON, MA・7 DAYS AGO

John Daly has a long and sweaty history at Southern Hills, site of this year's PGA Championship. An early-morning tee time means he won't require a dozen-plus Diet Cokes today. It also means he may enjoy the view from atop the leaderboard for awhile. Daly, who won this major back in 1991, stuck an approach shot on No. 1 within five feet of the hole and kicked it in to get under par and out in front. He did this while wearing resplendent colorful pants featuring dozens of skulls. If you can't get a kick out of this, then you simply don't like sports. And people living their best lives.
GOLF・6 DAYS AGO
The Big Lead

Charles Barkley and the Inside the NBA crew addressed the ongoing war of words/tweets/Instagram stories they've had with Kevin Durant. Specifically Barkley went at Durant for singling him out for his Houston Rockets days. Here's the segment:. Barkley is correct that he could bring up Durant's time with the Oklahoma...
NBA・28 DAYS AGO
The Big Lead

Luka Doncic had a great first half against the Golden State Warriors in Game 2 of the Western Conference Finals. Doncic scored 24 points as the Dallas Mavericks took a 72-58 lead into halftime. And on the way to the locker room he got into it with a fan. It...
DALLAS, TX・4 DAYS AGO
The Big Lead

The signs all point one way.
NBA・8 DAYS AGO
The Big Lead

VIDEO: Taylor Swift talks about being canceled at NYU commencement.
CELEBRITIES・6 DAYS AGO
The Big Lead