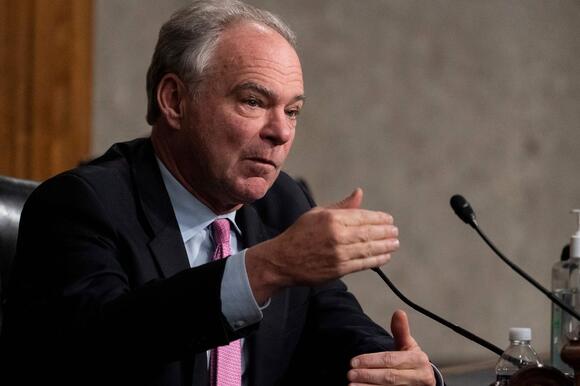 President Joe Biden’s nearly $2 trillion “Build Back Better” plan is “dead,” but one top Democrat predicted Sunday that the core of the legislation will eventually be approved.

“You’re right that it’s dead, the most recent version of it is not going to happen,” Kaine told reporter Margaret Brennan. “But if you look at the core of the bill, I think the core is education and workforce and things like reduced childcare and education expenses, workforce training, and then support for the workforce in areas like health care.”

Chances for passage of the Build Back Better plan were scuttled after Sen. Joe Manchin, D-W.Va., said in December that he would not support it. Another Democrat, Sen. Kyrsten Sinema of Arizona, also had expressed opposition to parts of the bill.

Last week, chief White House economist Cecilia Rouse said Biden would now focus on getting key components of the bill passed. “The president will still be looking for ways to make them happen — maybe not in that particular bow, but these are important investments that we need to make if we’re going to continue growth,” she said Wednesday .

“I think we have to go into that Build Back Better bill and do the core provisions that reduce costs for Americans in these key areas,” Kaine told CBS News. “If we do that will speak to their inflation concern, we will help people out in every Zip code in this country. I think we’ve got to do that.”

What about inflation, high food cost, energy cost, the boarder? Stop working on your agenda - Liberal Master Plan - and work the peoples agenda. I have emailed this guy, my representative and all I get back is form letters that aren’t even on subjects. These folks don’t represent us they represent their Liberal Master Plan, that’s all they care about. 😞

Have a question about your own retirement savings? Email us at HelpMeRetire@marketwatch.com.
REAL ESTATE・1 DAY AGO
MarketWatch

Have a question about your own retirement savings? Email us at HelpMeRetire@marketwatch.com
BUSINESS・1 DAY AGO
MarketWatch

'I don’t feel that we can or should afford to pay 45% of our take home income towards housing when we have a baby on the way.'
LOS ANGELES, CA・1 DAY AGO
Newsweek

The scant polling out of the western state shows the incumbent Republican trailing her top challenger by double digits.
WYOMING STATE・1 DAY AGO

Far-right favorite Kandiss Taylor received just 3.4 percent of the vote in Georgia’s GOP primary for governor on Tuesday, less than one-twentieth of current Gov. Brian Kemp’s 73.7 percent of the vote. But that isn’t stopping Taylor from refusing to concede and claiming the election was “rigged.”
GEORGIA STATE・1 DAY AGO
Fox News

Former Trump adviser Stephen Miller said President Biden does not have the "presence of mind" to control his own government on Friday's "Jesse Watters Primetime." He called for a "thunderous repudiation" in the November midterm elections to thwart "permanent and irrevocable" damage. STEPHEN MILLER: It's been the most disastrous first...
PRESIDENTIAL ELECTION・1 DAY AGO
Fox News

The grief-stricken husband of a fourth-grade teacher killed in the Uvalde, Texas, school massacre died of a heart attack just two days after the mass shooting, family said on Thursday. Joe Garcia died in the aftermath of the Robb Elementary School shooting that killed 19 children and two teachers —...
UVALDE, TX・2 DAYS AGO

5 best cooling comforters, according to sleep coaches and professional reviewers

We asked sleep coaches and experts to share their favorite cooling comforters and duvets.
SCIENCE・31 MINUTES AGO
MarketWatch

Money and investing stories popular with MarketWatch readers over the past week.
MARKETS・36 MINUTES AGO