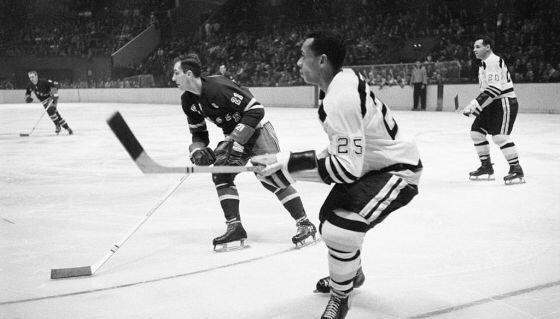 L egendary hockey player Willie O’Ree —the first Black player in the NHL—played a transformative role in shaping the sport and he will be honored for his contributions in a major way. The 86-year-old trailblazer will have his jersey retired by the Boston Bruins, the Denver Channel reported.

O’Ree made his debut with the Boston Bruins in 1958. Over the course of his career—which lasted for 24 seasons—he encountered harrowing experiences due to the color of his skin. There were several incidents when unruly fans attempted to attack him. Despite enduring those racist encounters, O’Ree continued to compete because he knew his presence on the ice would break barriers and open doors for Black athletes following in his footsteps. “It showed me that I could change things if I tried,” O’Ree wrote in his memoir Willie: The Game-Changing Story of the NHL’s First Black Player . “My parents worried that I’d bring trouble onto myself because of color, but I figured trouble was happening because of color already. I wasn’t going to let it stop me.” Following his retirement, he continued his advocacy for diversity within the sport by leading youth programs that introduced hockey to children from underrepresented groups.

The jersey retirement ceremony is slated to take place on January 18; the same day that O’Ree broke the color barrier 64 years ago. He will be the 12th player to have his jersey retired by the Bruins.

News about O’Ree’s jersey retirement comes as efforts to award him with a Congressional Gold Medal have moved forward. It also comes as the NHL’s Black Hockey History Tour —a mobile museum that highlights the stories of Black hockey trailblazers—is traveling to different cities throughout the country. In 2018, O’Ree was inducted into the Hockey Hall of Fame.

The Miami Heat are attempting to take a 3-1 series lead on the road in Game 4 of their Eastern
BOSTON, MA・2 HOURS AGO
NewsOne

NBA star Stephen Curry has completed his studies at Davidson College, 13 years after being drafted into the NBA.
NBA・1 DAY AGO