By Andrew Buller-Russ
Sportsnaut
1 day ago 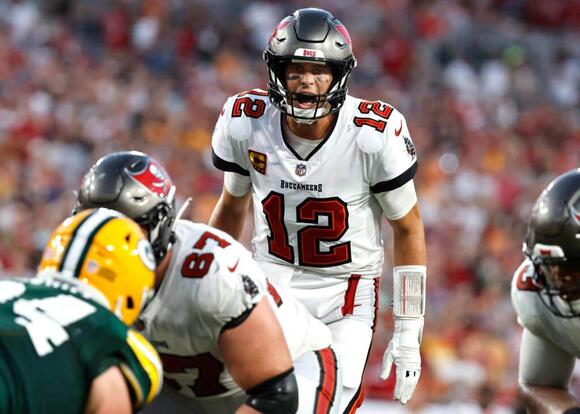 In Week 4 of the Tampa Bay Buccaneers schedule, Patrick Mahomes and the Kansas City Chiefs are in town looking to hand the Bucs a second straight loss at home.

All eyes were on Tom Brady this offseason, and once he announced his return for the 2022 season, the Buccaneers quickly became a popular Super Bowl pick. Ali Marpet’s retirement is noteworthy, but adding Shaq Mason helps offset his loss.

Brady’s protection will be as sharp as ever, the receiving corps is one of the best in the league, and Byron Leftwich taking full control of the offense should lead to wicked passing numbers once again.

General manager Jason Licht has made some moves along the defensive line, with veterans Ndamukong Suh and Jason Pierre-Paul out the door, replaced by younger talent such as Logan Hall and Joe Tryon-Shoyinka. These personnel changes could be one of the bigger factors to their success or failures this season.

Returning is one of the best linebacking corps in football, with Devin White and Lavonte David leading the way, but the unproven front could place more pressure on the secondary, in which Antoine Winfield Jr. is a top talent and is now joined by two-time Super Bowl champ Logan Ryan.

Once again, the Buccaneers have a strong roster from head to toe, it’s just about staying healthy.

Here you can find all of the information you need on the 2022 Tampa Bay Buccaneers schedule. We’ll provide game predictions, betting info and more throughout the season.

After finishing 13-4 a season ago, aside from a head coaching change, the Bucs return most of their key contributors. Even at 45, TB12 figures to return to his position as one of the very best quarterbacks in football. His supporting cast has enough talent to hold their own, preventing Brady from having to do all the work.

As long as the team can be healthier than they were down the stretch last season when they were dealing with a depleted pass-catching core in addition to several vet defenders missing time, the Buccaneers should be able to do more damage in the playoffs heading into the 2022-23 season.

Terry Bradshaw had a notable warning for an NFL quarterback on Sunday afternoon. The legendary Pittsburgh Steelers quarterback turned Fox Sports analyst is warning Jameis Winston. Bradshaw believes that Winston could be at risk of losing his starting job. "Be careful, you might lose your job to Andy Dalton." Winston...
NFL・1 DAY AGO
The Spun

Erin Andrews is once again dominating the sideline with her outfit game. The Fox Sports sideline reporter is on the call for Sunday afternoon's "Game of the Week" between the Buccaneers and the Packers. Andrews is rocking a pretty awesome sun hat. Hey, it's hot in Florida on Sunday afternoon,...
FOOTBALL・1 DAY AGO
USA TODAY Sports Media Group

Ever since joining the CBS Sports booth for NFL games in 2017, Tony Romo has offered a unique perspective as a former quarterback who has first-hand familiarity with many of the teams he’s watching. Fans loved it as he would call out plays before they happened. But he can also call out arguments as they are happening.
KANSAS CITY, MO・1 DAY AGO
The Spun

Former NFL running back O.J. Simpson is calling for a starting quarterback benching. Simpson, who starred in the NFL before being accused - and later acquitted - of murdering his ex-wife, Nicole Brown Simpson, and her friend, Ron Goldman, took to social media this week. The former NFL star believes...
PITTSBURGH, PA・1 DAY AGO

Jameis Winston is battling through major pain. According to reports, the New Orleans Saints quarterback plans on playing, though he's been battling some serious injuries as of late. "Jameis Winston, who is expected to play vs #Panthers, has experienced discomfort from what’s considered a painful injury. Focused on getting healthier...
NEW ORLEANS, LA・1 DAY AGO
Deseret News

What are Russell Wilson’s former teammates saying about him?

Members of the Seahawks Super Bowl XLVIII winning team have criticized their former quarterback.
DENVER, CO・2 DAYS AGO
The Spun

Sunday Could Be Major Turning Point For Tom Brady, Gisele

Sunday is expected to be a potential turning point in the marriage of Tom Brady and Gisele. The Tampa Bay Buccaneers quarterback and his supermodel wife have been going through some struggles as of late. Brady, 45, is continuing to play in the National Football League, despite Bundchen wishing he would be more present at home with their family.
TAMPA, FL・1 DAY AGO
The Big Lead

Raiders Fans Brawl: One Guy Beat Up Two Men and a Woman

The Cowboys have never been shy about inviting controversy into their locker room. Least of all at QB. Even the Hall of Fame QB, Troy Aikman, struggled to win over the Dallas fan base at the beginning of his career. After Dak signed a massive extension last year, most fans thought his job was secure, but despite Prescott making over 40 million dollars this season, Jerry Jones proclaimed that there is a chance Cooper Rush may win the starting job. Jerry went so far that he even said he ‘welcomed’ the QB controversy if Rush continues to play well.
DALLAS, TX・2 DAYS AGO
Deseret News

Cleveland Browns defensive end Myles Garrett and a passenger were taken to a hospital with non-life-threatening injuries Monday after a
BEREA, OH・3 HOURS AGO
The Spun

Former NFL star Brett Favre has been making headlines for all the wrong reasons as of late. The Hall of Fame quarterback is currently in the middle of a welfare scandal in his home state of Mississippi. Favre has not yet been charged with anything, though it's possible his role...
NFL・1 DAY AGO

Last weekend, Tampa Bay Buccaneers quarterback Tom Brady had a minor tantrum on the sideline, tossing his Microsoft Surface tablet and helmet on the sideline. Sideline reporter Erin Andrews was right there for all of the action. She said she loves to see when Brady is fired up on the sideline.
TAMPA, FL・2 DAYS AGO
USA TODAY Sports Media Group

The Dolphins came away from Sunday’s early afternoon action by beating the juggernaut Bills (+4.5) — one of the biggest wins in recent franchise memory. They even won despite a hilarious “Butt Punt” that might have played into their favor in the end. But their explanation for a Tua Tagovailoa injury might cloud what they accomplished after finishing a 3-0 start to their season.
NFL・1 DAY AGO
The Spun

Hall of Fame quarterback and NFL analyst Terry Bradshaw has seen a lot of quarterbacks come and go in his five decades of football. But today he had a warning for one quarterback playing close to home. On Sunday's edition of FOX NFL Sunday, Bradshaw had a message for New...
NFL・1 DAY AGO
ClutchPoints

The New Orleans Saints enter Week 3 with a 1-1 record as they look to get back to winning ways against the Carolina Panthers. At this point, however, the Saints seem to be in danger of having to sit both Jameis Winston and Alvin Kamara due to their respective injuries.
NEW ORLEANS, LA・2 DAYS AGO

Aaron Rodgers and the Green Bay Packers are at Raymond James Stadium for today's huge NFC matchup with the Tampa Bay Buccaneers. As usual, Rodgers was dressed for the occasion. Ahead of the late-afternoon game against the Bucs, the Packers showed some photos of Rodgers making his entrance via the...
GREEN BAY, WI・1 DAY AGO
USA TODAY Sports Media Group

The way that the first half ended in the Kansas City Chiefs’ Week 3 game against the Indianapolis Colts seems to have caused some frustration between the team’s star quarterback and offensive coordinator. Patrick Mahomes and the Chiefs received the ball with 44 seconds remaining until halftime at...
KANSAS CITY, MO・1 DAY AGO
The Spun

Despite being linked to jobs like Nebraska and Auburn, Urban Meyer has no plans to coach again. The former Ohio State Buckeyes and Florida Gators head coach announced this week that he's happy working in television and spending more time with his family. Meyer, who was fired less than one...
COLUMBUS, OH・1 DAY AGO