By Andrew Buller-Russ
Sportsnaut
13 hours ago 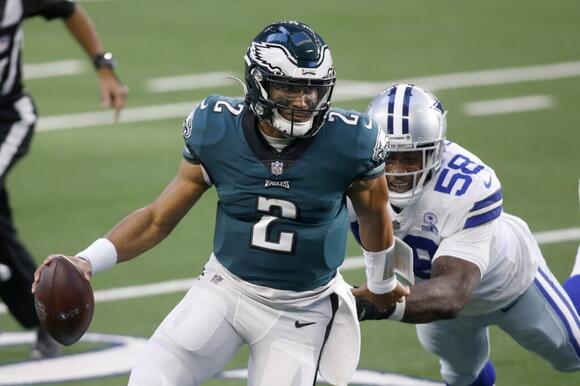 It might be a wild concept, but somehow Howie Roseman took a playoff roster and made it much better during the 2022 offseason. He did this by having tons of capital to use, thanks to some wise trades bringing in extra draft picks. Having Jalen Hurts on a rookie-scale contract also surely helped matters.

Entering the season, the Eagles have a strong receiving corps, which feels strange to say, but it’s true. A.J. Brown, DeVonta Smith and Dallas Goedert are all key contributors who can help Hurts and the offense take the next step.

But it’s not just offensive additions. They’ve also added Haason Reddick and first-round pick Jordan Davis to their front seven which should only make the secondary more impactful. Speaking of the defensive backs, James Bradberry joins Darius Slay to form a playmaking duo on the boundaries.

Playing in the NFC East where nothing is guaranteed from year to year, the Eagles won’t be able to stroll back to the playoffs, it’s gonna be a fight, but they appear more prepared than ever for the battles ahead. It all comes down to Hurts and the health of the rest of the roster.

Here, you can find all of the information you need on the 2022 Philadelphia Eagles schedule. We’ll provide game predictions, betting info and more throughout the season.

It’s all about the inner-division battles in the NFC East. Depending on how some of the contenders from last season carry over, the Eagles could find themselves with a favorable schedule, yet if they can’t take care of business against their rivals, it won’t matter.

As it stands, the Eagles may be one of the toughest teams to project. How much better will this offense get with a bolstered pass-catching corps? That’s a major factor heading into 2022.

Is Jonathan Gannon’s defense capable of getting even better? If so, the Eagles could have a top-15 offense in combination with a top-15 defensive unit. That’s a playoff team, but now they need to put the paper plans into action and see what the results are.

Add former Eagles and Washington quarterback Donovan McNabb to the list of those taking a shot at current Commanders quarterback Carson Wentz. McNabb, who spent 11 seasons with the Eagles, led the franchise to multiple NFC East titles and a trip to the Super Bowl before he was traded to Washington in 2011.
WASHINGTON, DC・1 DAY AGO
The Big Lead

Patrick Mahomes, Eric Bieniemy Have to Be Separated by Andy Reid After Sideline Argument

Another "rogue drone" has forced a stoppage in football play, this time during the Seahawks-Falcons game in Seattle.
SEATTLE, WA・5 HOURS AGO

The Philadelphia Eagles continued their winning ways in Week 3, as they cruised to a 24-8 victory against the Washington Commanders. As was the case in the Eagles’ opening two games of the season, quarterback Jalen Hurts rose to the occasion for the current NFC East leaders, as he recorded 340 passing yards and three passing touchdowns in the contest.
PHILADELPHIA, PA・6 HOURS AGO
Sportsnaut

Earlier on Sunday, ESPN’s Adam Schefter reported that the Washington Commanders had agreed to a deal in principle that would’ve
WASHINGTON, DC・3 HOURS AGO
ClutchPoints

The Commanders host the undefeated Eagles on Saturday afternoon! It’s time to continue our NFL odds series with an Eagles-Commanders prediction and pick. Fly Eagles Fly! The Philadelphia Eagles are one of three (2-0) teams in the NFC. They are coming off of two well-played games where they scored a ton of points. Philadelphia is favored on the road here and they have a great chance to stay undefeated with an easy schedule ahead. The Commanders are coming off a loss to the Detroit Lions after taking down the Jacksonville Jaguars in Week 1. Carson Wentz will get to face his former team where he helped lead them to a Super Bowl back in 2018. This certainly isn’t one of the more exciting games for Week 3 but it’s one that can turn into a dog fight.
PHILADELPHIA, PA・1 DAY AGO
Sportsnaut

Dallas Cowboys owner Jerry Jones is no stranger to creating headlines with his comments in the media. After one of
DALLAS, TX・2 DAYS AGO

Well, the NFL won’t like seeing this footage. Earlier this week, the league sent a memo to all 32 teams,
NFL・8 HOURS AGO
Sportsnaut

For the entirety of the Sean McDermott/Brandon Beane era, the injury bug has rarely hit this Buffalo Bills team. Call
NFL・2 DAYS AGO
Sportsnaut

Even before the season began, many regarded the Buffalo Bills as one of, if not the best team in football.
NFL・1 DAY AGO

NBC Sunday Night Football is back for its 17th season in 2022. While the broadcast returns to the Peacock network,
NFL・8 HOURS AGO
Sportsnaut

Melvin Gordon ran for a touchdown, Russell Wilson was 20-for-33 passing for 184 yards and the host Denver Broncos beat
DENVER, CO・1 HOUR AGO
Sportsnaut Silver & Black

Bookmark. Save. Favorite. Do your thing. This is the one-stop shop for everything NFL schedule-related heading into the 2022 season.
NFL・3 HOURS AGO

Week 3 inactives for Commanders vs. Eagles

The Washington Commanders released their inactive list ahead of Sunday’s NFC East clash against the Philadelphia Eagles, and it could mean more trouble for the defense. Defensive end James Smith-Williams, who starts in place of the injured Chase Young, is out with an abdomen injury. Starting cornerback William Jackson III, who was added to the injury report Saturday, is out with a back injury.
PHILADELPHIA, PA・13 HOURS AGO
The Spun

Congratulations are in order for Dianna Russini and her family on Sunday morning. The longtime ESPN NFL insider announced some big news on Sunday morning, revealing that she's pregnant live on "Sunday NFL Countdown." Russini and her husband are expecting their second child. It was a special moment on ESPN's...
NFL・13 HOURS AGO
Sportsnaut Silver & Black

Sunday’s NFL Week 3 action is coming to a close and every weekend keeps getting better. On an afternoon of
NFL・5 HOURS AGO