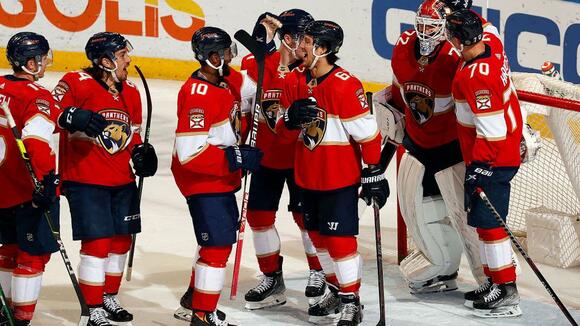 SUNRISE (CBSMiami) – As the Panthers begin a new week, it’s the same old story. The Cats are the best team in hockey. And the team doesn’t just beat opponents, they dominate.

Florida is on the best offensive run over the last eight games the NHL has seen in more than a quarter century.

Overall, the Panthers are 8-0-1 in their last nine games and are outscoring opponents by more than double.

Now, the Cats hit the road.

If you have been to a Panthers game the last few weeks, you heard the chant. If you watched games, you heard it on the broadcast. The franchise record for goals in a game is 10, set back in 1997 at Miami Arena. This year’s team is scoring so many goals that the fans are pushing for a new record. During this nine-game point streak, the Panthers have come close, scoring nine goals twice. They scored 16 goals on consecutive days the past two games. The fans are having fun at FLA Live Arena as the chants start once the Panthers get to about four goals.

The Panthers are nearly unbeatable in their own building. Opponents game plan to slow down the Cats’ prolific offense, but no team is able to do so. Fueled by an enthusiastic crowd, some celebrity appearances and a balanced attack, they are an incredible 21-3 at home this season and score goals at will.

Jonathan Huberdeau has taken his overall game to a new level. He enters the week tied for second in the league in scoring, first in assists, first in completed passes to teammates in the slot and top 11th in takeaways. All that while mostly playing less than other players that have put up similar numbers. His determination, will to win and toughness has been added to his offensive talent that has always been there. Huberdeau has emerged as one of the top overall players in the league along with his long time teammate Barkov.

Usually when a team does what the Panthers are doing this season it is carried by a few elite players. And yes, Jonathan Huberdeau is an MVP candidate and Aleksander Barkov, Aaron Ekblad, MacKenzie Weegar and goalie Sergei Bobrovsky are playing their best hockey. But this team is so deep that there are countless other players having their best seasons. Carter Verhaeghe, Sam Bennett, Anthony Duclair and Gustav Forsling come to mind. Each of these players were great acquisitions by general manager Bill Zito and all have fit in perfectly in South Florida.

An extended road trip begins in Calgary. It will take the Panthers through Western Canada and they will also get their first look at the new arena in Seattle. Thursday’s game in Edmonton could feature the NHL’s top three scorers. The Panthers return home January 27 versus Vegas.

Local businesses and fans credit the Lightning, among other things, for Tampa's rapid growth.
TAMPA, FL・31 MINUTES AGO
KOLR10 News

SPRINGFIELD, Mo–Girls high school soccer district playoffs as well Tuesday night. Class 4, District 5, Kickapoo hosting Republic. The Chiefs took a six game winning streak into this semifinal action. And it’s 1-0 Chiefs in the first half, when Kickapoo’s first shot is stopped, but Sabrina Jones is there to put in the rebound, it’s […]
SPRINGFIELD, MO・23 MINUTES AGO