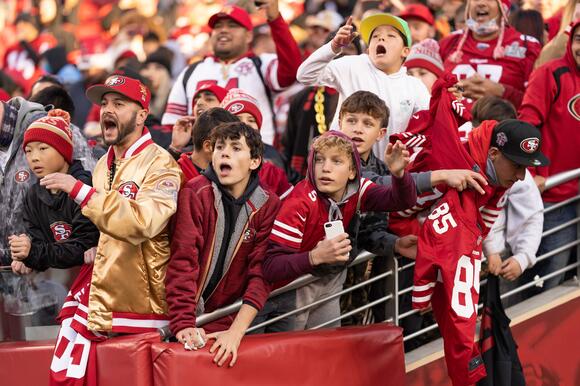 Think people are excited to watch the reprisal of the 49ers-Cowboys rivalry?

A couple hours before Sunday’s 1:30 PT kick off at Jerry’s World in Arlington, Texas, thousands of fans with standing-room only tickets stormed through the doors to get the best spots. Jon Machota of The Athletic shared this wild video of fans bursting through the gates and into the stadium.

What an absolute free-for-all.

Earlier this week, Cowboys owner Jerry Jones guaranteed that 49ers fans wouldn’t take over AT&T Stadium Sunday, but there sure is a lot of red running around in Texas. The Faithful travel well. Last week, the wife of Los Angeles Rams quarterback Matt Stafford was shocked at the amount of 49ers fans at SoFi stadium.

From the early videos coming out of Arlington, it appears the 49ers will be well represented once again Sunday. 105.3 The Fan's Bobby Belt shared this video about 90 minutes before kickoff.

It’s been 27 years since these two teams last met in the playoffs and the stage is set for another epic showdown.

Buck, Aikman excited about 'starting over' with ESPN

It's been two months since Joe Buck jumped from Fox to ESPN. It wasn’t until Monday that the gravity of moving into the “Monday Night Football” booth hit him. Buck and Troy Aikman made their first trips to ESPN headquarters in Bristol, Connecticut, to meet with executives and future co-workers who are preparing for the upcoming season.
BRISTOL, CT・1 HOUR AGO
95.7 The Game

Did the Warriors catch a break with Mavericks matchup in Western Conference Finals?

95.7 The Game’s “Willard & Dibs” debated the pros and cons of the Warriors matching up with the Mavericks instead of the Suns in the Western Conference Finals.
SAN FRANCISCO, CA・5 HOURS AGO
KTSM

DALLAS (CBSDFW.COM) - Dallas was buzzing Monday with Mavs fever many fans haven't felt in a long time. "It's been 11 years now since we really had that epic title run, and the whole city has been waiting. That's over a decade," said fan Alex Hood. "We've had some brief moments of success, but ultimately we were let down. But now this is different." When Dallas teams win, so does the city. Metro Tickets in Dallas, which is now selling tickets for the Western Conference Finals - had a busy morning. "The demand's been very good. very good to us," said Doug White....
DALLAS, TX・1 HOUR AGO

After three seasons as a backup quarterback with Clemson, Taisun Phommachanh announced his intention to stay in the Atlantic Coast
CLEMSON, SC・55 MINUTES AGO