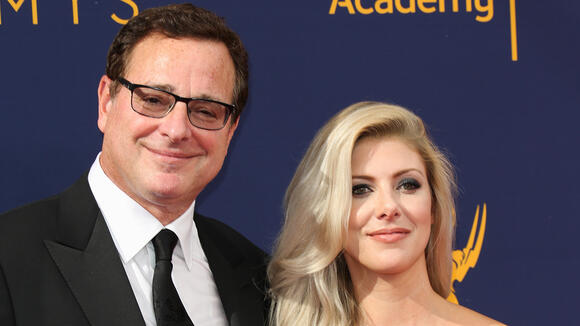 Kelly Rizzo took to Instagram on Saturday to pay tribute to her late husband Bob Saget shortly after he was laid to rest.

“My sweet husband,” Rizzo, 42, began in a lengthy caption alongside a photograph of herself with Saget. “After much reflection this week, I’m trying, really trying, to not think I was robbed of time. But instead to think: How lucky was I that I got to be the one to be married to THE MOST INCREDIBLE MAN ON EARTH.”

The Full House star and TV personality were married in 2018 in Santa Monica. At age 65, Saget died last Sunday in a hotel room in Orlando, Florida. A cause of death has yet to be determined.

Saget was laid to rest on Friday in an intimate service at Mount Sinai Memorial Park and Mortuaries. Among those in attendance were fellow Full House co-stars John Stamos, Lori Loughlin, Dave Coulier and Mary Kate and Ashley Olsen.

“I was the one who got to go on this crazy ride with him and be in his life these last 6 years,” Rizzo continued in her social media post. “We had that time to make each other the happiest we’d ever been and change each other’s lives forever. I got to be the one to love him and cherish him. He deserves all the love. Every ounce of it. Because that’s how amazing Bob was. He was love.”

Rizzo called Saget “a force”  and a “special man.” She aims to continue sharing “how amazing he was with the world,” and raise awareness of organizations important to him, such as the Scleroderma Research Foundation.

“Honey, I love you more than anything, forever.”

Trevor Noah Pays Tribute to Grandmother “Gogo”: “Every Moment Spent With Her Felt Like a Magical Journey”

Trevor Noah is paying tribute to his grandmother Frances “Gogo” Noah, who died at the age of 95 and was laid to rest on Thursday. The Daily Show host, who frequently spoke about his grandmother on the show and once featured her in a segment discussing her experience living under apartheid in South Africa, began his remembrance post with one of her jokes: “How can I smile for a photo when I don’t have teeth?”More from The Hollywood ReporterBiden Roasts Trump, GOP and Himself at White House Correspondents' DinnerMSNBC Films Acquires Trevor Noah Docuseries 'The Tipping Point'Jimmy Kimmel Rips Fox Over...
CELEBRITIES・3 DAYS AGO
The Hollywood Reporter

Actor and cannabis legalization activist Woody Harrelson opened a new business in West Hollywood, California, on Friday, May 13: a legal cannabis dispensary that will also include a consumption lounge located in a backyard garden. Harrelson’s new venture, The Woods, debuted with a ribbon-cutting ceremony attended by the mayor of West Hollywood, Lauren Meister and the head of the city’s chamber of commerce, Genevieve Morrill. “Hopefully we’ve added more beauty and more good times here. Hopefully, we can make the West Hollywood Citizens a little bit higher,” said Harrelson to a crowd assembled outside The Woods, where at least one onlooker...
WEST HOLLYWOOD, CA・1 DAY AGO
The Hollywood Reporter

“Luck is different all around the world,” explains a black cat named Bob, voiced by Simon Pegg, in the opening seconds of Apple Original Films and Skydance Animation’s new teaser trailer for Luck. Bob then bounces and strolls through the confines of the Land of Luck, which is buzzing with leprechauns, bunnies, bears, pigs and other pint-sized creatures: “We work behind the scenes to create those wee lucky and unlucky moments that make up your everyday life.” Bob then declares that no human has ever stepped foot inside, “and, with a little bit of luck, they never will.” Twist! Just then, a...
MOVIES・3 DAYS AGO
Hello Magazine

Robin Roberts got emotional as she opened up about her relationship with partner Amber Laign, especially in the midst of a challenging health battle. The Good Morning America star made an appearance on The Ellen DeGeneres Show to promote her new book, Brighter By the Day. VIDEO: Robin Roberts enjoys...
CELEBRITIES・20 DAYS AGO

Laughter erupted in courtroom after Johnny Depp said he doesn’t watch his own movies and couldn’t recall the question he was asked. “I don’t watch them. I feel better not watching them. What was the question again?” Mr Depp said to laughter from the room. Johnny Depp trial – latest updates“Order in the court, or I will have you removed,” Judge Azcarate said. “Understood? Thank you.”The defamation trial between Mr Depp and Amber Heard began on Monday 11 April in Fairfax, Virginia following Mr Depp’s lawsuit against his ex-wife in March 2019. Mr Depp is arguing that she defamed him...
CELEBRITIES・20 DAYS AGO
Outsider.com

On Monday (April 25th), long-time “Wheel of Fortune” co-host Vanna White took to her Instagram account to announce her cat Stella passed away. The feline was 16 years old. “My sweet Stella has gone to kitty heaven,” Vanna White declared in the social media post, which features a snapshot of her kissing the cat. “I miss her so much and will cherish the special memories of the 16 years we had together.”
PETS・20 DAYS AGO
OK! Magazine

Ryan Seacrest is weighing in on the ongoing court battle between the Kardashian-Jenner family and Blac Chyna.According to a new report from Radar, the TV producer made some bombshell claims in his deposition, which the famous family is trying to get blocked from the jury. As reported by the outlet, Seacrest — who is scheduled to take the stand in the trial — shockingly revealed in his deposition that he wanted Chyna's show with Rob Kardashian, Rob & Chyna, to move forward, despite the Kardashian-Jenner squad's claim that there was fear over Rob's safety as a result of the exes'...
CELEBRITIES・19 DAYS AGO
The US Sun

GENERAL Hospital revealed a major character change is coming to the show this week as one of its stars battles health issues. There are often comings and goings happenings on soaps, and the latest cast switch-up involves longtime cast member Nancy Lee Grahn. Nancy, who turns 66 on Thursday, has...
CELEBRITIES・20 DAYS AGO

The Today Show stars, including Hoda Kotb, Savannah Guthrie, and Craig Melvin, are reeling from the death of a beloved fellow Today host, one whose hiring onto the show made history at NBC studios. The co-hosts took a moment out of Monday morning's show to honor the legacy of Jim...
CELEBRITIES・21 DAYS AGO
Popculture

Netflix has canceled another one of its major shows, with this one getting the ax after only two seasons. Variety reports that hit sci-fi drama Raising Dion has been dropped by the streamer, following its recent season debut. The news seems to have been revealed by series star Sammi Haney, who shared the news with fans on Instagram. "Sad to say that Raising Dion is CANCELED [sic] Thank you for all of the amazing support we got from all of our wonderful fans!" Haney wrote, in part. "Season 2 was a success, equal to Season 1, even if just looking at how many people watched all of it and wanted a season 3!"
TV SERIES・19 DAYS AGO
Outsider.com

One of the greatest classic TV sitcoms is definitely Seinfeld and the cast had amazing rhythm and timing together except for this actress. The work between Jerry Seinfeld, Julia Louis-Dreyfus, Michael Richards, and Jason Alexander is incredible. Yet there was one actress who was a recurring character that simply did not work out too well. Alexander played George Costanza and his fiance’ Susan was played by Heidi Swedberg. To say that the chemistry wasn’t there would be an understatement.
CELEBRITIES・1 DAY AGO
People

Paulina Gretzky walked down the aisle in Vera Wang!. The bride shimmered during her wedding with pro golfer Dustin Johnson on Saturday at Tennessee's Blackberry Farm. Gretzky showed off the stunning look on Instagram Monday in a photo of the newlyweds kissing. "4/23/22♥," she simply captioned the post. For...
BEAUTY & FASHION・19 DAYS AGO

Too $hort has worked with a score of legendary producers throughout his almost 40-year career, from Jermaine Dupri and Lil Jon to Daz Dillinger and DJ Pooh. But one big-name beatsmith he passed up the opportunity to work with was Kanye West. During a recent interview with VladTV, the Bay...
CELEBRITIES・20 DAYS AGO
Outsider.com

Spring is always a big time for engagements and weddings, and two beloved internet personalities are the latest to update their relationship status. On April 18, Rachel "Seltzer" Quirico revealed she and longtime boyfriend Trevor "TorcH" Housten were tying the knot after 17 years together. Both of them are beloved figures in the esports world, with Seltzer notably starring in the Syfy reality show WCG Ultimate Gamer. She's also hosted numerous esports tournaments and events for TV/streaming outlets; she also made a recent appearance on G4 TV's Boosted.
RELATIONSHIP ADVICE・20 DAYS AGO
Complex

It seems Coi Leray is getting fed up with the drama. She and her father, Benzino, have not seen eye to eye for quite some time, and despite numerous attempts to mend their relationship, they keep ending up back at square one. Yesterday, 50 Cent, whose been feuding with Benzino...
CELEBRITIES・21 DAYS AGO
OK! Magazine

Two years later and Stassi Schroeder is finally opening up about her traumatic firing from Vanderpump Rules. In her newly released book, Off With My Head: The Definitive Basic Bitch Handbook to Surviving Rock Bottom — out Tuesday, April 26 — the former Bravo star, 33, chronicled her June 2020 cancelation, while being 10 weeks pregnant with daughter Hartford, after a resurfaced podcast clip of her revealing she and costar Kristen Doute told the police via a tip line that a Black woman accused of robbery could be their former costar Faith Stowers made its rounds.While Schroeder admitted she had...
CELEBRITIES・19 DAYS AGO
PopCrush

90 Day Fiancé: Before the 90 Days star Johnny Chao is showing off a new look on social media. The reality TV star rocked a fresh-faced look on the show. However, Chao debuted some new facial hair in his most recent post on Instagram. More specifically, he grew a beard and mustache.
TV & VIDEOS・19 DAYS AGO
Insider

"The sisters are clearly concerned for our brother's safety and the credibility of the brand," Khloe Kardashian wrote in a 2016 email.
LOS ANGELES, CA・20 DAYS AGO