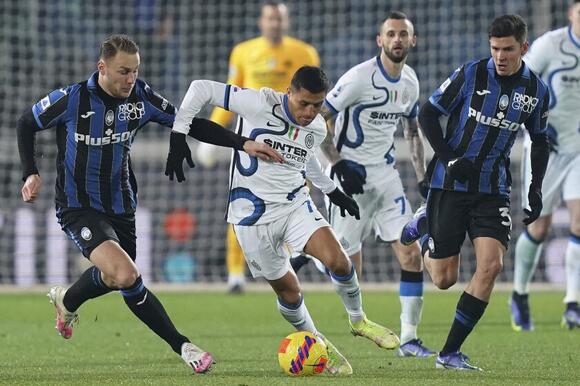 Inter Milan failed to score a goal in an Italian league match for the first time in almost a year as it was held to a 0-0 draw at Atalanta in an entertaining game on Sunday.

There were plenty of opportunities for both sides but no goals as Inter’s eight-match winning streak in Serie A was brought to an end, giving hope to the teams immediately below the defending champion.

Fresh from winning the Italian Super Cup midweek, Inter was looking to take a step toward another title.

Atalanta was missing a number of players including Josip Iličić and Ruslan Malinovskyi, who were both reportedly out with the coronavirus.

Both sides attacked from the start and Inter almost took the lead in the 26th minute but Atalanta goalkeeper Juan Musso did brilliantly to fingertip Alexis Sánchez’s strike over the bar.

Inter goalkeeper Samir Handanović did the same at the other end, early in the second half, to prevent Matteo Pessina from breaking the deadlock.

Inter had another great chance in the 66th when Edin Džeko put in an impressive cross from the left but a last-ditch tackle from Giuseppe Pezzella, almost on the line, prevented Matteo Darmian from sliding in and putting the ball into an empty net.

Sérgio Oliveira marked his debut by winning and converting a penalty to help new side Roma to a 1-0 victory over relegation-threatened Cagliari.

Oliveira, who joined on loan from Porto on Wednesday, netted in the 34th minute to help Roma end a winless streak of three matches and move into sixth spot in Serie A. Cagliari was two points from safety.

José Mourinho’s Roma came into the match on the back of two straight losses but thought it had got off to the perfect start when the referee, Lorenzo Maggioni, awarded a penalty in the fourth minute.

However, after reviewing the incident on the pitchside monitor, the referee realized that Cagliari defender Andrea Carboni had got the ball with a great tackle on Nicolò Zaniolo and he rescinded the penalty.

VAR was in Roma’s favor later in the half, however, as the referee again went to the monitor and saw that a shot from Oliveira had been blocked by Cagliari defender Dalbert with his arm.

Oliveira struck the resulting penalty into the bottom right corner.

Roma should have doubled its lead and was almost made to pay for its profligacy six minutes from time but goalkeeper Rui Patrício pulled off a sensational save to push a close-range shot from João Pedro onto the crossbar.

Nani had an immediate impact as he provided an assist moments after coming on to help Venezia rescue a 1-1 draw against Empoli.

Nani came on for his debut 18 minutes from time and the former Manchester United player set up David Okereke moments later. Szymon Żurkowski had scored the opener for Empoli in the 26th minute.