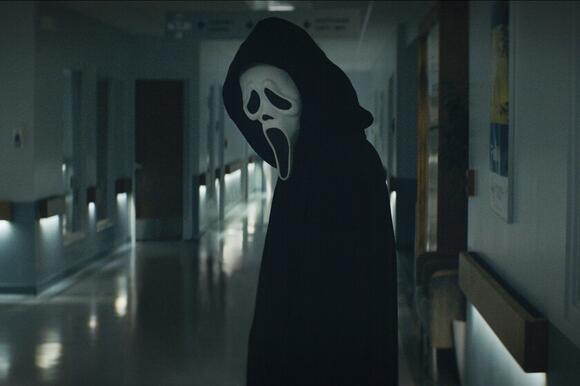 After a month at no. 1, “Spider-Man: No Way Home” has finally been overtaken at the box office. Paramount Pictures' “Scream” reboot debuted with $30.6 million in ticket sales over the weekend, according to studio estimates Sunday.

“Scream,” a self-described “requel” that is both the fifth film in the franchise and a reboot introducing a new, younger cast, led all releases over the Martin Luther King Jr. holiday weekend. Paramount forecasts that it will total $35 million including Monday's grosses. “Scream,” which cost about $24 million to make, added another $18 million in 50 international markets.

That made for a solid revival for the self-aware slasher franchise. Rights to the “Scream” films, once a reliable cash cow for Harvey and Bob Weinstein's Miramax Films, were acquired by Spyglass Media Group, which produced the new film with Paramount. This “Scream," helmed by Matt Bettinello-Olpin and Tyler Gillett, was the first not directed by Wes Craven, who died in 2015 . It features original “Scream” cast members Neve Campbell, Courteney Cox and David Arquette alongside new additions Melissa Barrera, Jenna Ortega and Jack Quaid.

Most notably, “Scream” is the first box-office success in a year that Hollywood hopes will see a return to weekly stability at movie theaters. January is typically a quiet period at the box office, but the surge of the omicron variant in COVID-19 has further upended release plans of some winter movies.

“All of our traditional measures were indicating a solid opening, but as I kept telling people: We're still in this thing and it's very difficult to determine what will actually happen,” said Chris Aronson, distribution chief for Paramount. "Now we're open, people have seen the movie and we're off and running. Hopefully this becomes another building block toward building the business back and getting it back to some semblance of normalcy."

Meanwhile, “Spider-Man: No Way Home” slipped to second place but continued to rise in the record books.

“No Way Home” grossed $20.8 million in its fifth weekend of release. Sony Pictures predicts that with another $5.2 million on Martin Luther King Jr. Day, “No Way Home” will reach a domestic cumulative total of $703.9 million Monday, edging “Black Panther” and moving into fourth place all-time. That puts it behind only “Avatar” ($760 million), “Avengers: Endgame” ($858 million) and “Star Wars: The Force Awakens” ($936 million). Globally, “No Way Home” has grossed $1.6 billion.

Universal Pictures' “Sing 2” landed in third place in its fourth weekend with $8.3 million over the three-day weekend. The animated sequel has grossed $122.1 million domestically and $96.3 million internationally.

While the debut of “Scream” could be celebrated by Paramount, which postponed most of its top 2021 releases to 2022 (movies including “Top Gun: Maverick” and “Mission Impossible 7"), its performance also typified current box-office realities. Superhero movies and genre films that appeal to younger audiences have bounced back to near pre-pandemic levels, while films skewing older haven't.

“Scream,” which received largely favorable reviews (81% fresh on Rotten Tomatoes) and a B+ CinemaScore from audiences, fared better than the last installment, 2011's “Scream 4." That film launched with $19.3 million. The audience for the new “Scream” was 42% under the age of 25, Sony said. But any success needs to pull from various demographics, and “Scream” also appealed to fans of the early franchise entries. Some 23% of ticket buyers were over 35.

The only other new widely released movie over the weekend was “Belle,” Mamoru Hosoda's critically acclaimed anime riff on “Beauty and the Beast.” It debuted with $1.6 million in 1,326 theaters.

Estimated ticket sales for Friday through Sunday at U.S. and Canadian theaters, according to Comscore.

Laughter erupted in courtroom after Johnny Depp said he doesn’t watch his own movies and couldn’t recall the question he was asked. “I don’t watch them. I feel better not watching them. What was the question again?” Mr Depp said to laughter from the room. Johnny Depp trial – latest updates“Order in the court, or I will have you removed,” Judge Azcarate said. “Understood? Thank you.”The defamation trial between Mr Depp and Amber Heard began on Monday 11 April in Fairfax, Virginia following Mr Depp’s lawsuit against his ex-wife in March 2019. Mr Depp is arguing that she defamed him...
CELEBRITIES・25 DAYS AGO
Hello Magazine

Netflix has canceled another one of its major shows, with this one getting the ax after only two seasons. Variety reports that hit sci-fi drama Raising Dion has been dropped by the streamer, following its recent season debut. The news seems to have been revealed by series star Sammi Haney, who shared the news with fans on Instagram. "Sad to say that Raising Dion is CANCELED [sic] Thank you for all of the amazing support we got from all of our wonderful fans!" Haney wrote, in part. "Season 2 was a success, equal to Season 1, even if just looking at how many people watched all of it and wanted a season 3!"
TV SERIES・23 DAYS AGO
ComicBook

After weeks of silence, Chris Rock has finally addressed his now-infamous incident with Will Smith at March's 94th Annual Academy Awards. During another sold-out show at Baltimore's Lyric Performing Arts Center on Friday, Rock directly referenced the slap, but only spent a second on it before moving on with his set.
BALTIMORE, MD・25 DAYS AGO

Once again, Disney (DIS) - Get Walt Disney Company Report is finding itself embroiled in a political quagmire owing to its support of the LGBTQ community, after Florida Gov. Ron DeSantis punished Disney for denouncing his “Don’t Say Gay Bill,” by seeking to revoke Disney World’s designation as a special tax district (which as we pointed out, is ultimately a meaningless gesture).
FLORIDA STATE・24 DAYS AGO
Insider

Depp said he discovered Disney would not recast him in "Pirates" days after Amber Heard's Washington Post op-ed article was published.
FAIRFAX, VA・25 DAYS AGO
IndieWire

Click here to read the full article. Nearly 50 years after the original “Rocky” hit theaters, the classic boxing franchise keeps getting up off the mat. Ryan Coogler breathed new life into the series with 2015’s “Creed,” which followed Sylvester Stallone’s Rocky Balboa as he trained a young boxer named Adonis (Michael B. Jordan), the son of his late rival Apollo Creed. The film earned strong reviews for taking the franchise in a modern direction while maintaining what people loved about the original films, and sequels were quickly planned. When “Creed II” was released in 2018, it cemented Michael B. Jordan’s...
MOVIES・26 DAYS AGO
The Hollywood Reporter