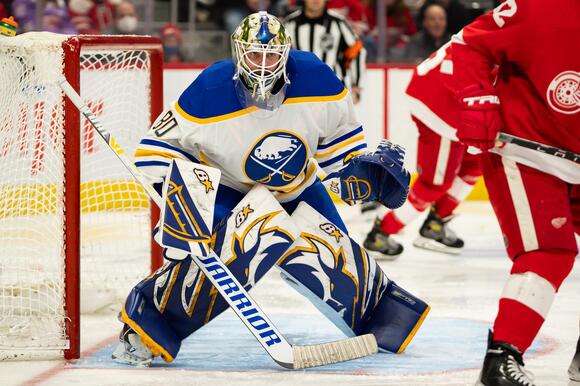 The Buffalo Sabres were no match for the Red Wings on Saturday night at Little Caesars Arena, as Detroit defended their home ice to the tune of a 4-0 shutout win.

Detroit scored their goals in pairs - two each in both the first and third periods of play.

In the opening frame, it was forwards Tyler Bertuzzi and Robby Fabbri doing the damage with their 18th and 10th goals, respectively. Both were netted on Red Wings power plays.

In the third, it was upstart rookie forward Lucas Raymond's 11th goal of the season that extended Detroit's lead over Buffalo to 3-0. The score happened just 13 seconds into the period.

Red Wings forward Michael Rasmussen capped the scoring later in the frame with his fourth goal of the season.

Sabres netminder Aaron Dell made 35 saves in the losing effort.

Second Period:
BUF: NONE
DET: NONE

﻿STATS OF THE GAME:

The script flips for the Sabres, as they'll host the Red Wings in Buffalo on Monday afternoon for a Martin Luther King Day matinee. Puck drop at KeyBank Center is set for 1 p.m. EST with pregame coverage starting at 12 p.m. EST with Brian Koziol on our sister station, The Bet 1520.

Buffalo Sabres defenseman Rasmus Dahlin and forward Rasmus Asplund got plenty of ice-time on Saturday for Team Sweden, as they managed to come away with a tournament-opening 3-1 win over Austria. Paul Hamilton has more:
BUFFALO, NY・2 DAYS AGO
WGR550

The Amerks have hit their stride at just the right time of the season.

The Amerks are a small team, but players like Peterka and Peyton Krebs have refused to be intimidated. Fitzgerald said, “We’re not afraid to play a physical game either, so we embrace it and its playoff hockey so it comes with the territory.”
ROCHESTER, NY・13 HOURS AGO
WGR550

Arttu Ruotsalainen scored his second overtime goal of this year’s Calder Cup Playoffs on Sunday to give the Rochester Americans a 2-1 lead in their best-of-five series with the Utica Comets. Paul Hamilton has more:
ROCHESTER, NY・1 DAY AGO