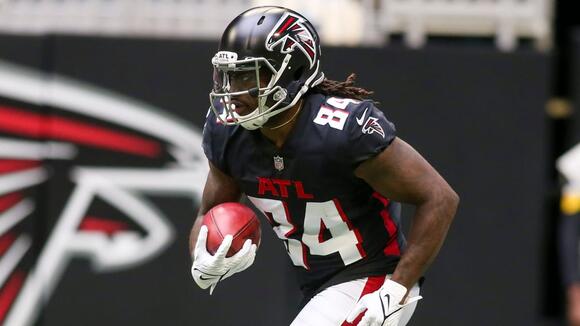 The concept of a "home-town discount'' is a fun one, a warm-and-fuzzy one. And it can happen. But ...

The easy take on the Atlanta Falcons and Cordarrelle Patterson - a one-year, $3 million free-agency jackpot for the first-year tandem of GM Terry Fontenot and coach Arthur Smith - goes something like this:

But in reality, that's how free agency and the salary cap work.

This isn't about CP being "invaluable''; this is about him being "valuable,'' and how to marry that with "affordable.''

Patterson, who led the team in rushing (618 yards) and in total touchdowns (11) while also helping with receiving yards (548), is on-record as saying he loves it here, loves how the coaching staff unleashed him, and all of that.

Over The Cap has Patterson priced at $8.8 million ...  and we're betting Atlanta won't go there. The Athletic, in fact, thinks that number is too high .

“If someone steps up with a deal in the $7 million range, it will be hard for Atlanta to match that, considering its salary-cap constraints and other areas of need,'' writes the site.

Meanwhile, SportsTalkATL smartly notes that there will be other teams with the same needs as the Falcons, but maybe more money and more desperation, who are prepared to overpay.

The concept of a "home-town discount'' is a fun one, a warm-and-fuzzy one. And it can happen. Atlanta truly does deserve a "reward'' of sorts for allowing the gifted Patterson a way to be seen as something more than a return specialist. But does Atlanta deserve millions of dollars in cap relief via Patterson's generosity as a reward?

"It really do feel like home," CP recently said. "I feel like they are really embracing the guy I can be on the football field … I really love Atlanta, man."

Patterson's appreciate for the Falcons should not be ignored. Nor should his possible belief that this organization is building something. But one thing about players in their 30's, especially ones who haven't yet be given a gigantic contract: They are running out of time to hit their own personal financial jackpot.

Which is why logic says, unfortunately, Cordarrelle Patterson is this spring probably running out of Atlanta.

The Cincinnati product appears to have the talent and intangibles to be a franchise quarterback.
ATLANTA, GA・2 DAYS AGO
Falcon Report

The Falcons have made a few moves in the wide receiver department lately.
ATLANTA, GA・2 DAYS AGO
Falcon Report

Follow along with Falcon Report for up-to-date news on the NFL firings and hirings
ATLANTA, GA・2 DAYS AGO

Terrell could get a big extension next offseason.
GREEN BAY, WI・1 DAY AGO
Sportsnaut

A grand jury indicted former Georgia linebacker Adam Anderson on Tuesday and charged him with rape. Anderson will be arraigned
NFL・22 DAYS AGO
Falcon Report

Falcons coach Arthur Smith may oversee a rebuilding situation, but he's all about winning.
ATLANTA, GA・15 HOURS AGO