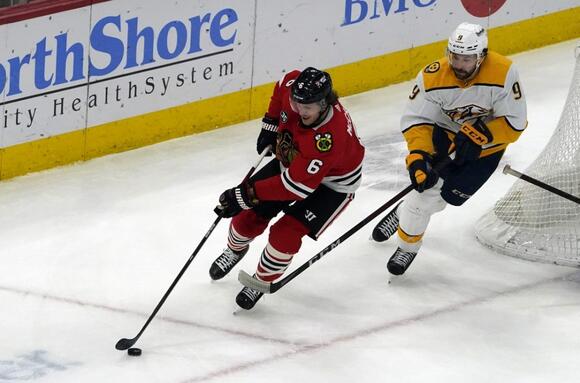 McCabe, 28, missed the team’s last three games while in protocol.

He has collected six points (three goals, three assists) in 32 games this season. He has 83 points (21 goals, 62 assists) in 385 career games with the Sabres and Blackhawks since being selected by Buffalo in the second round of the 2014 NHL Draft.

Also on Sunday, the Blackhawks recalled forward Mike Hardman and goaltender Cale Morris from Rockford of the American Hockey League and assigned them to the taxi squad. Chicago also sent forward Lukas Reichel and defenseman Ian Mitchell to the IceHogs.

The Tampa Bay Lightning can return to the Eastern Conference Finals for a third straight season with a victory against
TAMPA, FL・8 HOURS AGO
Sportsnaut

Nikita Kucherov had a goal and three assists to help the Tampa Bay Lightning beat the visiting Florida Panthers 5-1
TAMPA, FL・9 HOURS AGO

The St. Louis Blues and Colorado Avalanche will have to work through major injury concerns as their second-round Western Conference
SAINT LOUIS, MO・16 HOURS AGO
Sportsnaut

The St. Louis Cardinals hope they have saved some runs for the opener of a two-game set with the Toronto
SAINT LOUIS, MO・2 HOURS AGO

Twins look to remain on roll vs. Tigers

Chad Kuhl once was part of the future of the Pittsburgh Pirates’ rotation. On Monday, the right-hander returns to face
PITTSBURGH, PA・7 HOURS AGO
Sportsnaut

The Cincinnati Reds return home after their first winning road trip of the season, while the Chicago Cubs begin a
CHICAGO, IL・7 HOURS AGO

Rapids extend home unbeaten streak to 23 with win over Sounders

Jonathan Lewis was credited with the lone goal, and the Colorado Rapids increased their home unbeaten streak to 23 matches
SEATTLE, WA・10 HOURS AGO
Sportsnaut

The NBA fined the Dallas Mavericks $100,000 on Sunday for continuing to violate league rules on bench decorum. The latest
DALLAS, TX・20 HOURS AGO
Sportsnaut

Down 2-0 in the Western Conference finals, the Dallas Mavericks have an aggressive game plan for Game 3 at home
SAN FRANCISCO, CA・1 DAY AGO
Sportsnaut

For the third time this postseason, the Dallas Mavericks’ organization faces a fine for how it has handled itself on
DALLAS, TX・20 HOURS AGO