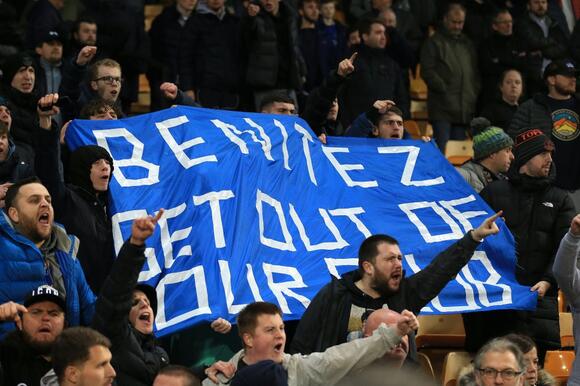 When it comes to news like Rafa Benitez’s sacking at Everton , much of the story usually centres on how “upbeat” the players now are, and how they felt he was taking them down.

That is true, but this whole episode is really about something so much bigger. If the football side of the club finally sees sense, it should be the start of something new; a proper fresh start. It kind of has to be, since the hierarchy of the club has been hollowed out as a consequence of Benitez.

That is his “legacy”.

Benitez’s entire reign was really the end result of a series of bad decisions, where Everton were almost manoeuvred into an appointment that made no logical or emotional sense. And yet there they were.

There is then, of course, the nature of that yesterday, which was one big emotional reason Benitez could never be good at Goodison Park.

He is one of Liverpool’s great figures, responsible for perhaps their finest ever moment as a club, in Istanbul in 2005.

That immediately and understandably set Everton supporters against him, and meant the whole situation was going to be much more difficult if he ever ran into poor form. That is exactly what happened, culminating in the farcical scene of a fan trying to get at him at Carrow Road .

He was always up against it. Given Benitez usually looks to connect himself to the fans, it remains surprising he took it. Why risk his own legacy with Liverpool?

It is just baffling why Everton took the decision, though.

People can say that’s an immature or blinkered mindset, but it isn’t. It’s what a club is all about. Elements like your cherished figures and your relationship with your rivals are what make a club culture. It’s what fosters an emotional connection. It matters. It’s why people go.

The Everton board’s decision to give Benitez job was a callous dismissal of all this, as well as an insult to the fans. It is easy to understand why they were aggrieved. It’s one of many reasons Benitez had to go.

But then that’s the wider problem, too. Everton ended up in a situation where it seemed to make some sort of sense, because they have no football culture.

They are a club, as much as anyone else in Europe, who badly need a reset and a huge reassessment. The past few years have been a model for how not to run a club.

There’s been so much waste.

Perhaps swayed by their own past as one of England’s most successful clubs, and emboldened by improved finances, it was as if they just tried to “act like a big club” by spending. 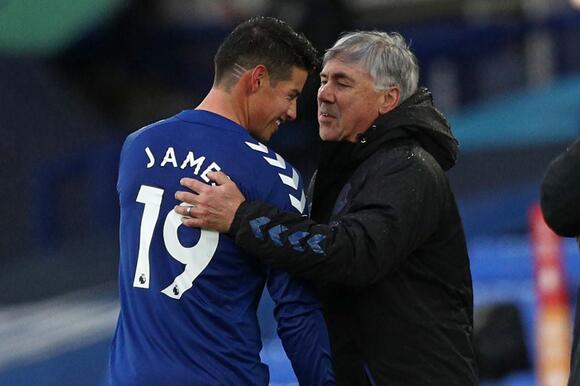 There was a fundamental problem here, though: they were getting involved in an arms race they could never win.

Everton were further behind the top clubs and don’t have as much money as them. Trying to do similar was just never going to work. As Manchester City’s chief executive Ferran Soriano once told a room of football people, if you’re trying to catch up, you have to try a different route.

But this is another side of it. Everton didn’t seem to have the football intelligence to go a different route. Or, at least, those with some good ideas – like Marcel Brands – were ignored and ultimately jettisoned. Farhad Moshiri is described by figures who have worked with the club as too reactive, too seduced by big names, and too influenced by the stands. The latter is ironic, since the crowd have recently been the angriest in the league - for good reason - and very little of what is done pleases them.

As such, Everton didn’t just fail to catch up with the “big six”, in entirely predictable fashion.

They got outpaced by clubs like Brighton and Hove Albion and so many others with real forward-thinking models. Even West Ham United, previously a model for dysfunction, now look like Borussia Dortmund 2011 next to Everton.

David Moyes, pointedly, would probably consider a return to Goodison Park a regression in so many ways now.

And so they have the big question of what next.

The Premier League’s riches mean they could easily afford a mid-tier European manager, but this is a situation where they should use the opportunity for a rethink. They should appoint an interim, or give the temporary job to Duncan Ferguson, to think about what next. 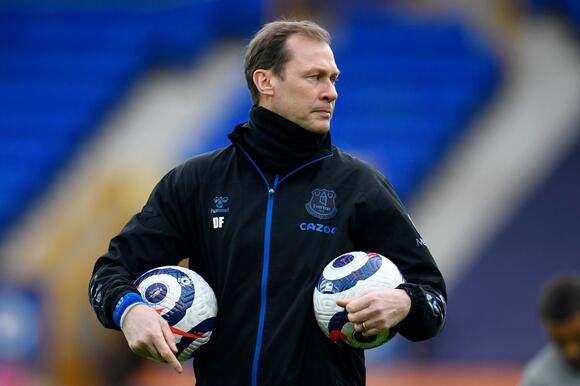 They need to sit around and be realistic about what they are as a club, where they want to go, and how to get there.

That means getting ahead of the game. That means setting a football identity they work to, and showing necessary patience with it, reconstructing the club towards that.

An irony is that this might have suited Brands.

Another irony is that the club’s culture away from the football, and especially when it comes to work in the community, is hugely admirable.

In the meantime, nobody can deny that Benitez needed to go. His sacking, however, is ultimately about so much more than his own failings.

There is no reason Everton can’t be an even higher-scale Leicester City, punching above their weight, winning trophies – but all amplified by the fact they were a wealthier club with a weightier history. The present, however, is just bad decision after bad decision.

Frank Lampard has insisted Everton are not a dirty team, despite the club getting the most red cards in the Premier League during his reign.Everton have had five players sent off since Lampard’s appointment in January and were reduced to nine men in Sunday’s 3-2 defeat by Brentford when Jarrad Branthwaite and Salomon Rondon got their marching orders.Jonjoe Kenny, Allan and Michael Keane have also seen red in recent weeks but while Lampard accepted Rondon was guilty of a poor tackle, he attributed the others to “footballing mistakes.”Their relegation rivals Leeds have had Luke Ayling and Dan James given straight...
PREMIER LEAGUE・8 HOURS AGO
The Independent

The Football Association is investigating video footage which appears to show Sheffield United’s Oli McBurnie stamping on a Nottingham Forest fan.The incident occurred when fans invaded the pitch at the City Ground after Forest had beaten the Blades on penalties in the second leg of Tuesday night’s Championship play-off semi-final.A video circulating on social media shows McBurnie, sidelined through injury, tangling with a supporter who had fallen to the ground.Forest fans had poured on to the pitch in celebration after their side’s penalty shootout win secured their place in the play-off final at Wembley.The FA confirmed to the PA news...
PREMIER LEAGUE・7 HOURS AGO
The Independent

Eddie Howe has revealed one of the hardest parts of being Newcastle manager is having to say goodbye to his children.The 44-year-old father of three has spent the last seven months combining his parental duties with the task of keeping the Magpies in the Premier League with the latter objective having been accomplished handsomely and to popular acclaim.Howe, who replaced Steve Bruce at the St James’ Park helm in November last year, has commuted between the north-east and his home in Dorset, where his wife Vicki and their three sons, aged 10, seven and three, have remained amid the search...
PREMIER LEAGUE・7 HOURS AGO
The Independent

Rangers suffered penalty shootout heartache in Seville as Eintracht Frankfurt came from behind to win the Europa League.Joe Aribo put the Rangers fans in dreamland when he slotted home following a slip in the German side’s defence in the 57th minute.Frankfurt levelled 12 minutes later when Rafael Borre knocked the ball home from close range following a low cross.Gers finished extra-time strongly and Ryan Kent was denied at close range before Steven Davis had a shot cleared off the line, while James Tavernier had a free-kick saved in stoppage-time of the 1-1 draw.Aaron Ramsey, a 117th-minute substitute, saw his spot-kick saved and Borre netted to seal a 5-4 shootout win. Read More Live updates: PM ‘dithering’ on windfall tax, says StarmerBrexit has increased risk of danger foods reaching UK, watchdog warns
SPORTS・7 HOURS AGO

Crystal Palace manager Patrick Vieira has promised to seek talks with midfielder Cheikhou Kouyate over the reason behind his messages of support on social media to compatriot Idrissa Gueye.Gueye has come under fire after he failed to feature in Paris St Germain’s 4-0 win over Montpellier on Saturday, which was the weekend Ligue 1 had chosen for its clubs to show solidarity ahead of International Day Against Homophobia, Biphobia and Transphobia this week.The French side wore rainbow-coloured numbers to show their support for the LGBTQ+ community but Gueye was absent for “personal reasons” having also missed the corresponding fixture last year.Kouyate...
PREMIER LEAGUE・7 HOURS AGO
The Independent

The libel battle between footballers’ wives Rebekah Vardy and Coleen Rooney has played out over six days at the High Court in London.As the trial reaches its final day on Thursday, the PA news agency takes a look back at the key moments from each day so far.Day One– The much-anticipated trial of the ‘Wagatha Christie’ libel claim begins. Rebekah Vardy arrives at the High Court in London with a security guard, while Coleen Rooney attends with husband Wayne Rooney.– The legal teams representing each of the women set out their cases for Mrs Justice Steyn, the judge hearing the...
U.K.・4 HOURS AGO
The Independent

For weeks, Seville had been the destination for Rangers’ European journey and it was here at the Ramon Sanchez Pizjuan where it came to a sudden and crushing end. Joe Aribo’s second-half finish had put Rangers within touching distance of a first European trophy in 50 years, but Eintracht Frankfurt equalised, took it to penalties and it was there where this once-in-a-generation final went the way of the German side.Ryan Kent had the chance to win it in the dying seconds of extra time, the opportunity to claim the Europa League there for the taking. He was denied by the...
SOCCER・4 HOURS AGO
The Independent

Football fans caught with cocaine will be banned from attending matches for five years, under new government plans.In changes expected be rolled out during the next football season, those convicted of supplying or being in possession of class A drugs could also be forced to surrender their passports when their team is playing abroad.Warning of an “ugly violence” at some football games this season, which “has shocked all the leagues”, the goverment’s policing minister Kit Malthouse claimed that “more and more the police are finding class A drugs at the heart of that disorder”, adding: “We must act.”The new punishments...
SOCCER・6 HOURS AGO