Over the past decade, cryptocurrency has effectively conjured a brand new economy out of thin air. Understandably, it has become a rather controversial asset class, with smart people arguing for and against it. Even so, no one can deny the wealth this emerging asset class has created. In the last year alone, the crypto market has skyrocketed 109% to $2.1 trillion.

However, enthusiasm for more speculative assets has waned in recent months as high inflation and the prospect of rising interest rates have driven investors to look for safer alternatives. To that end, despite tremendous gains in the past year, the crypto market currently sits 29% below its all-time high.

Here's the silver lining: Every past downturn has proved to be a buying opportunity , and there are dozens of cryptocurrencies worth owning. For instance, Cardano (CRYPTO: ADA) and Fantom (CRYPTO: FTM) look like smart-long term investments. Here's why. 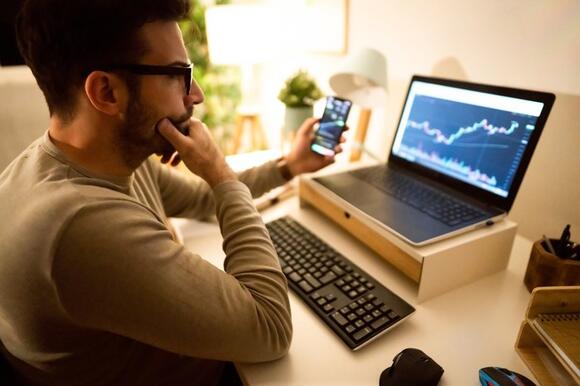 Cardano is a programmable blockchain powered by the ADA token, which currently ranks as the seventh-most-valuable cryptocurrency. In 2015, the project was started by Charles Hoskinson shortly after he left Ethereum (CRYPTO: ETH) . Cardano aims to be a better version of Ethereum, and it differentiates itself in three ways.

First, the developer team has taken an academic approach to building the blockchain. Rather than rushing to complete the platform, the Cardano project was divided into five phases, focusing on the foundation, decentralization, smart contracts, scalability, and governance. Moreover, the team frequently submits research papers for academic peer review, taking an evidence-based approach to development.

Second, Cardano is secured by an eco-friendly proof of stake consensus protocol known as Ouroboros. In that system, validators stake tokens to ensure their honesty, as that stake will be forfeited in the event of fraud or an attempted attack. Unlike proof of work consensus, where miners compete based on computing power, Ouroboros randomly selects validators to add new blocks to the chain, thereby securing the network with reduced energy consumption.

Third, the upcoming fourth phase of development -- expected to begin in late 2022 or 2023 -- will feature Ouroboros Hydra, a scaling solution that will add multiple side chains to the core blockchain. In other words, Hydra will add additional blockchains to the platform, dividing network traffic more efficiently. In turn, Hydra will boost throughput from its current 250 transactions per second (TPS) to a theoretical 1 million TPS. That would make Cardano one of the fastest and most scalable blockchain platforms, and maybe even the top performer.

So what's the investment thesis? Cardano has roots in peer-reviewed academic research. Its Ouroboros consensus protocol is energy efficient and highly scalable. As of Sept. 12, 2021, smart contracts are live on the blockchain, meaning an ecosystem of dApps and decentralized finance (DeFi) services should blossom in the near future. However, those products aren't free. Users pay transaction fees using the blockchain's native cryptocurrency. In other words, as dApps and DeFi products on Cardano become more popular, demand for ADA should rise, pushing its price higher.

Fantom brands itself as a high-throughput smart contracts platform for digital assets and dApps. The project aims to resolve two key limitations frequently found in other blockchains: a lack of scalability and a lack of interoperability. To do that, Fantom relies on a unique proof of stake consensus mechanism known as Lachesis, a protocol that allows validators on the network to calculate the time order of events independently. That means each node (computer) can achieve consensus without waiting for confirmation from every other node. In turn, that makes Fantom very fast.

In fact, Fantom can handle thousands of transactions per second (TPS), and those transactions are finalized in about one second. For perspective, Ethereum -- the largest dApp and DeFi ecosystem by a wide margin -- can handle about 14 TPS and it takes six minutes for those transactions to reach finality (i.e. be incorporated into the blockchain). That means Fantom is far more scalable than Ethereum, which could help it take market share.

Furthermore, Fantom is also compatible with Solidity, the programming language used to build smart contracts on Ethereum. That means developers can easily port their Ethereum-based dApps over to the Fantom blockchain, where performance is better and fees are lower. Not surprisingly, developers and investors have taken note, and Fantom actually ranks as the sixth-largest DeFi ecosystem, with over $7.1 billion invested on the platform.

10 stocks we like better than Cardano
When our award-winning analyst team has a stock tip, it can pay to listen. After all, the newsletter they have run for over a decade, Motley Fool Stock Advisor , has tripled the market.*

They just revealed what they believe are the ten best stocks for investors to buy right now... and Cardano wasn't one of them! That's right -- they think these 10 stocks are even better buys.

The market has shunned growth stocks, creating an opportunity to buy them at huge discounts.
STOCKS・1 DAY AGO
The Motley Fool

One is a market leader. The other is an up-and-coming player.
MARKETS・2 DAYS AGO

They're all available for bargain prices right now.
STOCKS・1 DAY AGO
The US Sun

MILLIONS of Americans are set to receive Social Security checks worth up to $1,657 tomorrow. The cash boost will come just 48 hours before Supplemental Security Income payments, worth up to $841, are set to land in around eight million bank accounts on April 29. Seniors with birthdays on the...
BUSINESS・21 DAYS AGO
dailyhodl.com

Silk Road founder Ross Ulbricht is forfeiting billions of dollars worth of Bitcoin (BTC) and other crypto assets to the US government. According to a new court filing, Ulbricht will relinquish any claim to over 69,000 BTC and undisclosed amounts of Bitcoin Gold (BTG), Bitcoin SV (BSV) and Bitcoin Cash (BCH) worth a combined $3 billion as part of a settlement.
PUBLIC SAFETY・22 DAYS AGO
electrek.co

As part of a lawsuit between shareholders and Elon Musk regarding his “funding secured” tweet, new text messages and emails between Musk and people involved have been released. The communications pretty much confirmed how most people saw the situation: Elon Musk took a meeting with the head of...
BUSINESS・22 DAYS AGO

These passive income powerhouses, with yields ranging from 4.4% to 11.9%, can generate some serious wealth for patient investors.
STOCKS・2 DAYS AGO
Inc.com

Buying these stocks on the dip could result in big returns for investors.
STOCKS・1 DAY AGO
The Motley Fool

Why This Pioneering E-Commerce Stock Is a High-Conviction Pick

Why Zoom Stock Can Rebound Despite a Recent Slide

How will Zoom reinvent itself?
STOCKS・2 DAYS AGO
The Motley Fool

This Stock Is Like a Mini-Berkshire Hathaway, and It Could Soar Soon

Is Boston Omaha a buy?
STOCKS・2 DAYS AGO
The Motley Fool

1 Strong Social Media Stock With Tons of Growth Ahead

Monetizing its international users could be a game-changer for this social media giant.
STOCKS・2 DAYS AGO
The Motley Fool

These beaten-down tech stocks look like bargains for the long-term investor.
STOCKS・8 HOURS AGO