The price of Dogecoin (CRYPTO: DOGE) is sinking in Sunday's trading. The cryptocurrency was down 5.7% over the previous 24-hour period as of 11:45 a.m. ET.

With Bitcoin and Ethereum roughly flat over the previous day of trading and the broader cryptocurrency market looking uncharacteristically stable, Dogecoin's sell-off likely stems from investors taking profits after recent gains. The token began climbing early in the week and posted even bigger gains after Tesla CEO Elon Musk announced that his electric-vehicle company would accept DOGE as payment for its merchandise. Now, the popular meme cryptocurrency seems to be taking a breather. 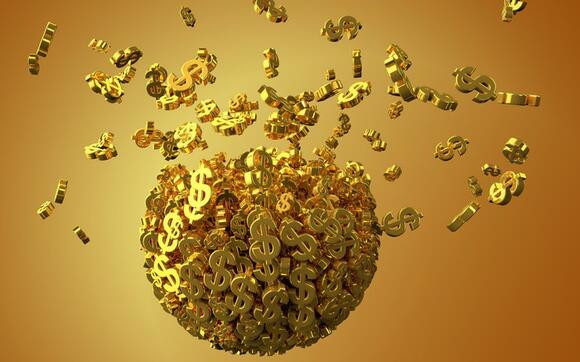 Over the last year, Elon Musk has been a Dogecoin holder's best friend. The famous executive has hinted at, and directly expressed, support for the token through Twitter messages and other channels, and his comments have frequently powered impressive gains for the meme-powered cryptocurrency. Even with the recent pullback, Dogecoin is still up roughly 19% over the last seven days.

After Musk published a Tweet on Jan. 14 announcing that Dogecoin could be used to purchase Tesla merch, the token's price quickly spiked 25%. While there doesn't appear to be any coin-specific news behind the cryptocurrency's pullback on Sunday, it's not surprising to see Dogecoin give up some ground on the heels of the recent pop.

Dogecoin trades down roughly 75% from the lifetime high that it hit last May. Yet, even after recent volatility in the broader cryptocurrency space and substantial draw downs for its token price, the cryptocurrency is still up roughly 1,900% over the last year. 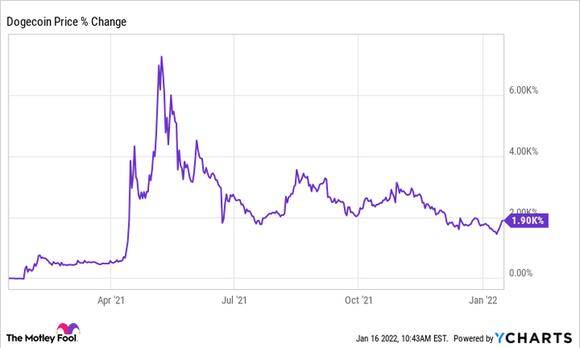 Dogecoin was started as a campy, dog-themed clone of Bitcoin, but the token went on to deliver seriously impressive returns for investors who got in before its massive pricing surge. The token currently has a market capitalization of roughly $23.6 billion and ranks as the 11th largest cryptocurrency by valuation.

While Ethereum, Solana , and Cardano have underlying blockchain service networks that help shape the performance of their respective cryptocurrencies, the pricing drivers for Dogecoin are currently limited to coin adoption and speculation. If more companies begin accepting the token as a payment method or more trading platforms introduce the option to buy and sell the cryptocurrency, that could help to send Dogecoin higher. However, investors should proceed with the understanding that Dogecoin is a high-risk investment, and its trading will likely continue to be highly volatile.

Strong price performance from these three large-cap tokens has investors excited about the near-term prospects of this sector.
STOCKS・1 DAY AGO
dailyhodl.com

Silk Road founder Ross Ulbricht is forfeiting billions of dollars worth of Bitcoin (BTC) and other crypto assets to the US government. According to a new court filing, Ulbricht will relinquish any claim to over 69,000 BTC and undisclosed amounts of Bitcoin Gold (BTG), Bitcoin SV (BSV) and Bitcoin Cash (BCH) worth a combined $3 billion as part of a settlement.
PUBLIC SAFETY・26 DAYS AGO
electrek.co

As part of a lawsuit between shareholders and Elon Musk regarding his “funding secured” tweet, new text messages and emails between Musk and people involved have been released. The communications pretty much confirmed how most people saw the situation: Elon Musk took a meeting with the head of...
BUSINESS・26 DAYS AGO
inputmag.com

It may not be as scary as homeowners expect.
REAL ESTATE・2 DAYS AGO
Inc.com

Jeff Bezos, the founder and former CEO of Amazon, and Elon Musk, the CEO of Tesla and soon-to-be owner of Twitter, don't strike me as best buds. The two men have competed over the past few years for the title of the world's richest man, a title Musk holds. They also sort of compete in space, with Bezos' Blue Origin competing against Musk's SpaceX.
BUSINESS・25 DAYS AGO
Entrepreneur

This 5%-yielding bank has exposure to emerging markets layered on a strong core in a safe country.
STOCKS・1 DAY AGO

You could make even more with several of the stocks continuing to soar this year.
STOCKS・16 HOURS AGO
The Motley Fool

This healthcare stock looks like a bargain today.
STOCKS・14 HOURS AGO
The Motley Fool

Three companies that can beat the market in the coming years.
STOCKS・1 DAY AGO