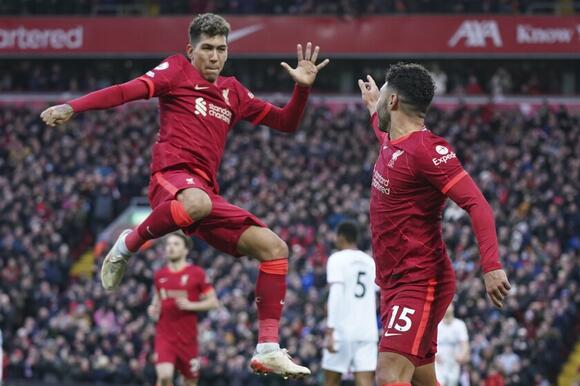 Liverpool found the goalscoring alternatives needed in the absence of Mohamed Salah and Sadio Mane as their stand-ins stepped up in a 3-0 Premier League win over Brentford on Sunday.

Midfielder Fabinho proved an unlikely solution with his third goal in eight days with the opener just before halftime. Alex Oxlade-Chamberlain and substitute Takumi Minamino netted in the second half.

A 0-0 draw against 10-man Arsenal in the League Cup on Thursday had raised questions about how Jürgen Klopp’s side would cope while Salah and Mane remain at the African Cup of Nations, but this result offered more hope for the coming weeks.

With a first clean sheet in five league matches and a first league win since mid-December, Liverpool moved above Chelsea in second place but 11 points behind Manchester City with a game in hand.

Corners have proved an area of frustration in recent weeks for Liverpool, rarely threatening at all. So for the opener to come from a set-piece was something of a boost.

Trent Alexander-Arnold produced his 10th assist in 21 matches with the corner from which Fabinho headed home at the far post in the 44th minute.

Since the start of the 2018-19 season, only Bayern Munich’s Thomas Muller (64) and Paris Saint-Germain’s Lionel Messi (47) have had more assists in Europe’s big five leagues than the right back (42).

Bryan Mbeumo wasted an opportunity to equalize early in the second half when he missed the target with only goalkeeper Alisson Becker to beat.

It was his last intervention as he departed with an ankle injury to further increase Klopp’s headache up front.

But his replacement, Minamino, made an instant impact by side-footing the ball into the net in the 77th after a mistake in the Brentford defense.

The London club remained 10 points above the relegation zone.

‘What can I do?’ asks the Australian after a straight-sets defeat to 13-time French Open champion Rafael Nadal
TENNIS・2 HOURS AGO