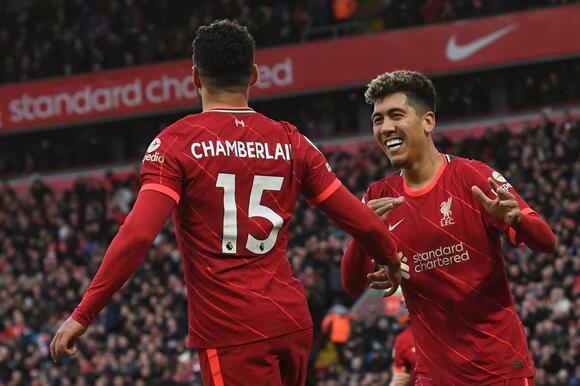 Jurgen Klopp burst towards the Kop, furiously fist-pumping to illustrate the importance of victory against Brentford. This wasn’t a blockbuster game, nor blockbuster opponents but Liverpool’s manager knows the fight and three points can be vital signs for the rest of the season.

A first win in four league matches came on his 350th outing in charge of the club, catapulting them above Chelsea in second, but it wasn’t without heaps of toil.

Virgil van Dijk kissed Fabinho ’s head, a symbol of relief as Anfield broke into rapture. They had probed and probed some more. They had come close and then started to come unstuck as Brentford began to show aggression beyond defensive resistance in their own box.

Finally, on 44 minutes, Trent Alexander-Arnold’s corner had evaded the visitors’ defiance and was headed in at the back post by Fabinho.

Liverpool had a goal, a start to shaking off the feeling that it was going to be “one of those days”.

Klopp used his pre-match briefing and programme notes to remind the world – and instructively his players – of the wonder they have seen without Mohamed Salah and Sadio Mane, who are away on African Nations Cup duty.

Their absence was defining the narrative around Liverpool and the manager sort to redirect it for psychological reasons, recalling the 4-0 Champions League triumph over Barcelona as a start.

It was an opportunity, Klopp said, for others to step into the spotlight. Alex Oxlade-Chamberlain, stationed in the front three, did exactly that by scoring the safety goal and creating three chances in a dynamic performance despite Brentford’s obstruction.

But then, as has been the case during his cruel Liverpool career, he was replaced with what looked to be an ankle injury.

Takumi Minamino, his replacement, was offered a birthday gift upon arrival. Brentford opted to play out from the back under excessive pressure, with Roberto Firmino cutting out Alvaro Fernandez’s pass to Christian Norgaard. He laid off for the Japan international, who casually rolled home.

The battle for Liverpool had suddenly become a stroll. The first half had seen a Van Dijk chance cleared off the line, Diogo Jota be an absolute nuisance for markers, and Alexander-Arnold’s hit measure a smidge too high as the hosts camped in Brentford’s area.

Before Fabinho’s all-important breakthrough, however, Vitaly Janelt went just over and Ivan Toney just wide of the left-hand post.

Liverpool’s goals materialised at the most crucial junctures. Oxlade-Chamberlain’s movement between Ethan Pinnock and Sergi Canos to head in Andy Robertson’s ball came after frustration for the Anfield side as a raft of openings were thwarted.

Jota hitting the post was one of those, while Brentford’s designs on causing chaos and an upset grew.

Bryan Mbeumo and Toney threatened, but Oxlade-Chamberlain’s goal reduced their defiance before Minamino’s effort eradicated it.

Liverpool manager Jurgen Klopp has confirmed striker Divock Origi will leave at the end of the season.The Belgium international has not played enough matches to trigger an extension to his contract and has been heavily linked with a move to AC Milan.Despite his lack of playing time Origi has become something of a cult hero to the Kop after his goals against Everton, particularly his 96th-minute winner at Anfield in December 2018, and his double in the famous 4-0 Champions League semi-final comeback against Barcelona.Asked about what send-off the players who could leave in the summer – veteran midfielder James...
PREMIER LEAGUE・3 HOURS AGO
The Independent

Brighton boss Graham Potter says Pascal Gross and Danny Welbeck are close to agreeing new deals at the Amex Stadium.The future of the Seagulls pair had been uncertain, with their current contracts set to expire in the summer.Potter, whose side finish the Premier League campaign at home to West Ham on Sunday, expects extensions to be announced imminently.“Pascal and Danny are really close, I think, to agreeing everything for next year,” he said.“I think it’s just a matter of time, a bit of formality, so that’s great.”Creative midfielder Gross, 30, has scored 16 Premier League goals and provided 26 assists...
PREMIER LEAGUE・1 HOUR AGO
The Independent

A return to perimeter fencing is not the answer to tackling pitch invasions and would represent “a failure of us all”, the UK’s football policing lead has said.Recent matches in the Premier League and the EFL have been marred by pitch invasions, and in some cases fans have clashed with players and other club staff after coming onto the field.Newcastle manager Eddie Howe has warned a failure to tackle the issue could end in tragedy, and the Professional Footballers’ Association has issued a fresh statement calling on the football and police authorities to take a tough stance on anyone invading...
PREMIER LEAGUE・1 HOUR AGO
The Independent

Ralf Rangnick hopes to bring the curtain down on his interim reign by securing Europa League qualification in front of new Manchester United boss Erik ten Hag, who he will meet this weekend after detailed WhatsApp conversations.A sense of hope around Old Trafford at the start of the season quickly disappeared, with 1999 treble hero Ole Gunnar Solskjaer sacked in November and his temporary replacement failing to get things on track.United have long since been out of the race for Champions League qualification and head to Crystal Palace on Sunday knowing they have to match West Ham’s result to avoid...
PREMIER LEAGUE・1 HOUR AGO

Everton manager Frank Lampard will immediately turn his attention to making his squad better and more balanced as he knows without that they could find themselves battling relegation again.The Toffees escaped losing their top-flight status for the first time in 71 years with a dramatic 3-2 win over Crystal Palace on Thursday which secured their future after a season of struggles.But despite the wild scenes at the final whistle, Lampard is well aware the reason they were in such a mess was down to poor performances, and he is keen to address that through recruitment and retention.“It has obviously been...
PREMIER LEAGUE・1 HOUR AGO
The Independent

Ralph Hasenhuttl insists Southampton can have no complaints with their position in the Premier League following their collapse in results.Saints travel to Leicester for their final match of the campaign knowing they can finish no higher than their current position of 15th. And should they lose with Everton winning at Arsenal, they could drop to 16th.As recently as February they sat on the cusp of the European places, only to plummet down the table through a run of nine defeats in 12 matches, a sequence containing just one win.Relegation has been averted, but Hasenhuttl accepts it has been an unsatisfactory...
PREMIER LEAGUE・45 MINUTES AGO